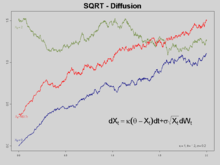 In mathematical finance, the Cox–Ingersoll–Ross model (or CIR model) describes the evolution of interest rates. It is a type of "one factor model" (short rate model) as it describes interest rate movements as driven by only one source of market risk. The model can be used in the valuation of interest rate derivatives. It was introduced in 1985 by John C. Cox, Jonathan E. Ingersoll and Stephen A. Ross as an extension of the Vasicek model.

where Wt is a Wiener process modelling the random market risk factor.

The drift factor, a(b − rt), is exactly the same as in the Vasicek model. It ensures mean reversion of the interest rate towards the long run value b, with speed of adjustment governed by the strictly positive parameter a.

, avoids the possibility of negative interest rates for all positive values of a and b. An interest rate of zero is also precluded if the condition

Under the no-arbitrage assumption, a bond may be priced using this interest rate process. The bond price is exponential affine in the interest rate:

Time varying functions replacing coefficients can be introduced in the model in order to make it consistent with a pre-assigned term structure of interest rates and possibly volatilities. The most general approach is in Maghsoodi (1996). A more tractable approach is in Brigo and Mercurio (2001b) where an external time-dependent shift is added to the model for consistency with an input term structure of rates. A significant extension of the CIR model to the case of stochastic mean and stochastic volatility is given by Lin Chen(1996) and is known as Chen model. A CIR process is a special case of a basic affine jump diffusion, which still permits a closed-form expression for bond prices.