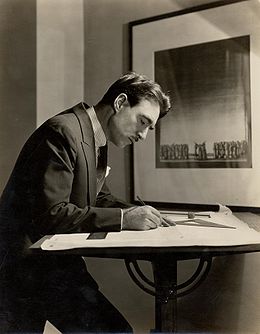 A costume designer or costume mistress/master is a person whose responsibility is to design costumes for a film or stage production. He or she is considered an important part of the "production team", working alongside the director, scenic and lighting designers as well as the sound designer. The costume designer might also collaborate with a hair/wig master or a makeup designer. In European theatre the role is somewhat different as the theatre designer will design both costume and scenic elements.

Costume designers will typically seek to enhance a character's personality, and/or to create an evolving plot of colour, changing social status or period through the visual design of garments and other means of dressing, distorting and enhancing the body - within the framework of the director's vision. At the same time, the designer must ensure that the designs allow the actor to move in a manner consistent with the historical period and enables the actor to execute the director's blocking of the production without damage to the garments. Additional considerations include the durability and washability of garments, particularly in extended runs. The designer must work in consultation with not only the director, but the set and lighting designers to ensure that the overall design of the production works together. The designer needs to possess strong artistic capabilities as well as a thorough knowledge of pattern development, draping, drafting, textiles and costume/fashion history as well as awareness of poise when in period dress, and be sensitive to the creative direction that the performer wants to take his/her character.

A costume designer creates the look of a character in film , television or in a stage production and in plays. Their main duties are...

1. Read and analyze the script.

2. Work closely with the director and other designers (set designer, lighting designer, make-up artist) on the production team to develop design concepts.

3. Do research to flesh out design concepts. (for example, geographical setting, time period, characters and their relationships and actions)

5. Meet with the wardrobe manager and head cutter to discuss each design.

7. Develop and implement a budget for costume-related expenses.

8. Develop patterns for costumes if it is necessary.

9. Attend fittings and rehearsals. (for theatre, dance or opera productions).

Both residential and academic designers are generally also required to act as Shop Master or Mistress of an onsite costume shop, in addition to designing productions. In a resident theatre, there is almost always a shop staff of stitchers, drapers, cutters and craft artisans. In an academic environment the shop "staff" is generally students, who are learning about costume design and construction. Most universities require costume design students to work a specified number of hours in the shop as part of their course work.

USA is the union that represents costume designers. Although most professional designers are union members, USA has relatively few collective bargaining agreements with theatres when compared with other theatrical unions. However, most major US opera companies do have CBAs with USA. The majority of union contract work for designers is on a project by project basis, not as a part of Collective Bargaining Agreements with theatrical establishments.