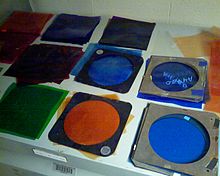 Many color gels organized, some in gel frames

A color gel or color filter (UK spelling: colour gel or colour filter), also known as lighting gel or simply gel, is a transparent colored material that is used in theatre, event production, photography, videography and cinematography to color light and for color correction.[1] Modern gels are thin sheets of polycarbonate or polyester, placed in front of a lighting fixture in the path of the beam.[2]

Gels have a limited life, especially in saturated colors. The color will fade or even melt, depending upon the energy absorption of the color, and the sheet will have to be replaced. In permanent installations and some theatrical uses, colored glass filters or dichroic filters are being used. The main drawbacks are additional expense and a more limited selection.

In Shakesperean theatre, red wine was used in a glass container as a light filter. In later days, colored water or silk was used to filter light in the theater. Later, a gelatin base became the material of choice. Gelatin gel was available at least until 1975. The name gel has continued to be used to the present day. More heat-tolerant self-extinguishing acetate-based materials (marketed as Cinemoid and Roscolene) were developed to deal with higher output light sources. This material fell out of favor, since it could not withstand the higher temperatures produced by the tungsten halogen lamps that came into widespread use in the late 1960s. The acetate-based material was replaced by polyester and polycarbonate based gels. Those materials have superior heat tolerance when compared to acetate-based gels. Polyester "gels" were introduced in 1969 as Gelatran, the original deep dyed polyester. The Gelatran process is still used today to create GAMColor. Other color manufacturers, such as Lee Filters and Apollo Design Technology use polyester as their color substrate. Lee and Apollo use the surface dyed process. Roscolux is 70% polycarbonate and 30% deep dyed polyester. Almost every color manufacturer today uses either polycarbonate or polyester to manufacture their "gels". Even today's gels can burn out (to lighten in color starting in the center) easily, rendering them useless. To help combat this, a high temperature (HT) material (polyester having the highest melting point 480 °F (250 °C)), can be used to help prolong the life in high-heat output lighting instruments. As instrument design improves, it has become a selling point on many lights to have as little heat radiating from the front of the fixture as possible to help prevent burn-through, and help keep the stage and actors cooler during performances. 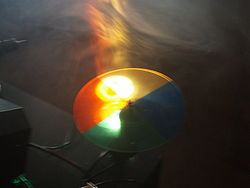 In the theater, gels are typically available in single 20×24-inch (500×600 mm) sheets, which are then cut down to the appropriate size before use. The size originates from the gelatin days: it is the same as a standard baker's sheet, which was used to cast the sheets. In the film industry, gels are usually cut straight from rolls 24" or 48" (600 mm or 1200 mm) wide and 50' (16 m) long, as the size required may vary from a couple of inches to gel a Dedolight or a practical halogen spotlight in a ceiling to many feet to gel a whole window, so a standard sized sheet would be impractical.

Similar colors may vary between different companies' formulations - for example, many have a color named "bastard amber", but the transmitted color spectrum may be different. For this reason, gel colors are not referred to by name. Using nature’s color spectrum as a guide, Apollo Design Technology uses a four digit number to designate and locate specific color transmissions: Visible Spectrum.[3] Some manufacturers use a code consisting of a letter and number combination. For example, G841 is a dark blue made by Great American Market (GAM), and R02 is a light amber made by Rosco and L216 is a diffusion filter made by Lee Filters.

Manufacturers produce swatch books, which contain a small piece of each color available, adjacent to its color code, to simplify ordering. Swatch books enable designers and technicians to have a true representation of the manufacturers' range of color.

Most designers choose a limited color palette for generic applications because it is financially and logistically difficult to have access to all colors for a single show.

Color correction gels absorb light of some wavelengths more than others. This Rosco gel has a low transmittance at long wavelengths.

Most ranges of gels also include non-colored media, such as a variety of diffusion and directional "silk" materials to produce special lighting effects. "Opal" for example is an opalescent or translucent diffusion filter.

It is common for a gel manufacturer to publish the transmission coefficient or even the spectral transmittance curve in the swatch book and catalogs. A low transmittance gel will produce relatively little light on stage, but will cast a much more vivid color than a high transmission gel, because the colorfulness of a light source is directly related to narrowness of its spectral linewidth. Conversely, the flatter its curve becomes, the closer the gel is to a neutral density filter.