The Copyright Act 1911, also known as the Imperial Copyright Act of 1911, is an Act of the Parliament of the United Kingdom (UK) which received Royal Assent on 16 December 1911.[1] The act established copyright law in the UK and the British Empire. The act amended existing UK copyright law, as recommended by a Royal Commission in 1878[2] and repealed all previous copyright legislation that had been in force in the UK.[3] The act also implemented changes arising from the first revision of the Berne Convention for the Protection of Literary and Artistic Works in 1908.[4]

The act came into force in the UK on 1 July 1912, in the Channel Islands (except Jersey) on 1 July 1912, in Jersey on 8 March 1913, and in the Isle of Man on 5 July 1912. The Copyright Act 1911 applied or extended to all parts of the British Empire. In India the act came into force on 30 October 1912, in Papua on 1 February 1931, and all other British possessions on 1 July 1912. It was subsequently enacted on various dates in the self-governing dominions and "territories under protection" of the British Empire.[5] In Israel the Copyright Act 1911, as amended, remained the governing statute until the 2007 Copyright Act took effect in May 2008.[6]

In the two centuries after the Statute of Anne of 1709, which afforded copyright protection to books, other works were afforded copyright protection either through case law, as in the case of music, or through Acts of Parliament, as in the case of engravings, paintings, drawings and photographs,[7] in legislation such as the Engraving Copyright Act 1734 and the Fine Arts Copyright Act 1862.[8]

The 1911 Act abolished the need for registration at the Stationers' Hall and provided that copyright is established upon the creation of a work. However, as the 1911 Act come into effect at different times in different countries of the Commonwealth, registration at Stationers' Hall continued to be required in some Commonwealth countries after 1911.[10] The Act also stated that copyright arose in the act of creation, not the act of publishing.[11]

The scope of copyright was further widened and producers of sound recordings were granted the exclusive right to prevent other reproducing their recordings, or playing them in public. The act provided that the copyright in literary, dramatic and music works could be infringed by the making of a film or other mechanical performance incorporating the copyrighted works.[12]

British lawyer Evan James Macgillivray summarised the changes in the introduction of his annotated edition of the 1911 Act as follows[2]: 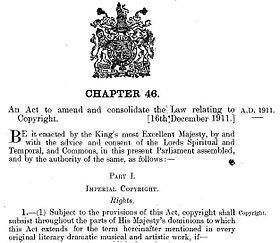 Cover page of the British Copyright Act 1911, also known as the Imperial Copyright Act of 1911. "Part I Imperial Copyright. Rights. 1.(1) Subject to the provisions of this Act, copyright shall subsist throughout the parts of His Majesty’s dominions to which this Act extends for the term hereinafter mentioned in every original literary dramatic music and artists work, if..."

Influence of the act

The Copyright Act 1911 provided the template for an approach to copyright exceptions where a specific list of exceptions carefully defines permitted uses of the copyrighted work. The 1911 Act formed the basis of UK copyright law and, as an imperial measure, formed the basis for copyright law in most of what were then British colonies and dominions. While many of these countries have had their own copyright law for a considerable number of years, most have followed the imperial model developed in 1911. Australia, Canada, India, New Zealand, Singapore and South Africa define the limits on and exceptions to copyright by providing an exhaustive list of specifically defined exceptions.[15]

This "Commonwealth approach" to copyright is in contrast with that adopted in US copyright law. US copyright does contain a number of specific exceptions, as well as providing for a fair use defence in section 107 of the Copyright Act 1976. The Section provides a list of illustrative example of uses under this defence, such as criticism, comment and research. In contrast to the Commonwealth fair dealing exceptions, the fair use defence allows US courts to find that a defendant's use is fair and hence not an infringement of copyright, even though the use does not fall within the statutory list provided for in Section 107.[16]