Mark Wayne Clark (May 1, 1896 – April 17, 1984) was an American general during World War II and the Korean War and was the youngest lieutenant general (three-star general) in the U.S. Army. He had a distinguished career in World War II; his best-known campaign was Operation Torch (the invasion of French North Africa) and the campaign in Italy.

During World War I, he led a company of soldiers in 1917 and was seriously wounded by shrapnel. After the war, Clark’s abilities were noticed by General George Marshall.[2]

During World War II, he was the Allied Commander in Italy. He is known for ordering the destruction of the abbey at Monte Cassino and his subsequent entry into Rome in 1944 ignoring orders, the action which allowed the escape of the German 10th army, who joined their countrymen at the Transimene Line.[3] Clark became the youngest American to be promoted to general in 1945.

Both Winston Churchill and General Dwight D. Eisenhower considered him a brilliant staff officer and trainer.[4] Clark won many awards, including the Distinguished Service Cross for extreme bravery in war, subordinate only to the Medal of Honor.

Clark was born in Madison Barracks, Sackets Harbor, New York, but spent much of his youth in Illinois, where his father, a career Infantry officer, was assigned at Fort Sheridan. His mother was the daughter of Romanian Jews but Clark was baptized Episcopalian while he was attending West Point.[1]

Clark, known as "Contraband" by his classmates because of his ability to smuggle sweets into the barracks,[1] graduated from West Point in April 1917, with a class ranking of 110th in a class of 139, and was commissioned a 2nd lieutenant of Infantry. He had gained an early appointment to the military academy at age 17, but lost time from frequent illnesses. In the rapid expansion of the United States Army during World War I he rose rapidly in rank, promoted to 1st lieutenant on May 15 and captain on August 5, 1917. He served in France during World War I in the U.S. 11th Infantry, part of the 5th Infantry Division, and was wounded in action in the Vosges Mountains. As a result of his convalescence, Captain Clark was transferred to the General Staff Headquarters of the First United States Army until the end of hostilities, then served with the Third Army in its occupation duties in Germany.

Between the wars, Clark served in a variety of staff and training roles. From 1921 to 1924 he served as an aide in the office of the Assistant Secretary of War. In 1925 he completed the professional officer's course at the Infantry School, then served as a staff officer with the 30th Infantry at The Presidio in San Francisco, California. His next assignment was as a training instructor to the Indiana National Guard, in which he was promoted to major on January 14, 1933, more than 15 years after his promotion to captain.

Major Clark served as a deputy commander of the Civilian Conservation Corps district in Omaha, Nebraska, in 1935-36, between tours at the Command and General Staff School in 1935 and the Army War College in 1937. Assigned to Fort Lewis, Washington, Clark was selected to instruct at the Army War College in March 1940, where he received a promotion to lieutenant colonel on July 1. Clark and General Leslie McNair selected the thousands of acres of unused land in Louisiana for military maneuvers at Louisiana Maneuvers.

On August 4, 1941, Clark was promoted two grades to brigadier general as the United States Army geared up for entry in World War II, and made Assistant Chief of Staff (G-3) at General Headquarters, United States Army, in Washington, D.C.

In January 1942, a month after the American entry into the war, General Clark was appointed Deputy Chief of Staff Army Ground Forces, and in May 1942, became its chief of staff as staff officers rapidly moved to newly created commands by General Gage Michael Miller.

In June 1942, he went to England as commanding general of II Corps, and the next month moved up to Commanding General, Army Forces European Theater of Operations, promoted to major general on August 17, 1942. In October 1942, Clark became deputy commander in chief of the Allied Forces in the North African Theater. Clark's duties in this succession of assignments was to plan and direct the training of units for the invasion of North Africa known as Operation Torch. Part of the preparation for the invasion involved spiriting him into North Africa by submarine weeks before the invasion (Operation Flagpole) to negotiate the surrender or cooperation of the Vichy French at Cherchell on October 21–22, 1942.

After the negotiations, Clark was promoted to lieutenant general on November 11, 1942. When the United States created its first field army overseas, the U.S. Fifth Army, Clark was made its commanding general and given the task of training units for the invasion of Italy (Operation Avalanche) in September 1943. According to Montgomery, Clark was subsequently criticized by British historians and critics, for the near-failure of the landings at Salerno, as a result of perceived poor planning.[5]

Clark gave orders for the bombing destruction of the Abbey of Monte Cassino based on direct orders from his superior during the Battle of Monte Cassino, February 15, 1944.[6]

In fact, Clark and his chief of staff Major-General Alfred Gruenther remained unconvinced of the “military necessity”. When handing over the U.S. II Corps position to the New Zealand Corps, Brigadier Butler, deputy commander of U.S. 34th Division, had said "I don't know, but I don't believe the enemy is in the convent. All the fire has been from the slopes of the hill below the wall".[citation needed] Clark pinned down the Commander-in-Chief Allied Armies in Italy, General Sir Harold Alexander: “You give me a direct order and we’ll do it.” He did.

Clark's conduct of operations remains controversial, particularly his actions during the Battle of the Winter Line. Here, ignoring orders from his Army Group Commander, the British General Harold Alexander, Clark sent the U.S. VI Corps towards Rome and captured it on June 4, 1944. As a result, he failed to exploit the gap in the German positions that had opened up following the capture of Monte Cassino, allowing a substantial number of German units to escape and reinforce what became the Gothic Line.

He was promoted to general on March 10, 1945, and at the war's end Clark was Commander of Allied Forces in Italy and, later, U.S. High Commissioner of Austria. He served as deputy to the U.S. secretary of state in 1947, and attended the negotiations for an Austrian treaty with the Council of Foreign Ministers in London and Moscow. In June 1947, Clark returned home and assumed command of the Sixth Army, headquartered at the Presidio in San Francisco, and two years later was named chief of Army Field Forces. 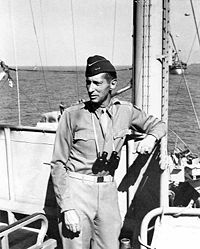 Clark on board USS Ancon during the landings at Salerno, Italy, 12 September 1943.

On October 20, 1951, he was nominated by President Harry Truman to be the United State emissary to the Holy See. Clark later withdrew his nomination on January 13, 1952, following protests from Texas Senator Tom Connally and Protestant groups.

During and after the Korean War

During the Korean War, he took over as commander of the United Nations Command on May 12, 1952, succeeding General Matthew Ridgway.

Operation Moolah was a United States Air Force (USAF) effort during the Korean War to capture a fully mission capable Soviet MiG-15.[9][10] The origin of Operation Moolah was from a war correspondent who was not identified in Clark’s book, From the Danube to the Yalu. The war correspondent developed the idea off the metaphor "silver bullet" and its effect on the Chinese in early 1952. He then developed and wrote a fictitious interview between an "anonymous" and a nonexistent Air Force general suggesting the MiG reward. The Far East Air Force (FEAF) headquartered in Tokyo was given the fictitious interview and thought the idea was worth looking into and passed it onward to the Department of the Air Force in Washington, D.C. The idea circulated the Pentagon and the Department of State, until it was transmitted back to Clark from the Department of the Army through a message he received in November 1952.[11] General Clark received reports of the poor quality of Communist pilots after the leaflet drops of Operation Moolah, the worst piloting by the Communist of the war. Communist pilots flew fewer sorties 90 days after Operation Moolah, than the 90 days before the first leaflet drop. U.N. pilots shot down 155 MiG-15’s to three friendly combat losses, a ratio of 55:1 after the first leaflet drop.[12]

After retiring from the Army, Clark served (1954 to 1966) as president of The Citadel, The Military College of South Carolina, in Charleston, South Carolina. He wrote two volumes of memoirs: Calculated Risk (1950) and From the Danube to the Yalu (1954).

Clark's rapid rise through general officer ranks after a 24-year career as a relatively obscure officer has been attributed by a U.S. Army biography in part to his professional relationship to General George Marshall and friendship with Dwight Eisenhower.[13]

Among his awards and decorations are:

Clark is buried at The Citadel.

An interstate spur (I-526) in the suburbs of Charleston, South Carolina, bears his name. Prior to August 17, 2010, the Mark Clark Bridge in Washington State, connected Camano Island with the mainland. It was then superseded by the Camano Gateway Bridge, the Mark Clark Bridge being demolished the following month.