Order of Saints Maurice and Lazarus

Order of Saints Maurice and Lazarus
For the US National Infantry Association award, see Order of Saint Maurice.

The Order of Saints Maurice and Lazarus is an order of chivalry awarded by the House of Savoy, the heads of which were formerly Kings of Italy. The order was formed by a union of the original Order of St Lazarus and the Order of Saint Maurice in 1572 and has around 2,000 members.

History of the order

The Order of Saint Lazarus was established as a military and religious community at the time of the Latin Kingdom of Jerusalem, probably some years before 1090. Presuming a foundation date of 1099 for the Order of the Hospital (now the Sovereign Military Order of Malta), the Order of Saint Lazarus is arguably the oldest surviving of the medieval military-religious knightly orders. From its inception, the order was concerned with the relief of leprosy, and many of its members were lepers who had been knights in other orders. It became very rich, its practices dubious, and its funds much abused. With the fall of Acre in 1291 the knights of St Lazarus fled the Holy Land and Egypt and settled in France and, in 1311, in Naples. In the sixteenth century, the order declined in credibility and wealth. With papal support, Duke of Savoy became Grand Master in 1572.

The Order of St Maurice was founded in 1434 by Amadeus VIII, Duke of Savoy, who became Antipope Felix V. The order declined, but in 1572 was reestablished by Pope Pius V at the instigation on the then Duke of Savoy.

After Italy became a republic in 1946 the order was effectively replaced by the Order of Merit of the Italian Republic. Since 1951 it has not been recognised officially by the Italian state. The House of Savoy in exile continued to bestow the order. Today it is granted to persons eminent in the public service, science, art, letters, trade, and charitable works. While the continued use of those decorations conferred prior to 1951 is permitted in Italy, the crowns on the ribbons issued before 1946 must be substituted for as many five pointed stars on military uniforms.[1]

The generally-accepted Grand Master of the Order is Vittorio Emanuele, Prince of Naples, the current head of the House of Savoy. Some of Vittorio Emanule's policies as Grand Master have generated controversy. All three of his sisters have resigned from their positions as dames of the order. Princess Maria Gabriella of Savoy has criticised her brother for instituting "the payment of membership fees [and] activities such as the sale of objects with the Savoy coat of arms and credit cards of the order"[2] In 2006, Vittorio Emanuele's cousin, Amedeo of Aosta, declared himself Head of the Savoy dynasty and thus Grand Master de jure. For this reason the grand magistry is now contested. 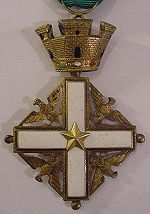 The former badge of an Officer of the Order of Merit of the Italian Republic, used from 1951 to 2001.

The Order currently has six classes for gentlemen:

as well as three classes for ladies:

Eventually, it became a requirement for a person to have already received the Order of Saints Maurice and Lazarus before receiving the Order of the Most Holy Annunciation.

The formerly related Maurizian Medal for Military Merit of fifty years, established in 1839, was one of the few medals not suppressed by the Republic, becoming the Maurizian Medal of Merit for fifty years military career in 1954.[3]

See also Category:Recipients of the Order of Saints Maurice and Lazarus