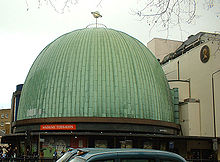 Madame Tussauds and the London Planetarium

Madame Tussauds (UK /təˈsɔːdz/, US /tʉˈsoʊz/; the family themselves pronounce it /ˈtuːsoʊ/[1]) is a wax museum in London with branches in a number of major cities. It was founded by wax sculptor Marie Tussaud and was formerly known as "Madame Tussaud's", but the apostrophe is no longer used[2][3] (though it still appears in some signage at the New York location).[4] Madame Tussauds is a major tourist attraction in London, displaying waxworks of historical and royal figures, film stars, sports stars and famous murderers.

Marie Tussaud, was born Anna Maria Grosholtz (1761–1850) in Strasbourg, France. Her mother worked as a housekeeper for Dr. Philippe Curtius in Bern, Switzerland, who was a physician skilled in wax modelling. Curtius taught Tussaud the art of wax modelling.

Tussaud created her first wax figure, of Voltaire, in 1777.[5] Other famous people she modelled at that time include Jean-Jacques Rousseau and Benjamin Franklin. During the French Revolution she modelled many prominent victims. In her memoirs she claims that she would search through corpses to find the decapitated heads of executed citizens, from which she would make death masks. Her death masks were held up as revolutionary flags and paraded through the streets of Paris. Following the doctor's death in 1794, she inherited his vast collection of wax models and spent the next 33 years travelling around Europe. Her marriage to François Tussaud in 1795 lent a new name to the show: Madame Tussaud's. In 1802, she went to London having accepted an invitation from Paul Philidor, a magic lantern and phantasmagoria pioneer, to exhibit her work alongside his show at the Lyceum Theatre, London. She did not fare particularly well financially, with Philidor taking half of her profits. As a result of the Franco-British war, she was unable to return to France, so she travelled throughout Great Britain and Ireland exhibiting her collection. From 1831 she took a series of short leases on the upper floor of "Baker Street Bazaar" (on the west side of Baker Street between Dorset Street and King Street),[6] which later featured in the Druce-Portland case sequence of trials of 1898-1907. This became Tussaud's first permanent home in 1836.[7]

By 1835 Marie had settled down in Baker Street, London, and opened a museum.

One of the main attractions of her museum was the Chamber of Horrors. This part of the exhibition included victims of the French Revolution and newly created figures of murderers and other criminals. The name is often credited to a contributor to Punch in 1845, but Marie appears to have originated it herself, using it in advertising as early as 1843.[8]

Other famous people were added to the exhibition, including Horatio Nelson, and Sir Walter Scott. Some of the sculptures done by Marie Tussaud herself still exist. The gallery originally contained some 400 different figures, but fire damage in 1925, coupled with German bombs in 1941, has rendered most of these older models defunct. The casts themselves have survived (allowing the historical waxworks to be remade), and these can be seen in the museum's history exhibit. The oldest figure on display is that of Madame du Barry. Other ancient faces from the time of Tussaud include Robespierre, George III and Benjamin Franklin. In 1842, she made a self portrait which is now on display at the entrance of her museum. She died in her sleep on 15 April 1850.

By 1883 the restricted space and rising cost of the Baker Street site prompted her grandson (Joseph Randall) to commission the building at its current location on Marylebone Road. The new exhibition galleries were opened on 14 July 1884 and were a great success.[9] However, the building costs, falling so soon after buying out his cousin Louisa's half share in the business in 1881, meant the business was under-funded. A limited company was formed in 1888 to attract fresh capital but had to be dissolved after disagreements between the family shareholders, and in February 1889 Tussaud's was sold to a group of businessmen led by Edwin Josiah Poyser.[10] Edward White, an artist dismissed by the new owners to save money, allegedly sent a parcel bomb to John Theodore Tussaud in June 1889 in revenge.[11] 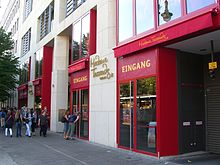 Entry of Madame Tussauds in Berlin 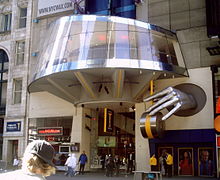 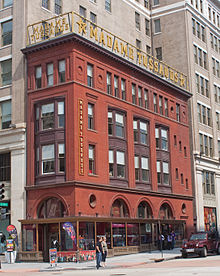 Madame Tussaud's wax museum has now grown to become a major tourist attraction in London, incorporating (until 2010) the London Planetarium in its west wing. It has expanded and will expand with branches in Amsterdam, Bangkok, Berlin, Blackpool, Dubai, Hamburg, Hollywood, Hong Kong, Hot Springs, AR, Las Vegas, Manchester, Moscow, New York City, Shanghai, Vienna and Washington, D.C. Today's wax figures at Tussauds include historical and royal figures, film stars, sports stars and famous murderers. Known as "Madame Tussauds" museums (no apostrophe), they are owned by a leisure company called Merlin Entertainments, following the acquisition of The Tussauds Group in May 2007. In 2010, Merlin Entertainments's partnership with Tatweer will make a Madame Tussauds in Dubai.

In July 2008, Madame Tussauds' Berlin branch became embroiled in controversy when a 41-year-old German man brushed past two guards and decapitated a wax figure depicting Adolf Hitler. This was believed to be an act of protest against showing the ruthless dictator alongside sports heroes, movie stars, and other historical figures. However, the statue has since been repaired and the perpetrator has admitted he attacked the statue to win a bet.[12] The original model of Hitler, unveiled in Madame Tussauds London in April 1933 was frequently vandalised and a replacement in 1936 had to be carefully guarded.[13][14]

The amateur tenor, whose vocal villainies
All desire to shirk,
Shall, during off-hours
Exhibit his powers
To Madame Tussaud's waxwork.