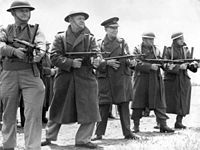 The Owen Gun, which was known officially as the Owen Machine Carbine, was an Australian submachine gun designed by Evelyn (Evo) Owen in 1939. The Owen was the only Australian-designed and main service submachine gun of World War II and used by the Australian Army from 1943 until the mid 1960's.

Owen, an inventor from Wollongong, was 24 in July 1939 when he demonstrated his prototype .22 calibre "Machine Carbine" to Australian Army ordnance officers at Victoria Barracks in Sydney. The gun was rejected because the army, at the time, did not recognize the value of submachine guns. Following the outbreak of war, Owen joined the Australian Army as a private.

In September 1940, the manager of Lysaght’s Works at Port Kembla Vincent Wardell discovered a machine gun in a sugar bag next to his garage when he returned home from work. He showed it to his neighbour, Evelyn’s father who “exploded” at his son’s carelessness and explained the story so far. Wardell became intrigued by the weapon's simplicity and arranged to have Owen transferred to the Army Inventions Board, where he re-commenced work on the gun. The army continued to view the weapon in a negative light, but the government took an increasingly favourable view.

The choice of caliber took some time to be settled. As large quantities of .45 ACP cartridges were available, it was decided to adopt it for the Owen Gun. Official trials were organized, and Lysaght made three versions in 9 mm, .38-200 and .45 ACP. Sten and Thompson submachine guns were used as benchmarks. As part of the testing, all of the guns were immersed in mud and covered with sand to simulate the harshest environments in which they would be used. The Owen was the only gun that still operated after the treatment. Although the test showed the Owen's capability, the army could not decide on a calibre, and it was only after intervention from the higher levels of government that the army ordered the 9 mm variant. This was very important to the Australian Army.

During the gun's life, its reliability earned it the nickname "Digger's Darling" by Australian troops and it was rumoured to be highly favoured by US troops.

The Owen went into production at the John Lysaght factories at Port Kembla and Newcastle. Between March 1942 and February 1943, Lysaght produced 28,000 Owen Guns. However, the initial batch of ammunition turned out to be the wrong type and 10,000 of the guns could not be supplied with ammunition. Once again the government overrode military bureaucracy, and took the ammunition through the final production stages and into the hands of Australian troops, at that time fighting Japanese forces in New Guinea. Approximately 50,000 Owens were produced from 1941 to 1945. 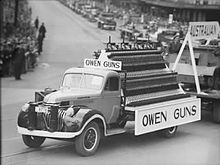 Although it was somewhat bulky, the Owen became very popular with soldiers because of its reliability. It was so successful that it was also ordered by the United States[citation needed] and New Zealand.

The Owen was later used by Australian troops in the Korean and Vietnam Wars,[1] particularly the scouts in infantry sections. It remained a standard weapon of the Australian Army until the mid-1960s, when it was replaced by the F1 submachine gun. It was also used in Malaya by British troops, the gun was among their favourites for jungle fighting.

The Owen has a simple blowback design, firing from an open bolt. It was designed to be fired either from the shoulder or the hip. It is easily recognisable, owing to its unconventional appearance, including the top-mounted magazine, and the side-mounted sight required to allow the firer to aim past it. The placement of the magazine allows gravity to assist the magazine spring in pushing cartridges down to the breech, which improves feeding reliability. Another unusual feature is the separate compartment inside the receiver, which isolates the small-diameter bolt from its retracting handle by means of a small bulkhead. This prevents dirt and mud from jamming the bolt, and makes the Owen a highly reliable weapon. Like the Sten, the Owen had a non-folding wire buttstock, but also had pistol grips.

To facilitate cleaning, the ejector is built into the magazine, rather than the body of the gun. This allows the barrel to be removed rapidly, by pulling up a spring-loaded plunger in front of the magazine housing. After removing the barrel, the bolt and return spring are removed in a forward direction, completely dismantling the gun.

Photographic evidence indicates a horseshoe-shaped 72-round magazine was fielded, but little information exists as to the specifics of this variant.[2][3]

In 2004, an "underground weapons factory" was seized in Melbourne, Australia, yielding among other things a number of silenced copies of the Owen submachine gun with magazines instead inserted underneath rather than overhead, suspected to have been built for sale to local gangs involved in the illegal drug trade.[4]