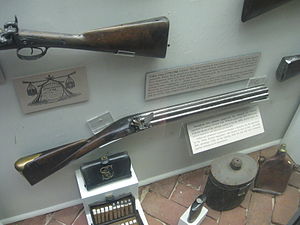 The Nock gun was a seven-barrelled flintlock smoothbore firearm used by the Royal Navy during the early stages of the Napoleonic Wars. A volley gun originally designed for ship-to-ship fighting, its use was limited and eventually discontinued because the powerful recoil limited its use.

Since then, it has gained some historical fame for its bizarre appearance, notably in The Alamo and the Richard Sharpe series of novels by Bernard Cornwell.

The weapon was invented by British engineer James Wilson in 1779, and named after Nock, the London-based armaments manufacturer contracted to build the gun. It was intended to be fired from the rigging of Royal Navy warships onto the deck in the event that the ship was boarded by enemy sailors. Theoretically, the simultaneous discharge of seven barrels would have devastating effect on the tightly packed groups of enemy sailors.

The volley gun consisted of seven barrels welded together, with small vents drilled through from the central barrel to the other six barrels clustered around it. The central barrel screwed on to a hollow spigot which formed the chamber and was connected to the vent.

The gun operated using a standard flintlock mechanism, with the priming gunpowder igniting the central charge via a small vent. When the flash reached the central chamber, all seven charges ignited at once, firing more or less simultaneously.

The first models featured rifled barrels, but this made loading a long and cumbersome process, resulting in all following models being manufactured with smoothbore barrels.

During the early stages of the Napoleonic Wars, 635 Nock guns were purchased by the Royal Navy. However, attempts to use the gun during combat quickly revealed design flaws. The recoil caused by all seven barrels firing at once was more powerful than had been thought, and frequently injured the shoulder of whoever was firing the gun, and in any case made the gun very difficult to aim and control. Furthermore, officers were reluctant to issue the guns during battle out of fear that the flying sparks would set fire to the surrounding rigging and sails.

A smaller, lighter version was produced, which shortened the gun's range, but the recoil was still too powerful for sailors to feel comfortable using it. The few models purchased by the Royal Navy were removed from service in 1804.

Examples are available for viewing in the weapons gallery at York Castle Museum, the Hollywood Guns exhibit at the National Firearms Museum and The Charleston Museum (SC).[citation needed]

The Nock gun was brought to modern attention due to its appearance in the film The Alamo in which one is used by Richard Widmark playing Jim Bowie and also in Bernard Cornwell's Sharpe series, in which the character Patrick Harper (a strong, burly man) wields an ex-Navy Nock gun.[1]

In the video game Gun, the main antagonist, Thomas Magruder, uses a Nock Gun during the final boss battle of the game. The gun itself is unlockable as a secret weapon, and can be used by the player once Magruder has been defeated.