The COP 357 is a 4 shot Derringer type pistol chambered for the powerful .357 Magnum round. It was designed by Robert Hillberg, based on his earlier work on the Hillberg Insurgency Weapon.

The double action weapon is only slightly larger than the typical .25 automatic pistol pistol, which made it a good choice for a defensive weapon or a police backup gun.

Construction and operation of the COP 357 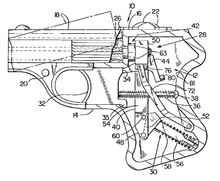 Drawing from US patent 4,407,085, covering the COP Derringer operating mechanism

The C.O.P. 357 is quite robust in design and construction. It is made of solid stainless steel components. Cartridges are loaded into the four separate chambers by sliding a latch that "pops-up" the barrel for loading purposes, similar to top-break shotguns. Each of the four chambers has its own dedicated firing pin. It uses an internal hammer, which is activated by depressing the trigger to hit a ratcheting/rotating striker that in turn strikes one firing pin at a time. Older "pepperboxes" also used multiple barrels, but the barrels were the part that rotated. The COP 357 is unique in that it uses the ratcheting/rotating striker, which is completely internal, to fire each chamber in sequence.

Two frequent complaints about the COP 357 are that it is too heavy to be used as a backup gun, and that the trigger pull is too heavy for rapid fire—even heavier than most modern revolvers.

The weapon appears in both Blade Runner (used by Leon to shoot the detective in the opening scene) and The Matrix Reloaded (used by Persephone to kill one of her husband the Merovingian's thugs).