Nicholas Thompson "Nick" Swisher (born November 25, 1980) is an outfielder for the New York Yankees. Swisher is a switch hitter who throws left-handed.

He is the son of former major league catcher Steve Swisher, who played for various National League baseball clubs in the 1970s and 1980s. Swisher was born in Columbus, Ohio, but grew up in Parkersburg, West Virginia. Prior to his career in the Major Leagues, Swisher played his collegiate ball for the Ohio State Buckeyes.

Nick Swisher is the son of Steve Swisher, a former major leaguer of German descent, and an Italian mother Rebecca. Swisher's parents divorced when he was 11 years old. He then went to live with his grandparents, who cared for him throughout his teenage years. He has said many times that his grandmother was the closest person to him and because of her, he has a great life and career in baseball. Swisher honors his grandparents, who have passed away, by looking up at the sky before every single pitch.

Swisher was a two-sport star at Parkersburg High School in football and baseball as well as a letterman in basketball. As a strong safety he was recruited by several Division I-A colleges, including Notre Dame,[1] but chose to pursue baseball. Because he was not selected in the Major League Baseball Draft out of high school, he went to college and signed with Ohio State University, as that school and Ohio University were the only colleges to recruit him for baseball.[2] He was named Big 10 Freshman of the Year in 2000, after hitting .299 with 10 home runs and 48 RBIs. He was an All-Big 10 selection at first base as a sophomore in 2001, after hitting .322 with 56 RBIs and a league-leading 15 home runs. He earned All-Big 10 honors in the outfield in 2002, after batting .348 with 10 home runs and 52 RBIs. Swisher was selected by the A's with the Boston Red Sox first round pick in 2002 as compensation for the loss of free agent Johnny Damon.

Swisher, and the A's 2002 draft, are heavily featured in Michael Lewis' 2003 book Moneyball. In a book whose key theme is the gulf between orthodox baseball thinking and the new sabermetric influenced system being implemented by Billy Beane, Swisher was notable as one of the few examples of a player who traditional scouts and Beane could agree upon.[3]

Prior to moving up to the big leagues, Swisher played for the Visalia Oaks, Vancouver Canadians, Modesto A's, Midland RockHounds, and Sacramento River Cats--all Oakland farm teams.[4] In 2005, he led the minor leagues with 102 walks.[5] 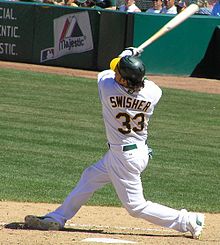 Swisher batting for the Athletics in 2005.

Swisher played in only 20 games during the 2004 season, and consequently was still considered to be in his rookie year in 2005. He finished 6th in the American League Rookie of the Year voting. His teammates Huston Street and Joe Blanton finished 1st and 7th, respectively.[6]

Following his rookie season, Swisher improved in most offensive categories. During the 2006 regular season, Swisher compiled a .254 batting average with 35 home runs. He also improved his on base percentage by raising it to .372, as well as boosting his slugging percentage to .493. Swisher finished second for the team in on base plus slugging behind the veteran slugger Frank Thomas. Swisher spent about half of his playing time in left field, and the other half at first base. The Oakland A's lacked both Dan Johnson and Erubiel Durazo for a large portion of the 2006 season, leaving room for Swisher to move back into his preferred position on a temporary basis.[7] During the season, Swisher had a column for ESPN.com about his various baseball experiences called Sophomore Year. This included multiple articles that pertained to his early MLB playing experiences, as well as the MLB Draft of 2002.[8]

Swisher has also exemplified a good amount of durability in contrast to his teammates who have spent a large portion of time on the disabled list.

On September 16, Swisher initiated a brawl when he charged the mound after getting hit by a pitch from Texas Rangers pitcher Vicente Padilla. Earlier in the plate appearance, Padilla (who had hit Swisher the prior year) threw two inside pitches with the apparent intention of hitting Swisher. Both players were ejected following the brawl.

Swisher as a White Sox player.

Swisher was traded on January 3, 2008 to the Chicago White Sox for minor leaguers Ryan Sweeney, Gio Gonzalez, and Fautino De Los Santos as part of what Athletics general manager Billy Beane termed a "rebuilding effort".[9] While Swisher quickly established himself as a fan favorite on his new team he struggled offensively, batting just .219 through the season (the lowest batting average in the majors), though he improved his home run total from 22 in 2007 to 24 in 2008.[10][11] He also led the majors in pitches per plate appearance, with 4.51.[12] Because of his poor offensive play White Sox manager Ozzie Guillen benched Swisher for most of September, saying publicly that "I have to put the best lineup out there to win the game ... To me, the best lineup right now is without (Swisher)."[13]

Swisher batting in 2009, his first year with the Yankees

On November 13, 2008, Swisher and minor league pitcher Kanekoa Texeira were traded to the New York Yankees for utility man Wilson Betemit and minor league pitchers Jeffrey Marquez and Jhonny Núñez.[14] Swisher was acquired to be the Yankees starting first baseman. However, the Yankees signed Mark Teixiera later in the offseason, who took the starting role.[15] At the end of spring training, manager Joe Girardi announced that Xavier Nady would be starting in right field while Swisher would be a bench player.[16][17] Due to the perceived logjam, many teams reportedly pursued Swisher,[18][19] but the Yankees opted to keep him as a reserve outfielder and first baseman.

On April 9, 2009 against the Baltimore Orioles, Swisher was started for the first time as a Yankee in right field, replacing Xavier Nady who was playing DH to give Hideki Matsui a rest. Swisher capitalized on this opportunity and had a great game, going 3 for 5 with a home run and tying his career high of five RBIs. Just five days later, Nady suffered a season ending elbow injury – allowing Swisher to become the regular starter for the Yankees in right field.[20]

On April 13, 2009, in a game against the Tampa Bay Rays, Swisher pitched one inning in relief, allowing one hit and one walk before retiring the next three batters in a row, including a strikeout against Gabe Kapler in his first pitching appearance in the major leagues.[21] He was the first Yankee position player to pitch since Wade Boggs in 1997 and the first Yankee to homer and pitch in the same game since Lindy McDaniel did it in Detroit on September 28, 1972.[22]

Due to a .128 batting average in the 2009 postseason, Swisher worked with hitting coach Kevin Long to reinvent his swing for the 2010 season.[23] Swisher was a contestant in the 2010 All-Star Final Vote from July 4 to July 8. Swisher lobbied for the post with a promotion commercial of him with a surf board to indicate that he would be surfing in Southern California since the game was to be hosted by the Los Angeles Angels of Anaheim. In what was to that date the closest vote in Final Vote history, he won the final place on the AL roster ahead of Red Sox first baseman Kevin Youkilis.[24] Additionally, Swisher participated in the Home Run Derby.[25] Swisher finished the season with a career-high .288 batting average and 29 home runs.[26]

During the Bleacher Creatures' roll call at the top of the first inning, Swisher is known to come to attention and salute the bleachers.

Swisher is known for his outgoing personality.

Swisher was very close to his paternal grandmother, Betty Lorraine Swisher, who raised him after his parents' divorce and died from brain cancer in 2005; he has her initials tattooed on his chest surrounded by angel's wings and a halo. To honor her further, he let his hair grow for eleven months and donated it to Pantene Beautiful Lengths, a program that creates free wigs for cancer patients. On May 19, 2007, he cut his hair with assistance from his father.[27] His website, nickswisher.net, is also dedicated to his grandmother.[28] He is well known for touching his lips and pointing to the sky in her honor after he gets a hit as well as inking her initials on the bottom of his bats' knobs and kissing the letters when he comes to home plate. Also, while at bat, he looks into the sky before every pitch he receives in tribute to his grandparents. After his grandfather Don died in November 2008, Swisher began adding his initials to his bats as well. When Nick is up at bat, he looks up to the sky to honor his parents and grandparents. He is known by his loyal fans as the "Swish Dog". He later stated that he planned on getting another tattoo on his back in the same style as his existing one after the 2009 season to honor his grandfather.[29]

In 2011 Swisher guest starred as himself on two episodes of his wife Joanna Garcia's sitcom Better with You. The first episode aired February 16 and the second aired February 23.[33] He also appeared on the February 1, 2010 episode of How I Met Your Mother.[34]

Swisher is releasing a kids music album titled "Believe" on August 9, 2011. A percentage of the proceeds will be donated to "Swish's Wishes", a charity started by Swisher for children who are facing health crises. The twelve song album features guest appearances from former New York Yankees outfielder Bernie Williams and current San Francisco Giants pitcher Barry Zito. All of the songs recorded on the album are cover songs that were selected by Swisher.[35]

The album peaked at #3 on the chart of iTunes Children's Albums.[36]