A corrosion inhibitor is a chemical compound that, when added to a liquid or gas, decreases the corrosion rate of a material, typically a metal or an alloy.[1] The effectiveness of a corrosion inhibitor depends on fluid composition, quantity of water, and flow regime. A common mechanism for inhibiting corrosion involves formation of a coating, often a passivation layer, which prevents access of the corrosive substance to the metal. Permanent treatments such as chrome-plating are not generally considered inhibitors, however. Instead corrosion inhibitors are additives to the fluids that surround the metal or related object.

Corrosion inhibitors and their role

In this example, hydrazine converts oxygen, a common corrosive agent, to water, which is generally benign. Related inhibitors of oxygen corrosion are hexamine, phenylenediamine, and dimethylethanolamine, and their derivatives. Antioxidants such as sulfite and ascorbic acid are sometimes used. Some corrosion inhibitors form a passivating coating on the surface by chemisorption. Benzotriazole is one such species used to protect copper. For lubrication, zinc dithiophosphates are common - they deposit sulfide on surfaces. 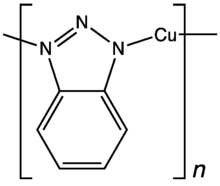 Benzotriazole inhibits corrosion of copper by forming an inert layer of this polymer on the metal's surface.

The suitability of any given chemical for a task in hand depends on many factors, including their operating temperature.

Corrosion inhibitors are commonly added to coolants, fuels, hydraulic fluids, boiler water, engine oil, and many other fluids used in industry. For fuels, various corrosion inhibitors can be used. Some components include zinc dithiophosphates.[3]