OOCL is one of the world's largest shipping and logistics companies with more than 280 offices in 55 countries around the world, providing 78 services covering international trading markets with a fleet of more than 270 ships, including Grand Alliance member line vessels, feeder and OOCL-owned and operated vessels. OOCL has vessels of different classes with capacity varying from 2,500 Twenty-foot equivalent units (TEU) to 8,063 TEU, and ice-class vessels for extreme weather conditions.

The Grand Alliance[1] was formed in 1998. Its members are Hapag-Lloyd (Germany), NYK (Japan) and OOCL (Hong Kong). 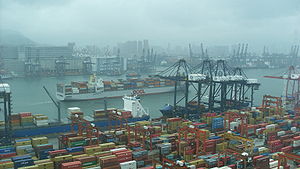 OOCL claims its mission statement to be the best and most innovative international container transport and logistics service provider; providing a Vital Link to world trade and creating value for customers, employees, shareholders and partners..

OOCL offers around 78 weekly services around the world. Linking Asia, Europe, North America, the Mediterranean, the Indian sub-continent, the Middle East and Australia/New Zealand, the company offers transportation services to all major east/west trading economies of the world. OOCL is one of the leading international carriers serving China, providing a full range of logistics and transportation services throughout the country.

Starting from 1993, after six years of research, the group succeeded in rolling out an IT system that was specially designed for the container shipping industry, Integrated Regional Information System[2] (IRIS-2), in 1999. IRIS-2 integrates the business processes of all OOCL offices, customers' shipments and financial information into one system. OOCL was a finalist for the coveted Smithsonian Institution Award for Innovation in 1999 for the groundbreaking achievements with IRIS-2. IRIS-2 is written in GemStone/S Smalltalk, making it one of the largest Smalltalk applications in the world.[3]

OOCL was the first container shipping line in the world to have achieved the Safety, Quality and Environmental (SQE) Management System certification (which consolidates the ISM-Code, ISO9001.2000 and ISO14001 requirements).

OOCL maintained a 100 percent compliance with the Port of Long Beach Green Flag program in 2006 and 2007. OOCL donated its rebates, totaling US$140,000, back to community projects and charities in Long Beach.

OOCL also complies with the Qualship 21 program, which identifies quality operation of non-US flagged vessels, and holds the most rigid safety and pollution-prevention standards in the world.

OOCL has a had a voluntary fuel saving program in place since 2001, which is the most effective way to cut down on greenhouse gases (especially CO2). Initiatives to minimize fuel consumption include:

OOCL conducted a Shore Power Study (in 2003) and a Sea Water Scrubber Study (in 2005) in order to compile different ways to reduce emissions at both port and sea.

In 1992, five years in advance of the Montreal Protocol - an international treaty designed to protect the Earth's ozone layer - OOCL chose to change the design of its refrigerated container machinery in order to eliminate the production of CFCs (Chlorofluorocarbons). Today, OOCL only uses CFC-free refrigerants in all its reefer containers.

Based on the same selection criteria, the Employees' Children Scholarship is awarded annually to the children of employees in all OOCL offices in all countries and regions.

OOCL also participates in many other types of community support with worthy purposes. One of the major and on-going projects that OOCL is involved in is Project HOPE (Health Opportunities for People Everywhere). OOCL is assisting with the transportation of the latest diagnostic medical equipment and supplies from the United States (donated by global corporations) to Shanghai Children's Hospital, China.

OOCL sponsors many musicals and shows visiting the Asia-Pacific region, including CATS, Phantom of the Opera, We Will Rock You, Swan Lake on Ice, Musical Moments and Chitty Chitty Bang Bang.

OOCL participates in the The Customs-Trade Partnership Against Terrorism program (C-TPAT) which is a voluntary government-business initiative to build cooperative relationships that strengthen and improve overall international supply chain and U.S. border security.

OOCL also complies with the International Ship and Port Facility Security Code (ISPS Code). The ISPS Code states that, as threat increases, the only logical counteraction is to reduce vulnerability. Subsequently, ships will be subject to a system of survey, verification, certification, and control to ensure that their security measures are implemented. This system will be based on a considerably expanded control system as stipulated in the 1974 Convention for Safety of Life at Sea (SOLAS). 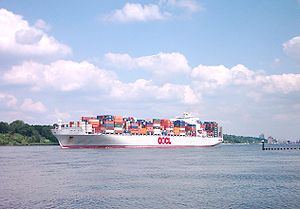 An OOCL container ship on the Elbe, in Hamburg, Germany.

OOCL was founded by C. Y. Tung In 1947 as the Orient Overseas Line. It changed its name to Orient Overseas Container Line in 1969, when it began the process of containerization.

In 1969, OOCL was the first Asian shipping line to transport containerized cargo across the Pacific, and in doing so changed the face of global trade in the Asia Pacific region.

At its peak, OOCL had a shipping fleet with over 150 freight ships, with a cargo capacity exceeding 10 million tons; it was one of the world's top seven shipping lines. At one stage it also owned the Seawise Giant, the largest ship ever built.

The founder of OOCL, the late C Y Tung, dreamed of creating the first international Chinese merchant fleet. In 1947, he achieved that dream when the first ship with all-Chinese crews reached the Atlantic coast of the USA and Europe. Regular cargo and passenger services were subsequently developed under the name of Orient Overseas Line.

When containerization began in 1969, the company was re-named Orient Overseas Container Line. In those days, Victory-class vessels could carry 300 TEU, a far cry from today's post-Panamax vessels that ply the world's oceans. In April 2003, OOCL took delivery of the SX-Class OOCL Shenzhen[5], then the largest containership ever built at 8,063 TEU, 2006 it was passed by Emma Mærsk.

In September 1970, Tung purchased the famous oceanliner RMS Queen Elizabeth to convert it into a floating university, to be known as Seawise University, in his efforts to keep the World Campus Afloat program alive. On 9 January 1972, the ship caught fire during refurbishing and sank into Hong Kong's Victoria Harbour and the wreckage had to be scrapped three years later.

In 2003 OOCL lost one of its senior executives - Courtenay Allan, who was at the time its Transatlantic Trade Director. Courtenay died after falling down a lift shaft on one of its ships, the OOCL Montreal in Le Havre[6]. In 2007 the case has moved on where the French Authorities are investigating in various jurisdictions around the world to establish the facts behind the case. Various initiatives by the Allan family have included a visit to Hong Kong with C. C. Tung - Chairman of OOCL in December 2006.

There are many other shipping companies whose history has become part of OOCL by absorption. These include Furness Withy, Houlder Brothers, Manchester Liners, Shaw Savill, PSNC, Prince Line & the Alexander Shipping Company.[7]