Operación Soberanía (Operation Sovereignty) was the codename of a planned Argentine military invasion of Chile to be carried out on 22 December 1978 due to the Beagle conflict dispute. The invasion was halted at the last minute and did not take place.

In 1971 Chile and Argentina agreed to binding arbitration to settle a boundary dispute (Beagle Channel Arbitration). On 22 May 1977 Queen Elizabeth II announced the judgment, which awarded the Picton, Nueva and Lennox islands to Chile.

On 25 January 1978 Argentina rejected the decision and attempted to militarily coerce[1][2][3][4] Chile into negotiating a division of the islands that would produce a maritime boundary consistent with Argentine claims.

At the time of the crisis, the Argentine military was substantially larger than that of Chile; in addition, the Chilean regime was more politically isolated and had suffered deteriorating relations with its chief suppliers of arms. The Chilean military, however, had the advantage of defending difficult terrain, as well as being a more professional force.[5][6][7][8] On the other hand decades of intervention by the Argentine armed forces in day-to-day politics had degraded their professional skills.[9]

There was considerable international condemnation of the Chilean regime's human rights record, with the United States expressing particular concern after Orlando Letelier's 1976 assassination in Washington D.C. The United States banned the export of weapons to Chile through the Kennedy Amendment, later International Security Assistance and Arms Export Control Act of 1976.[10][11] 16 Northrop F-5's were delivered to Chile before the embargo took effect, but they arrived without any armament.[12] In 1980 Chile was excluded from UNITAS joint naval maneuvers because of human rights violations.[13][14] Germany,[15] Austria[16] and the United Kingdom[17] the traditional supplier of the Chilean Armed Forces, did not supply weapons to Chile. 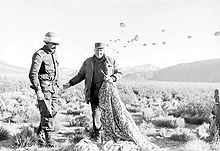 In 1978, the United States extended the Kennedy amendment to Argentina as well because of its human rights record,[18] which lead to the Armed Forces purchases to shift to Europe: France, Germany, and Austria exported weapons to Argentina even during the critical phase of the Beagle conflict, as Argentina had already rejected the international binding Arbitral Award. In December 1978, when the outbreak of war appeared unavoidable, the German shipbuilding and engineering works Blohm + Voss and the Argentine Junta agreed to the building of four destroyers.[19] In November 1978 France delivered two corvettes to Argentina, originally built for the apartheid Regime in South Africa. The corvettes, Good Hope and Transvaal, could not be delivered because of anti-apartheid embargoes. In Argentina they were renamed ARA Drummond and ARA Guerrico . United States President Ronald Reagan (1981–1989) would later improve relations to Argentina due their military support in fighting Nicaragua's Contras.[20] (See Operation Charly).

An overview of both countries' defence spending:[22]

The Argentines' numerical advantage was counterbalanced by the following factors:

The Ambassador of the United States in Argentina (1978) Raúl Castro described the attitude of the Argentine military towards a possible war with the following:

"They supposed that they were going to invade Chile, Santiago especially. It seemed to them something very easy; Just a matter of crossing the border and that the Chileans were going to surrender right away. And I told them: No, no, you are mistaken. They have a better Navy than yours. They are well armed, and are very strong"[26]

Augusto Pinochet foresaw a long and bloody war, a kind of partisan war:

"a guerrilla war, killing every day, shooting people, by both sides, and in the end, by a matter of fatigue, we would have reached peace"[27]

Argentina solicited a Peruvian attack in Chile's north, but Peru rejected this demand and ordered only a partial mobilization.[28]

Attack position of Argentine Forces during the Operation Soberania against Chile on 22. Dec. 1978.

No Argentine documents or statements concerning the planning of the war of aggression[29] against Chile have been released. But so many individual accounts exist among the Argentine ranks that the existence of a plan has not been disputed.

The Argentine Government planned to first occupy the islands around Cape Horn and then, in a second phase, either to stop or continue hostilities according to the Chilean reaction.[30] Argentina had already drafted a declaration of war.

An Argentine complaint in the UN Security Council over Chile's military occupation of the disputed islands was to precede the attack.

The Argentines planned amphibious landings to seize the islands southwards of the Beagle Channel, along with massive land-based attacks:

The Second Army Corps under the command of Leopoldo Galtieri would protect the north of Argentina from a potential Brazilian attack and its II Brigada de Caballería blindada would protect the Argentine region of Río Mayo in Chubut Province from a possible Chilean attack.

Plans after the invasion

For the postwar phase of the operation, the Argentine Navy prepared political instructions to be followed in the southern zone after the disputed islands were under Argentinian sovereignty. They defined the new border, navigation rights for Chilean ships, instructions in case of confrontations with the Chilean Navy, dealing with injured personnel, prisoners of war, etc.[34] 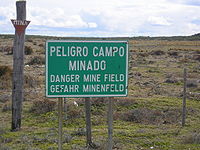 There was no surprise factor, since the Chilean military kept movements of the Argentine fleet under surveillance and monitored the buildup of Argentine troops. Chilean troops were deployed along the border, ready to meet any invaders.

Chile planted mines in certain areas along its borders with Argentina, Bolivia and Peru.[35] and dynamited some mountain passes[36] Parts of route 9-CH between Punta Arenas and Puerto Natales were selected to serve as extra airstrips in the case of an invasion.[37] A defensive position was built up the narrowest part of Brunswick Peninsula in order to avoid or delay an Argentine capture of Punta Arenas.[38] In the Puerto Natales area the Chilean army prepared for guerrilla warfare if the defensive lines would be penetrated.[39] In contrast to the defensive war planned by the Chilean Army in Punta Arenas and Puerto Natales, the Chilean army had plans for an attack to invade the Argentine part of Tierra del Fuego, but the control of Tierra del Fuego Island was considered a secondary goal since its control was believed to depend on the outcome of the clash of the navies.[40]

The combat-ready Chilean fleet sailed on 22 December 1978 from the fjords of Hoste Island to frustrate an Argentine landing. Rear Admiral Raúl López, Chief of the Chilean fleet, kept silent as to whether he would simply wait or initiate an attack on the enemy navy.

During the height of the Beagle crisis in 1978 weapon scientist Carlos Cardoen was contacted by Chilean Air Force commander Fernando Matthei and designed on his request a light bomb, that could be dropped from any airforce plane, in only 15 days. When asking Matthei what did he wanted the bomb for he reportedly answered: "to fuck up".[41]

Apart from the book «La escuadra en acción» about the Chilean Navy in 1978, no other Chilean defensive plans have been released. 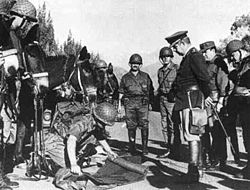 On D-day, a severe storm impeded Argentine operations in the disputed area. Meanwhile Pope John Paul II, alarmed by the situation, decided to act personally and informed both governments that he was sending his personal envoy, Cardinal Antonio Samoré, to both capitals. Six hours before landing, the Argentine fleet turned back and Operation Soberanía was called off.[42]

Alejandro Luis Corbacho, in "Predicting the probability of war during brinkmanship crisis: The Beagle and the Malvinas conflicts" [3] considers the reasons for cancelling the operation (p. 45):

The newspaper Clarín explained some years later that such caution was based, in part, on military concerns. In order to achieve a victory, certain objectives had to be reached before the seventh day after the attack. Some military leaders considered this not enough time due to the difficulty involved in transportation through the passes over the Andean Mountains.

According to Clarín, two consequences were feared. First, those who were dubious feared a possible regionalization of the conflict. Second, as a consequence, the conflict could acquire great power proportions. In the first case decisionmakers speculated that Peru, Bolivia, Ecuador, and Brazil might intervene. Then the great powers could take sides. In this case, the resolution of the conflict would depend not on the combatants, but on the countries that supplied the weapons.

Unlike the prelude to the 1982 invasion of the Falkland Islands, from the beginning of Operation Soberania there were no critical misconceptions on Argentina's side about Chile's commitment to defend its territory: the entire Chilean Navy was in the disputed area, an unequivocal fact at Cape Horn.[45] As stated by David R. Mares in "Violent Peace: Militarized Interstate Bargaining in Latin America":[46]:142

These Chilean advantages do not imply that it could have won the war against Argentina, but that is not the relevant point. To deter their neighbors the Chileans do not have to demonstrate a capability to win. They need, instead, to make a credible case that a military adventure against Chile would not be cheap. In 1978, the Argentine Junta could not be very confident that war would produce a low-cost victory against Chile.

L.F. Galtieri: "[Chile] have to know that what we are doing now, because they will be the next in turn.[47]

Argentine Falklands War veteran Martín Balza, Chief of Staff of the Argentine Army (1991–1999), caused a stir in 2003 when he declared his conviction that in 1978, Chile would have won the war had it broken out.[48]