Vacuum flask
"Thermos" redirects here. For other uses, see Thermos (disambiguation).
This article is about the vacuum-insulated flask. For the flask used in filtration under vacuum, see Büchner flask. 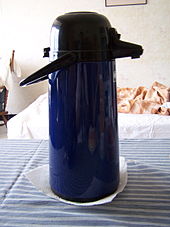 Domestic vacuum flask, used for maintaining the temperature of liquid such as coffee 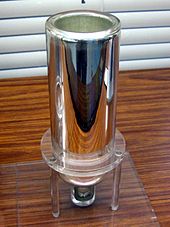 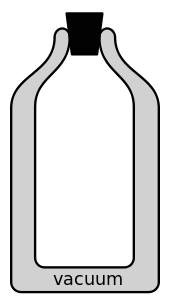 Diagram of a vacuum flask 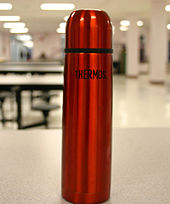 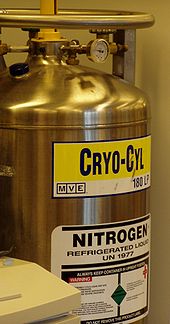 A cryogenic storage dewar of liquid nitrogen, used to supply a cryogenic freezer

A vacuum flask (also known as a Dewar flask, Dewar bottle or Thermos) is an insulating storage vessel which keeps its contents hotter or cooler than its surroundings. Invented by Sir James Dewar in 1892, the vacuum flask consists of two flasks, placed one within the other and joined at the neck. The gap between the two flasks is partially evacuated of air, creating a near-vacuum which prevents heat transfer by conduction or convection.

Vacuum flasks are used domestically to keep beverages hot or cold for extended periods, and for many purposes in industry.

The vacuum flask was invented by Scottish physicist and chemist Sir James Dewar in 1892 and is sometimes referred to as a Dewar flask or Dewar bottle after its inventor. The first vacuum flasks for commercial use were made in 1904 when a German company, Thermos GmbH, was formed. Dewar failed to register a patent for his invention and it was subsequently patented by Thermos, to whom Dewar lost a court case in claiming the rights to the invention.[1]

"Thermos" remains a registered trademark in some countries, but was declared a genericized trademark in the U.S. in 1963 as it is colloquially synonymous with vacuum flasks in general.[citation needed]

The vacuum flask consists of two flasks, placed one within the other and joined at the neck. The gap between the two flasks is partially evacuated of air, creating a near-vacuum which prevents heat transfer by conduction or convection. Heat transfer by thermal radiation may be minimized by silvering flask surfaces facing the gap, but can become problematic if the flask's contents or surroundings are very hot; hence vacuum flasks usually hold contents below water's boiling point. Most heat transfer occurs through the flask's neck and opening, where there is no vacuum. Vacuum flasks are commonly made of metal, glass, foam, or plastic, and have their opening stoppered with cork or plastic. Vacuum flasks are commonly used as insulated shipping containers.

Several applications rely on the use of double vacuum flasks, such as NMR and MRI machines. These flasks have two vacuum sections. The flasks contain liquid helium in the inside flask and liquid nitrogen in the outer flask, with one vacuum section in between. The loss of expensive helium is limited in this way.

Vacuum flasks are used to maintain their contents (often but not always liquid) at a temperature higher or lower than ambient temperature, while retaining the ambient pressure of approximately 1 atmosphere (14.7 psi). Domestically and in the food industry, they are often used to keep food and drink either cold or hot. A typical domestic vacuum flask will keep liquid cool for about 24 hours, and warm for up to 8.

Some vacuum flasks include a fitted cup or two, for convenience of use with drinks, especially during traveling or family picnics. All designed and combined in one.

In laboratories and industry, vacuum flasks are often used to store liquids which become gaseous at well below ambient temperature, such as oxygen and nitrogen; in this case, the leakage of heat into the extremely cold interior of the bottle results in a slow "boiling-off" of the liquid so that a narrow unstoppered opening, or a stoppered opening protected by a pressure relief valve, is necessary to prevent pressure from building up and shattering the flask. The insulation of the vacuum flask results in a very slow "boil", and thus the contents remain liquid for a long time without the need for expensive refrigeration equipment.

Vacuum flasks have been used to house standard cells, and ovenized zener diodes, along with their printed circuit board, in precision voltage regulating devices used as electrical standards. The flask helped with controlling the zener temperature over a long time span, and was used to control the output voltage of the zener standard, due to temperature fluctuation, to within a few parts per million.

One notable use was by Guildline Instruments, of Canada, in their "Transvolt", model 9154B, saturated standard cell, which is an electrical voltage standard. Here, a silvered vacuum flask, that was encased in foam insulation, and using a large glass vacuum plug, held the saturated cell. The voltage output of the device was 1.018 volts, and was held to within a few parts per million.

The principle of the vacuum flask makes it ideal for storing certain types of rocket fuels, and NASA used it extensively in the propellant tanks of the Saturn launch vehicles in the 1960s and 1970s.[citation needed]

In December of 2010, airport security in Canada and the United States began subjecting insulated beverage containers to greater scrutiny, because of the possibility that they could be used to conceal explosives. A U.S. military official said that officials were trying to anticipate possible terror attacks.[3]