The Shelby Mustang SVT Cobra was a pony car built by Ford Motor Company and Shelby Special Vehicle Team It is a high performance version of the Mustang built by Ford, sitting in the model range above the Mustang GT model. On three occasions, Ford also produced a higher-performance Cobra R variant.

The 1993 Ford Mustang SVT Cobra was launched during the 1992 Chicago Auto Show. It was the premier vehicle of Ford's newly established SVT division, designed to showcase SVT's four hallmarks of Performance, Substance, Exclusivity and Value.[1] The exterior of the 1993 SVT Cobra does not represent a radical departure from the year's GT model: However, there are subtle differences, as explained below.

The true redesign and upgrade occurred beneath the bodywork: The powertrain was driven by a 302 CID V8 (5.0L) motor, producing 235 hp (175 kW) and 280 ft·lbs (380 N·m) of torque. According to Road & Track, this could send a Cobra through the 1/4 mile in 14.5 seconds at a trap speed of 98 mph (158 km/h). Acceleration from zero to 60 mph (97 km/h) took 5.9 seconds.[2] The drivetrain received an upgraded transmission, rear disc brakes, and for the first time on a factory Mustang, 17" unidirectional wheels. The suspension was not neglected, either: Cobra models received a softer, more compliant ride compared to the GT model. This was accomplished with model-specific springs and sway bars.

The 1993 SVT Cobra's short block (cylinder block, crankshaft, rods, and pistons) was carried over from the GT model. To this, Ford SVT engineers added the following performance items:[3]

With the increased engine output of the new Mustang SVT Cobra, the Borg-Warner World Class T-5 transmission (which was only used in the Cobra) needed an internal upgrade. This upgrade consisted of custom gearing 1-3(which were reduce 10% and hardened), 4th/5th(just hardened) gear was the same as standard T-5's found in the Lx/GT's. The clutch for the Cobra was increased in size over the standard Lx/GT clutches(10.5in vs 9.75in).

A Cobra "R" model was also produced in 1993. It featured larger brakes, Koni shocks and struts, an engine oil cooler, a power steering cooler, and a factory rear seat delete. Since the Cobra "R" was race oriented, options such as air conditioning and a stereo system were not offered. Each of the 107 produced were offered in Vibrant Red only.

Ford re-introduced the Cobra in mid-1994 featuring the new styling as well as larger brakes, a revised suspension setup and wider wheels than the outgoing version, a "GT-40" lower intake and Cobra specific upper intake as well as GT-40 cast iron heads. Power was boosted to 240 hp (180 kW), though. New colors were introduced, Rio Red, Crystal White, and Black keeping the total palatte at three. Differences between GT and Cobra included the front bumper (Cobras feature round fog lights), Cobra-specific wheels, and in 1994 and 1995 the Cobra utilized the LX (V-6 3.8L) 'MUSTANG' rear bumper, while the 'COBRA' rear bumper didn't appear until 1996. Unique for the 1995 Cobra was the removable hard top option. These models were essentially the same as the convertible Cobra but had several small provisions to accept the retaining mechanisms of the fiberglass top and dome/map light wiring.

In the wake of the '93 R’s unexpected success, SVT engineers developed a more powerful R-model based on the 1995 Cobra. Top priority became addressing customer requests for a larger, more powerful engine and more fuel capacity. In response to those requests, SVT replaced the Cobra’s 5.0 L V8 with an SVT modified version of Ford’s 5.8 liter Windsor V8, re-engineered to produce 300 horsepower (220 kW) and installed a Kevlar 20 U.S. gallons (76 L) fuel tank. To handle the torque of the more powerful engine, a Tremec 3550 5 speed manual transmission was installed. See also 5-speed T-5 manual. Again, weight-savings was targeted, so there was no back seat, radio, power windows/seats or air-conditioning—not even fog lights, which were omitted to provide ducts for getting cool air onto the front disk brakes. Heavy-duty progressive-rate springs, thicker stabilizer bars and a front strut tower brace helped improve handling on the racetrack. Only 250 vehicles were built, available only in white with saddle cloth interior, each with a unique center-tiered fiberglass hood tall enough to clear the engine and induction system.

For 1996, Ford finally did away with the aging 5.0 liter V8 in the Mustang, replacing it with a new aluminum 4.6 liter, DOHC, "modular" unit that was smoother and had slightly better fuel economy. This engine produced 305 hp (227 kW) and 300 lbf·ft (410 N·m) of torque, making the new Cobra capable of high-13 second quarter miles. Early models were backed by the Borg Warner T-45 5-speed manual transmission. Late in 1998, Tremec bought production rights for the T-45, although it remained unchanged in terms of strength. In 1996 Ford also introduced the Mystic Cobra which featured color shifting paint manufactured by BASF. The paint was green based, and depending on the angle it was viewed the colors shifted from green to purple to root beer to gold. The 1998 Cobra was the last year of the return style fuel system which was replaced with a newer returnless system in 1999.

With the introduction of the "new edge" Mustang in 1999, came a new SVT Cobra. All 1999-2001 Cobras featured independent rear suspension, unique to the Cobras. They also used a newer returnless fuel system which helped Ford meet tightening emission standards. The new Cobra had an upgraded 4.6L DOHC engine with 320 hp (239 kW) and 317 ft·lbf (429 N·m) of torque. The 4.6 L Cobra was not produced in 2000. Ford replaced the intake manifold, exhaust and computer components to produce 320 hp (240 kW). The Cobra came back in 2001 with the same power rating, close to its GM competition, the Camaro SS and Pontiac Trans Am Ram Air WS6 package that produced 325 hp (242 kW). While the 2001 Cobra shares almost all the same components of the 1999, some changes were made including: 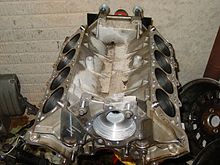 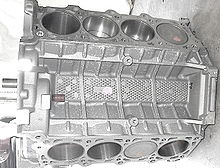 In the pictures at right showing the two blocks of the SN-95 2 SVT Mustang Cobra, note the extra ribs designed to impart strength to the weaker WAP. Also, note the hatching in valley of the Teksid is square, while the WAP has diagonal hatching.

A similar Cobra model was produced in the US in 2002 for export to the Australian market.*

In 2000, the Cobra R returned for a production run of 300 units (effectively taking the place of the standard Cobra for that model year) with a 5.4L DOHC engine (6500-rpm redline) that was rated at 385 hp (287 kW) and 385 lbf·ft (522 N·m) of torque, although independent dyno tests have shown that it produced rear-wheel output that nearly matched both of those numbers, suggesting the engine may have been under rated. As before, this model was designed to be a race ready high performance vehicle in a perfectly street legal package; as such, it lacked many of the comforts the base production line Cobra enjoyed. This model had no radio/audio equipment, no air conditioning, and no rear seat. Each of the 300 produced featured a charcoal interior with Recaro buckets and sporting a Performance Red exterior. 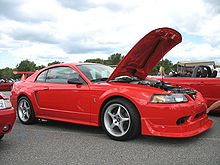 The 2000 Cobra R had several distinguishing visual and performance features that allow one to easily identify it as something more than a normal 1999 or 2001 Cobra. The "power dome" hood for instance, is taller than the normal Cobra hood, and has gills that can be cut out to reduce engine compartment temperatures. The rear spoiler is tall and wide, providing much needed down force at track speeds. The 2000 Cobra R is equipped with Eibach springs that lower the car 1.5 inches in front and 1.0 inch out back. This model also uses Bilstein shocks and struts, Brembo 4-piston front calipers acting on 13 inch rotors cooled by large ducts, along with a race-style fuel cell that is clearly visible protruding under the V6-style rear diffuser. The front bumper is adorned with a low riding, removable front diffuser. The wheels are also uniquely styled silver five spoke 18-inch (460 mm) x 9.5-inch (240 mm) alloys wrapped in aggressive BF Goodrich G-Force KD tires. The hand built SVT engine employes special DOHC cylinder heads, a "Trumpet-style" intake manifold, aggressive camshafts, short tube headers, and connected to Cobra catalysts, a Bassani X-pipe, and a unique Borla dual side exiting exhaust system. This model also features 3.55 gears, a Gerodisc hydro-mechanical differential with speed and torque sensitivity, and a Tremec T-56 6 speed transmission that is closely geared for drag racing or road course usage. Despite these close ratios, the 2000 Cobra R also enjoyed a 175.3 mph (282 km/h) top speed.

With its sharp styling, stiff suspension, and overall aggressive engineering, SVT fulfilled the 2000 Cobra R's intent of a pure sport and track car.

Debuting in early 2002, the 2003 Cobra, codenamed "Terminator" by the SVT development crew, which quickly fell into common usage for the 2003/04 Cobra, came with a supercharged 4.6 L DOHC engine.Numerous improvements were made to the powertrain and driveline to handle the increase from the previous model year. A cast iron block was used instead of aluminum, with stronger internals, including forged Zolner pistons and Manley H-beam connecting rods that were modified with a wrist pin oiling hole by the SVT engine builders. These upgrades were critical in order to support the 8 psi (0.55 bar) of boost delivered from the stock Eaton M112 roots supercharger. Other improvements include the use of an aluminium flywheel connected to a Tremec T-56 six-speed transmission, 3.55:1 rear axle ratio and stronger 31 spline half shafts with revised upper and lower control arms. These modifications launched the Cobra from 0-60 mph in 4.5 seconds and the quarter mile in the high 12's at over 110 mph (180 km/h). Some have gone as low as 12.4 seconds with a professional driver and good conditions in stock form.

Although many believe there was no 2002 Cobra, there was a very small release. There were only about 100 vehicles built, and they were all shipped to Australia. Other changes included additional lights in the lower bumper, and the steering wheel was moved to the right side of the car. 2002 Mustang Cobra

The 2004 Cobra was much the same as the 2003 Cobra with a few minor updates, including new paint color options (Screaming Yellow, Competition Orange and Mystichrome, which featured seats with custom colored inserts), a slightly updated exhaust system, which helped to eliminate the Gas Guzzler Tax that the 2003 suffered, as well as some minor interior changes.

A definitive history of this model and John Coletti's SVT operations was captured in the non-fiction book Iron Fist, Lead Foot by Frank Moriarty.