Nicéphore Niépce (born Joseph Niépce) March 7, 1765 – July 5, 1833)[1] was a French inventor, most noted as one of the inventors of photography[2] and a pioneer in the field. He is most noted for producing the world's first known photograph in 1825.[3] Among Niépce's other inventions was the Pyréolophore, the world's first 'internal combustion engine', which he conceived, created, and developed with his older brother Claude, finally receiving a patent on July 20, 1807 from the Emperor Napoleon Bonaparte, after successfully powering a boat upstream on the river Saône.[4]

Niépce was born in Chalon-sur-Saône, Saône-et-Loire, where his father was a wealthy lawyer; this caused the whole family to flee the French Revolution. His elder brother Claude (1763–1828) was also his collaborator in research and invention, but died half mad and broke in England, having squandered the family wealth in pursuit of non-opportunities for the Pyréolophore. He also had a sister and a younger brother called Bernard.[5][6][7][8][9]

Nicéphore was baptised Joseph but adopted the name Nicéphore, in honour of Saint Nicephorus the ninth-century Patriarch of Constantinople, while studying at the Oratorian college in Angers.[citation needed] At the college he learned science and the experimental method, rapidly achieving success and graduating to work as a professor of the college.[5][6][7][8]

Niépce served as a staff officer in the French army under Napoleon, spending a number of years in Italy and on the island of Sardinia, but ill-health forced him to resign, whereupon he married Agnes Romero and became the Administrator of the district of Nice in post-revolutionary France. In 1795, Niepce resigned as administrator of Nice to pursue scientific research with his brother Claude. One source reports his resignation to have been forced due to his unpopularity.[5][6][7][8][9]

In 1801 the brothers returned to the family's estates in Chalon to continue their scientific research, and where they were united with their mother, their sister and their younger brother Bernard. Here they managed the family estate as independently wealthy gentlemen-farmers, raising beets and producing sugar.[5][6][7][8][9][9]

In 1827 Niépce journeyed to England to visit his seriously ill elder brother Claude, who was now living in Kew, near London. Claude had descended in delirium and squandered much of the family fortune chasing inappropriate business opportunities for the Pyréolophore.[5][6]

Nicéphore Niépce died on July 5, 1833, financially ruined by the semi-delirious spending of Claude such that his grave in the cemetery of Saint-Loup de Varennes was financed by the municipality. The cemetery is near the family house where he had experimented and had made the world's first photographic image.[7]

His son Isidore (1805–68) formed a partnership with Daguerre after his father's death and was granted a government pension in 1839 in return for disclosing the technical details of Nicéphore's heliogravure process.[6][7]

A cousin, Claude Félix Abel Niépce de Saint-Victor, 1805–70, was a chemist and was the first to use albumen in photography. He also produced photographic engravings on steel.[9][10]

One of the two earliest known evidences of seminal photographic activity, made by Nicéphore Niépce in 1825 by the heliograph process. This illustration is of an etching printed from a metal plate that was etched following alteration of the ground by sunlight; the image is of a 17th-century Flemish engraving showing a man leading a horse. 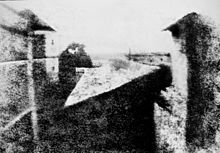 Nicéphore Niépce's earliest surviving photograph of a scene from nature taken with a camera obscura,
View from the Window at Le Gras (1826)

Niépce took what is believed to be the world’s first photogravure etching, in 1822,[11] of an engraving of Pope Pius VII, but the original was later destroyed when he attempted to duplicate it.[11] The earliest surviving photogravure etchings by Niépce are of a 17th century engraving of a man with a horse and of an engraving of a woman with a spinning wheel. Niépce did not have a steady enough hand to trace the inverted images created by the camera obscura, as was popular in his day, so he looked for a way to capture an image permanently. He experimented with lithography,[12] which led him in his attempt to take a photograph using a camera obscura.[13] Niépce also experimented with silver chloride, which darkens when exposed to light, but eventually looked to bitumen, which he used in his first successful attempt at capturing nature photographically. He dissolved bitumen in lavender oil, a solvent often used in varnishes, and coated the sheet of pewter with this light capturing mixture.[14] He placed the sheet inside a camera obscura to capture the picture, and eight hours later removed it and washed it with lavender oil to remove the unexposed bitumen.

He began experimenting to set optical images in 1793. Some of his early experiments made images, but they faded very fast. Letters to his sister-in-law around 1816 indicate that he found a way to fix images on paper, but not prevent them from deterioration in light. The earliest known, surviving example of a Niépce photograph (or any other photograph) was created in 1825.[3] Niépce called his process heliography, which literally means "sun writing".[15] Nevertheless, semiologist Roland Barthes, in a Spanish edition of his book "La chambre claire", "La cámara lúcida" (Paidós, Barcelona,1989) shows a picture from 1822, "Table ready", a foggy photo of a table set to be used for a meal.

Starting in 1829[16] he began collaborating on improved photographic processes with Louis Daguerre, and together they developed the physautotype, a process that used lavender oil. The partnership lasted until Niépce’s death in 1833. Daguerre continued with experimentation, eventually developing a process that little resembled that of Niépce.[17] He named this the "Daguerréotype", after himself. He managed in 1839 to get the government of France to purchase his invention on behalf of the people of France. The French government agreed to award Daguerre a yearly stipend of 6,000 Francs for the rest of his life, and to give the estate of Niépce 4,000 Francs yearly. This arrangement rankled with Niépce's son, who claimed Daguerre was reaping all the benefits of his father's work. In some ways, he was right—for a good many years, Joseph Nicéphore Niépce received little credit for his significant contribution to the development of photography. Later historians have reclaimed Niépce from relative obscurity, and it is now generally recognized that his "heliographic" process was the first successful example of what we now call photography[14]: an image created on a light-sensitive surface, by the action of light.

The Pyréolophore, probably the world's first internal combustion engine to be built, was invented and patented by the Niépce brothers in 1807. This engine ran on controlled dust explosions of Lycopodium and was installed on a boat that ran on the river Saône. Ten years later, they were the first in the world to make an engine work with a fuel injection system.[18] Coincidentally, in 1807 François Isaac de Rivaz also constructed an engine powered by internal combustion .

In 1807 the imperial government opened a competition to receive projects of hydraulic machines to replace the original Marly Machine (located in Marly-le-Roi) that delivered water to the Palace of Versailles from the Seine river. The machine was built in Bougival in 1684, from where it pumped water a distance of one kilometer distance and raised it 150 meters. The Niépce brothers conceived a new principle for the machine and improved it once more in 1809. The machine had undergone a lot of changes in many of its parts. The mechanisms in the system were more elaborated: its pistons joined to the advantage of being more precise, another one that is to create far less resistance. They tested it many times, and the result was that with a drop of 4 feet 4 inches, it lifted to 11 feet the 7 /24 of the water it loses[clarification needed]. But in December 1809 they got a message that they had waited too long and the Emperor had taken on himself the decision to ask the engineer Perier (1742–1818) to build a fire machine, also known as a steam engine, to operate the pumps at Marly.[19]

In 1818 Niépce became interested in the ancestor of the bicycle, a Laufmaschine invented by Karl von Drais in 1817. He built himself a model and called it the vélocipède (fast foot) and caused quite a sensation on the local country roads. Niépce improved his machine with an adjustable saddle and it is now exhibited at the Niépce Museum. In a letter to his brother Nicéphore contemplated motorizing his machine.[20]

The lunar crater Niepce is named after him.

As of 2008[update] Niépce's photograph, View from the Window at Le Gras, is on display in the Harry Ransom Humanities Research Center at the University of Texas at Austin. The image was rediscovered in 1952 by historians Alison and Helmut Gernsheim.

The Niépce Prize has been awarded annually since 1955 to a professional photographer who has lived and worked in France for over 3 years. It was introduced in honour of Nièpce by Albert Plécy of the l'Association Gens d'Images.