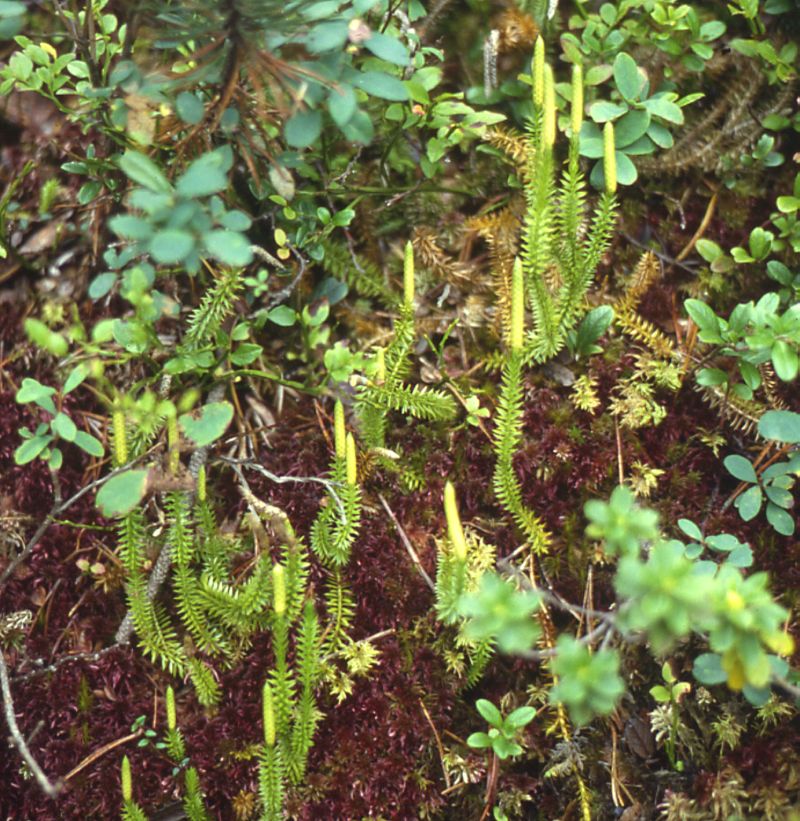 "Lycopodium" is a of es, also known as "ground pines", in the family , a family of (see ). They are less, vascular, terrestrial or epiphytic s, with widely-branched, erect, prostrate or creeping stems, with small, simple, needle-like or scale-like leaves that cover the stem and branches thickly. The fertile leaves are arranged in cone-like "strobilli". Specialized leaves ("sporophylls") bear reniform -cases () in the axils, which contain spores of one kind only. These club-shaped capsules give the genus its name.

Lycopods reproduce sexually by spores. The plant has an underground sexual phase that produces s, and this alternates in the life cycle with the spore-producing plant. The prothallium developed from the spore is a subterranean mass of tissue of considerable size and bears both the male and female organs ( and ). However, it is more common that they are distributed vegetatively through above or below ground .

There are approximately 200 species, with 37 species widely distributed in temperate and tropical climates, though they are confined to s in the tropics.

The term Lycopodium is also used to describe the yellowish, powdery spores of certain club mosses, especially "", used in the past in , fingerprint powders, as a covering for s and s. The term "Lycopodium mask" is sometimes used to describe a type of flamethrower-mask worn by some music bands or artists on stage, such as , most notably on the song , featured in the movie . have got themselves banned when using the substance in flamethrowers. In experiments, the powder is also used to make sound-waves in air visible for observation and measurement.

It is also used as an ice cream stabilizer

* [http://homepages.caverock.net.nz/~bj/fern/lycopodium.htm Species list] (takes a broad view of the genus, including the species here separated in the genus "")
* [http://www.angelo.edu/faculty/kboudrea/demos/lycopodium/lycopodium.htm Burning Lycopodium Powder: Simulating a Grain Elevator Explosion] by Kevin A. Boudreaux