May devotions to the Blessed Virgin Mary

May devotions to the Blessed Virgin Mary

May Devotions to the Blessed Virgin Mary refers to special Marian devotions held in the Catholic Church during the month of May honoring the Virgin Mary as "the Queen of May". These services may take place inside or outside. May devotions have existed throughout Roman Catholic church since the 16th century and since that time have been a regular feature of Catholic life.[1] 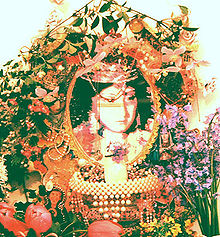 May Altar in Ireland, - Religious imagery of Mary as Queen of May, work of artist Clare O Hagan

May devotions originated in Italy in the in the 16th century.[1] From Italy they spread to Central Europe, where daily or weekly, May devotions take place during the month of May of each year, and specific prayers for them were promulgated in Rome in 1838.[2] Some of the devotions are accompanied by pilgrimages. The last devotion on May 31 is often followed by a solemn procession, during which a statue of the Virgin Mary or a portrait is carried back into the church. Some May devotions may take place outside in a forest or a dedicated special place. Before Vatican II, May devotions were more popular.

There is no firm structure as to the content of a May devotion. It includes usually the singing of Marian anthems, readings from scriptures, a sermon, and or presentation by local choirs. The whole rosary is prayed separately and is usually not a part of a Marian devotion, although Hail Mary's are included. The devotion, was promoted by Jesuits and spread to Jesuit Colleges and to the entire Latin church and since that time it has been a regular feature of Catholic life.[3]

Family devotions during the month of May

Marian devotions may take place within the family, around a "May Altar" consisting of a table with a Marian picture decorated with many May flowers. The family would pray together the rosary. This specific devotion has been supported be several popes including Pope Pius XII in his encyclical Ingruentium Malorum:

Mary, Queen of May

May devotions may be different in various countries but the Marian title Queen of May exists identically in several countries as manifested in Marian songs. In English speaking countries such as England, Ireland and the USA, a Marian hymn uses the following text: Hail Virgin, dearest Mary! Our lovely Queen of May! O spotless, blessed Lady, Our lovely Queen of May. Your children, humbly bending, Surround your shrine ...[5] Another well-known Marian "Queen of May" song ends with the words:

In German-speaking countries, the equivalent word is Maienkönigin: Mary, Queen of May, we come to greet you.You see us at your feet. (Maria Maienkönigin,. wir kommen dich zu grüßen. O holde Freudenspenderin,. sieh uns zu deinen Füßen.) [7] Another similar song greets Mary, the queen of May, who is greeted by the month of May.[8]

May crowning is a traditional Roman Catholic ritual that occurs in the month of May of every year. In some countries, it takes place on or about May 1, however, in many United States Catholic parishes, it takes place on Mother's Day. An image or likeness of the Blessed Virgin Mary is ceremonially crowned to signify her as Queen of Heaven and the Mother of God. The practice is also maintained in the same fashion by some Anglo Catholic Anglicans.

A number of traditions link the month of May to Mary. In ancient Greece, May was the month dedicated to Artemis and some people[who?] allege that the reverence for this goddess was transferred to Mary with the Christianization of Europe. Later, the Coronation of the Virgin became a popular subject in art. Alfonso X, king of Castile wrote in his "Cantigas de Santa Maria" about the special honoring of Mary during specific dates in May. Eventually, the entire month was filled with special observances and devotions to Mary. The tradition of honoring Mary in a month-long May devotion is believed to have originated in Italy, but spread eventually around the Roman Catholic world in the 19th century together with a month-long devotion to Jesus in June and the Rosary in October.

In Eastern churches, crowning Mary was associated with adding ornamentation to an icon of Mary, sometimes as simple as adding additional gold trim. Perhaps in homage to this, Pope Clement VIII added two crowns to the icon of Mary with the Infant Jesus in the Saint Mary Major Basilica in Rome. The crowns were eventually lost, but were replaced by Gregory XVI in 1837 in a rite that was to become the standard practice for crowning.

Today, May crownings occur in many Roman Catholic parishes and homes with the crowning of a statue of Mary. The ceremony traditionally takes place with young girls dressed in dresses carrying flowers (traditionally hawthorn) to adorn the statue. One of the girls (often the youngest) carries a crown of flowers or an actual golden crown on a cushion for placement by the May Queen (often the oldest girl) on the statue. The flowers are replaced throughout the month to keep them fresh.

"Flores de Mayo" (Flowers of May)

In the Philippines and other countries, Mary is greeted with the Flores de Mayo (Flowers of May). The Faithful collect colorful flowers to decorate the Parish Church altars and aisles.[9] "Flores De Mayo" is celebrated in many towns. The communities congregate in the afternoons to pray the rosary, offer flowers to the Virgin Mary, and share homemade delicacies and snacks. Children and adults wearing their Sunday best, sing and dance to welcome the rains that will water the new crops.[9]

In the Philippines, the celebration is marked with a parade called the Santacruzan, where young ladies are chosen to represent certain historical (such as St. Helena) and traditional figures, called "reynas" (examples of these titles are "Reyna Elena" and "Reyna Emperatriz"). They parade through the town, escorted by young men or boys (for example, St. Helena is escorted by a young Constantine), under mobile arches heavily decorated with local flowers or other decorations meant to denote bounty.