Our Lady of the Pillar (Spanish: Nuestra Señora del Pilar) is the name given to the Blessed Virgin Mary for her claimed appearance during the start of Christianity in Spain. She is considered the Patroness of the country and the Spanish Civil Guard. Her shrine is in the Basilica of Our Lady of the Pillar in Zaragoza, by the river Ebro.[1] 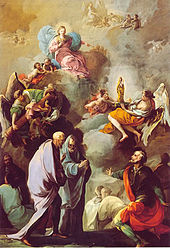 A painting by Goya depicting the Marian apparition to St. James the Greater

According to tradition, On January 2, 40 AD, in the early days of the Church, James the Greater, one of the original Twelve Apostles of Jesus Christ, was evangelizing the Gospel in what was then the pagan land of Caesaraugusta, now Zaragoza. He was disheartened with his mission, making little progress having only few converts who had been traveling with him. In his despair, while praying by the banks of Ebro River, Mother Mary miraculously appeared before him and his group, comforting him and promised to help. Mary gave him a column or pillar as a symbol, being carried by angels with an image of the Mother on top. James was instructed to build a chapel on the spot where Mary left the pillar, a place where she and the pillar would dwell forever; so that by the grace of God, will marvel those who believed and asked in their hour of need. James returned to Jerusalem after establishing the church in Zaragoza and was ordered beheaded in 44 AD by King Herod Agrippa I. The land he left eventually became believers of Christ through the works of his disciples.[2][3][4]

This is believed to be the very first apparition of Mary, and the only one before her assumption. Mary was still living in Jerusalem at that time, and was believed to have appeared to James through bilocation. The church established by St. James is the very first church dedicated to Mother Mary in the history of Roman Catholicism. [2]

The Shrine to Our Lady of the Pillar

The pillar, now presently enshrined by the larger Basilica of Our Lady of the Pillar, is believed to be the same one given and promised by Mary, in spite of numerous disasters that beset the church. A fire burned down the church previous to the basilica in 1434. During the Spanish Civil War, two bombs hit and damaged the basilica but none exploded. The event was attributed as a miracle, and the deactivated bombs have been on display at the basilica premises since.[5]

A closer look of the manto made with 1,536 paper origami pieces by an origami enthusiast group from Zaragoza

The image of the Blessed Virgin Mary may or may not be the original. Some report that the original wooden image was destroyed when the church burned down in 1434,[3] contradicting the report that it is still the original statue. The statue of the Blessed Virgin Mary is made of wood and stands 39 centimetres (15 in) tall while the 6 feet (1.8 m) pillar is made of Jasper.[2] The statue depicts Mother Mary with the baby Jesus on her left arm, who has a dove sitting on his left palm. Since the 16th century, the pillar is usually draped by a skirt-like cover called manto (in English: mantle).[3]

Our Lady of the Pillar is celebrated on 12th of October and is the patroness of Spain, the Hispanic peoples, and the Spanish Civil Guard. A grand nine-day festival known as Fiestas del Pilar is celebrated in Zaragoza every year in her honor. St. James (in Spanish: Santiago) is also venerated as the patron saint of Spain.

Veneration to Our Lady of the Pillar around the world

Ruled by Spain for over three hundred years, in the predominantly Catholic country of the Philippines, Our Lady of the Pillar is honored as the patroness in a number parishes and municipalities in the country; seven are named Pilar in her honor. There is a town named Pilar in the provinces of Abra, Bataan, Bohol, Capiz, Cebu, Surigao del Norte and Sorsogon. As in Spain, her feast day is celebrated every October 12.