Basilica of Our Lady of the Pillar

Basilica of Our Lady of the Pillar

The Basilica-Cathedral of Our Lady of the Pillar (in Spanish Catedral-Basílica de Nuestra Señora del Pilar) is a Roman Catholic church in the city of Zaragoza, Aragon, Spain. The Basilica venerates Blessed Virgin Mary, under her title Our Lady of the Pillar[1] praised as Mother of the Hispanic Peoples by Pope John Paul II.[2] It is reputed to be the first church dedicated to Mary in history.[3]

Local traditions take the history of this basilica to the dawn of Christianity in Spain attributing to an apparition to Saint James the Great, the apostle who had brought Christianity to the country.[4] This is the only known apparition of Mary to have occurred before her Assumption.[2]

Many of the kings of Spain, many other foreign rulers and saints have paid their devotion before this statue of Mary. Saint John of the Cross, Saint Teresa of Avila, Saint Ignatius of Loyola, and Blessed William Joseph Chaminade are among the most outstanding ones.[5] The Basilica of Our Lady of the Pillar is one of two minor basilicas in the city of Zaragoza, and is co-cathedral of the city alongside the nearby La Seo Cathedral. The architecture is of Baroque style, and the present building was predominantly built between 1681 and 1872.

Our Lady of the Pillar: a wooden statue on a column of jasper; the crown was added in 1681.

According to ancient local tradition, soon after the crucifixion and resurrection of Jesus, Saint James was preaching the Gospel in Spain, but was disheartened because of the failure of his mission.[4] Tradition holds that on 2 January 40 AD,[3] while he was deep in prayer by the banks of the Ebro,[6] the Mother of God appeared to him and gave him a small wooden statue of herself and a column of jasper and instructed him to build a church in her honor:[4]

This place is to be my house, and this image and column shall be the title and altar of the temple that you shall build.

About a year after the apparition James arranged to build a small chapel in Mary's honor, the first church ever dedicated to the honor of the Virgin Mary. After James returned to Jerusalem, he was executed by Herod Agrippa in about 44 AD, the first apostle to be martyred for his faith. Several of his disciples took his body and returned it for final burial in Spain.[4] This first chapel was eventually destroyed with various other Christian shrines, but the statue and the pillar stayed intact under the protection of people of Zaragoza.[5]

Numerous churches have been built upon this site through the years. The tiny chapel built by Saint James later gave way to a basilica-like enclosure during Constantine I's time; subsequently being transformed into Romanesque, then Gothic then Mudéjar styles.[7] The venerated shrines at Zaragoza date to the Christian Reconquest by King Alfonso I in 1118.[8] A church in the Romanesque style was built under the pontificate of Pedro de Librana[7] who is also credited with the oldest written testimonial to the Virgin at Zaragoza.[6] A tympanum on the south wall of this Romanesque church still stands.[7] 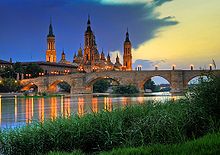 The basilica, viewed from across the Ebro river.

The Romanesque church was damaged by fire in 1434, and reconstruction began in the Mudéjar Gothic style.[7] A Gothic style church was built in the 15th century but only a few parts of it remain intact or were later restored, including the choir stand and the altarpiece in alabaster by Damián Forment.[9] 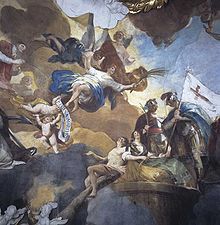 Detail of the fresco of The Queen of Martyrs in the dome, painted by Francisco Goya

The present spacious church in Baroque style was begun in 1681[6] by Charles II, King of Spain and completed in 1686.[5] The early constructions were supervised by Felipe Sanchez[7] and were later modified by Francisco Herrera the Younger under John of Austria the Younger.[10] In 1725, the Cabildo of Zaragoza decided to change the aspect of the Holy Chapel and commissioned the architect Ventura Rodríguez, who transformed the building into its present dimensions of 130 meters long by 67 wide, with its eleven cupolas and four towers. The area most visited is the eastern part of the chapel, because this is where the Holy Chapel by Ventura Rodríguez (1754) is built, which houses the venerated image of the Virgin. Around the Holy Chapel are the vaults or domes painted with frescoes by Francisco Goya: The Queen of Martyrs and Adoration of the Name of God.[9] By 1718 the church had been vaulted over. However, it was not until 1872 that the final touches were put to these vaults, when the main dome and the final spire were finished.[7]

During the Spanish Civil War of 1936–1939 three bombs were dropped on the church and none of them exploded.[3] Two of them are still shown in the Basilica.

Pillar and the image

The statue is wooden and 39 cm tall and rests on a column of jasper. The tradition of the shrine of El Pilar, as given by Our Lady in an apparition to Saint Mary Agreda and written about in The City of God, is that Our Lady was carried on a cloud by the angels to Zaragoza during the night. While they were traveling, the angels built a pillar of marble, and a miniature image of Our Lady. Our Lady gave the message to St James and added that a church was to be built on the site where the apparition took place. The pillar and the image were to be part of the main altar.[2] The image was crowned in 1905 with a crown designed by the Marquis of Griñi, and valued at 450,000 pesetas (£18,750, 1910).[6]

The building itself is a large rectangle with a nave and two aisles, with two other all-brick chapels, thus giving the whole a typically Aragonese touch. It is illuminated by large oculi, characteristic of the monuments of the region from the 17th century onwards. Twelve enormous pillars support the vaults of the nave and aisles; the whole is topped by domes, as are the chapels.[7]

The chapels within the Basilica include:

The feast of Our Lady of the Pillar, celebrating the first apparition of Mary to Hispanic people, is on October 12. This coincides with the Día de la Raza and the date of Columbus' discovery of the New World. Every Latin-American nation has donated national vestments for the fifteenth century statue of the Virgin, which is housed in the chapel.[7] Pope John Paul II praised El Pilar as Mother of the Hispanic Peoples during both his visits to the Basilica.[2]