Chromatography in general is used to separate components of a mixture based on their differing affinities for mobile and stationary phases of a column. The components can then be analyzed separately by various sorts of detectors which may or may not be integrated into an apparatus. Partition chromatography is based on differences in capacity factor, k, and distribution coefficient, Kd, of the analytes using liquid stationary and mobile liquid phase. An analyte is the substance or chemical constituent that is being analyzed.

By eliminating solid supports, permanent adsorption of the analyte onto the column is avoided, and a near 100% recovery of the analyte can be achieved. The instrument is also easily switched between various modes of operation simply by changing solvents. With liquid-liquid chromatography, researchers are not limited by the composition of the columns commercially available for their instrument. Nearly any pair of immiscible solutions can be used in liquid-liquid chromatography, and most instruments can be operated in standard or reverse-phase modes.

Solvent costs are also generally cheaper than for High-performance liquid chromatography (HPLC), and the cost of purchasing and disposing of solid adsorbents is completely eliminated. Another advantage is that experiments conducted in the laboratory can easily be scaled to industrial volumes. When GC or HPLC is carried out with large volumes, resolution is lost due to issues with surface-to-volume ratios and flow dynamics; this is avoided when both phases are liquid.

CCC can be thought of as occurring in three stages: mixing, settling, and separation (although they often occur continuously). Mixing of the phases is necessary so that the interface between them has a large area, and the analyte can move between the phases according to its partition coefficient.

If a less dense mobile phase is used it will rise through the stationary phase; this is called ascending mode. The eluent from one column is transferred to another; the more columns that are used, the more theoretical plates can be achieved. The disadvantage of DCCC is that flow rates are low, and poor mixing is achieved for most binary solvent systems, which makes this technique both time-consuming and inefficient. 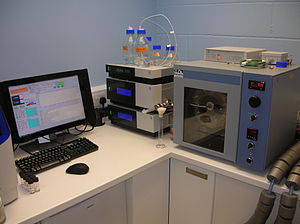 An Example of a HPCCC system

The operating principle of CCC equipment requires a column consisting of a tube coiled around a bobbin. The bobbin is rotated in a double-axis gyratory motion (a cardioid), which causes a variable gravity (G) field to act on the column during each rotation. This motion causes the column to see one partitioning step per revolution and components of the sample separate in the column due to their partitioning coefficient between the two immiscible liquid phases used.

HPCCC works in much the same way as HSCCC but with one vital difference. A seven-year R&D process that has produced HPCCC instruments that generated 240 g, compared to the 80 g of the HSCCC machines. This increase in g-level and larger bore of the column has enabled a tenfold increase in through put, due to improved mobile phase flow rates and a much higher stationary phase retention.[2]

Countercurrent chromatography is a preparative liquid chromatography technique, however with the advent of the higher g HPCCC instruments it is now prossible to operate instruments with sample loadings as low as a few milligrams, whereas in the past 100s of milligrams have been necessary.

The modern era of CCC began with the development by Dr. Yoichiro Ito of the planetary centrifuge and the many possible column geometries it can support. These devices make use of a little-known means of making non-rotating connections between the stator and the rotor of a centrifuge. (It is beyond the scope of this discussion to describe the method of accomplishing this. Any of the several books available on CCC discuss it thoroughly.)

Functionally, the high-speed CCC consists of a helical coil of inert tubing which rotates on its planetary axis and simultaneously rotates eccentrically about another solar axis. (These axes can be made to coincide, but the most common or type J CCC is discussed here.) The effect is to create zones of mixing and zones of settling which progress along the helical coil at dizzying speed. This produces a highly favorable environment for chromatography.

There are numerous potential variants upon this instrument design. The most significant of these is the toroidal CCC. This instrument does not employ planetary motion. In some respects it is very like CPC, but retains the advantage of not needing rotary seals. It also employs a capillary tube instead of the larger-diameter tubes employed in the helices of the other CCC models. This capillary passage makes the mixing of two phases very thorough, despite the lack of shaking or other mixing forces. This instrument provides rapid analytical-scale separations, which can nonetheless be scaled up to either of the larger-scale CCC instruments.

Centrifugal Partition Chromatography (CPC) was invented in the eighties by the Japanese company Sanki Engineering Ltd, whose president was the late Kanichi Nunogaki. CPC has been extensively developed in France starting from the late nineties. CPC uses centrifugal force to speed separation and achieves higher flow rates than DCCC (which relies on gravity).

The centrifugal partition chromatograph is constituted with a unique rotor (=column). This rotor rotates on its central axis (while HSCCC column rotates on its planetary axis and simultaneously rotates eccentrically about another solar axis). With less vibrations and noise, the CPC offers a wider rotation speed range (from 500 to 2000 rpm) than HSCCC. That allows a better decantation and retention for unstable biphasic system (e.g., aqueous aqueous systems or Butanol/water systems).

Basics of CPC: The CPC rotor is constituted by the superposition of disks engraved with small cells connected by head / tail ducts. These cells, where the chromatographic separation takes place, can be compared to lined-up separate funnels. The rotor is filled with the stationary phase, which stays inside the rotor thanks to the rotation speed, while the mobile phase is pumped through. CPC can be operated in either descending or ascending mode, where the direction is relative to the force generated by the rotor rather than gravity. According to the fast and permanent evolution of the cells design, the efficiency and flow rate with low back pressure are improved. The CPC offers now the direct scale up from the analytical apparatuses (few milliliters) to industrial apparatuses (some liters) for fast batch production.