A chemist in the 1950s using column chromatography. The Erlenmeyer receptacles are on the floor.

Column chromatography in chemistry is a method used to purify individual chemical compounds from mixtures of compounds. It is often used for preparative applications on scales from micrograms up to kilograms.The main advantage of column chromatography is the relatively low cost and disposability of the stationary phase used in the process. The latter prevents cross-contamination and stationary phase degradation due to recycling.

The classical preparative chromatography column, is a glass tube with a diameter from 5 mm to 50 mm and a height of 5 cm to 1 m with a tap and some kind of a filter (a glass frit or glass wool plug – to prevent the loss of the stationary phase) at the bottom. Two methods are generally used to prepare a column: the dry method, and the wet method.

The individual components are retained by the stationary phase differently and separate from each other while they are running at different speeds through the column with the eluent. At the end of the column they elute one at a time. During the entire chromatography process the eluent is collected in a series of fractions. The composition of the eluent flow can be monitored and each fraction is analyzed for dissolved compounds, e.g. by analytical chromatography, UV absorption, or fluorescence. Colored compounds (or fluorescent compounds with the aid of an UV lamp) can be seen through the glass wall as moving bands.

Column chromatography proceeds by a series of steps.

The mobile phase or eluent is either a pure solvent or a mixture of different solvents. It is chosen so that the retention factor value of the compound of interest is roughly around 0.2 - 0.3 in order to minimize the time and the amount of eluent to run the chromatography. The eluent has also been chosen so that the different compounds can be separated effectively. The eluent is optimized in small scale pretests, often using thin layer chromatography (TLC) with the same stationary phase.

There is an optimum flow rate for each particular separation. A faster flow rate of the eluent minimizes the time required to run a column and thereby minimizes diffusion, resulting in a better separation. However, the maximum flow rate is limited because a finite time is required for analyte to equilibrate between stationary phase and mobile phase, see Van Deemter's equation. A simple laboratory column runs by gravity flow. The flow rate of such a column can be increased by extending the fresh eluent filled column above the top of the stationary phase or decreased by the tap controls. Faster flow rates can be achieved by using a pump or by using compressed gas (e.g. air, nitrogen, or argon) to push the solvent through the column (flash column chromatography).[2][3]

A spreadsheet that assists in the successful development of flash columns has been developed. The spreadsheet estimates the retention volume and band volume of analytes, the fraction numbers expected to contain each analyte, and the resolution between adjacent peaks. This information allows users to select optimal parameters for preparative-scale separations before the flash column itself is attempted.[5] 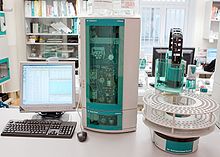 Column chromatography is an extremely time consuming stage in any lab and can quickly become the bottleneck for any process lab. Therefore, several manufacturers have developed automated flash chromatography systems (typically referred to as LPLC, low pressure liquid chromatography, around 50-75 psi) that minimize human involvement in the purification process. Automated systems will include components normally found on more expensive HPLC systems such as a gradient pump, sample injection ports, a UV detector and a fraction collector to collect the eluent. Typically these automated systems can separate samples from a few milligrams up to an industrial kg scale and offer a much cheaper and quicker solution to doing multiple injections on prep-HPLC systems.

The resolution (or the ability to separate a mixture) on an LPLC system will always be lower compared to HPLC, as the packing material in an HPLC column can be much smaller, typically only 5 micrometre thus increasing stationary phase surface area, increasing surface interactions and giving better separation. However, the use of this small packing media causes the high back pressure and is why it is termed high pressure liquid chromatography. The LPLC columns are typically packed with silica of around 50 micrometres, thus reducing back pressure and resolution, but it also removes the need for expensive high pressure pumps. Manufacturers are now starting to move into higher pressure flash chromatography systems and have termed these as medium pressure liquid chromatography (MPLC) systems which operate above 150 psi.

The software controlling an automated system will coordinate the components, allow a user to only collect the fractions that contain their target compound (assuming they are detectable on the system's detector) and help the user to find the resulting purified material within the fraction collector. The software will also save the resulting chromatograph from the process for archival and/or later recall purposes.

A representative example of column chromatography as part of an undergraduate laboratory exercise is the separation of three components (out of 28) in the oil of spearmint: carvone, limonene and dehydrocarveol.[6] A microscale setup consisting of a Pasteur pipette as column with silica gel stationary phase can suffice. The starting eluent is hexane and solvent polarity is increased during the process by adding ethyl acetate.

Typically, column chromatography is set up with peristaltic pumps, flowing buffers and the solution sample through the top of the column. The solutions and buffers pass through the column where a fraction collector at the end of the column setup collects the eluted samples. Prior to the fraction collection, the samples that are eluted from the column pass through a detector such as a spectrophotometer or mass spectrometer so that the concentration of the separated samples in the sample solution mixture can be determined.

For example, if you were to separate two different proteins with different binding capacities to the column from a solution sample, a good type of detector would be a spectrophotometer using a wavelength of 280 nm. The higher the concentration of protein that passes through the eluted solution through the column, the higher the absorbance of that wavelength.

The separate curves in the diagram represent different sample elution concentration profiles over time based on their affinity to the column resin. To calculate resolution, the retention time and curve width are required.

Retention Time: The time from the start of signal detection by the detector to the peak height of the elution concentration profile of each different sample.

Curve Width: The width of the concentration profile curve of the different samples in the chromatogram in units of time.

A simplified method of calculating chromatogram resolution is to use the plate model.[7] The plate model assumes that the column can be divided into a certain number of sections, or plates and the mass balance can be calculated for each individual plate. This approach approximates a typical chromatogram curve as a Gaussian distribution curve. By doing this, the curve width is estimated as 4 times the standard deviation of the curve, 4σ. The retention time is the time from the start of signal detection to the time of the peak height of the Gaussian curve.

From the variables in the figure above, the resolution, plate number, and plate height of the column plate model can be calculated using the equations:

For an adsorption column, the column resin (the stationary phase) is composed of microbeads. Even smaller particles such as proteins, carbohydrates, metal ions, or other chemical compounds are conjugated onto the microbeads. Each binding particle that is attached to the microbead can be assumed to bind in a 1:1 ratio with the solute sample sent through the column that needs to be purified or separated.

Using this as a basis, three different isotherms can be used to describe the binding dynamics of a column chromatography: linear, Langmuir, and Freundlich.

The linear isotherm occurs when the solute concentration needed to be purified is very small relative to the binding molecule. Thus, the equilibrium can be defined as:

For industrial scale uses, the total binding molecules on the column resin beads must be factored in because unoccupied sites must be taken into account. The Langmuir isotherm and Freundlich isotherm are useful in describing this equilibrium. Langmuir Isotherm:
[CS] = (KeqStot[C])/(1 + Keq[C]), where Stot is the total binding molecules on the beads.