Affinity chromatography is a method of separating biochemical mixtures and based on a highly specific interaction such as that between antigen and antibody, enzyme and substrate, or receptor and ligand.

Affinity chromatography can be used to:

The immobile phase is typically a gel matrix, often of agarose; a linear sugar molecule derived from algae.[1] Usually the starting point is an undefined heterogeneous group of molecules in solution, such as a cell lysate, growth medium or blood serum. The molecule of interest will have a well known and defined property which can be exploited during the affinity purification process. The process itself can be thought of as an entrapment, with the target molecule becoming trapped on a solid or stationary phase or medium. The other molecules in solution will not become trapped as they do not possess this property. The solid medium can then be removed from the mixture, washed and the target molecule released from the entrapment in a process known as elution. Possibly the most common use of affinity chromotography is for the purification of recombinant proteins. 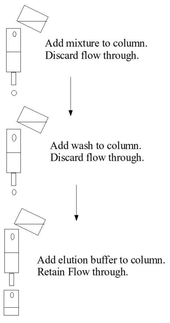 Binding to the solid phase may be achieved by column chromatography whereby the solid medium is packed onto a column, the initial mixture run through the column to allow setting, a wash buffer run through the column and the elution buffer subsequently applied to the column and collected. These steps are usually done at ambient pressure. Alternatively binding may be achieved using a batch treatment, by adding the initial mixture to the solid phase in a vessel, mixing, separating the solid phase (for example), removing the liquid phase, washing, re-centrifuging, adding the elution buffer, re-centrifuging and removing the eluate.

Sometimes a hybrid method is employed, the binding is done by the batch method, then the solid phase with the target molecule bound is packed onto a column and washing and elution are done on the column.

A third method,expanded bed adsorption, which combines the advantages of the two methods mentioned above, has also been developed. The solid phase particles are placed in a column where liquid phase is pumped in from the bottom and exits at the top. The gravity of the particles ensure that the solid phase does not exit the column with the liquid phase.

For thoroughness the GST protein and the GST-fusion protein can each be coupled separately. The serum is initially allowed to bind to the GST affinity matrix. This will remove antibodies against the GST part of the fusion protein. The serum is then separated from the solid support and allowed to bind to the GST-fusion protein matrix. This allows any antibodies that recognize the antigen to be captured on the solid support. Elution of the antibodies of interest is most often achieved using a low pH buffer such as glycine pH 2.8. The eluate is collected into a neutral tris or phosphate buffer, to neutralize the low pH elution buffer and halt any degradation of the antibody's activity. This is a nice example as affinity purification is used to purify the initial GST-fusion protein, to remove the undesirable anti-GST antibodies from the serum and to purify the target antibody.

Immobilized metal ion affinity chromatography (IMAC) is based on the specific coordinate covalent bond of amino acids, particularly histidine, to metals. This technique works by allowing proteins with an affinity for metal ions to be retained in a column containing immobilized metal ions, such as cobalt, nickel, copper for the purification of histidine containing proteins or peptides, iron,zinc or gallium for the purification of phosphorylated proteins or peptides. Many naturally occurring proteins do not have an affinity for metal ions, therefore recombinant DNA technology can be used to introduce such a protein tag into the relevant gene. Methods used to elute the protein of interest include changing the pH, or adding a competitive molecule, such as imidazole.

Possibly the most common use of affinity chromatography is for the purification of recombinant proteins. Proteins with a known affinity are protein tagged in order to aid their purification. The protein may have been genetically modified so as to allow it to be selected for affinity binding, this is known as a fusion protein. Tags include glutathione-S-transferase (GST), hexahistidine (His), and maltose binding protein (MBP). Histidine tags have an affinity for nickel or cobalt ions which are coordinate covalent bond with a chelator for the purposes of solid medium entrapment. For elution, an excess amount of a compound able to act as a metal ion ligand, such as imidazole, is used. GST has an affinity for glutathione which is commercially available immobilized as glutathione agarose. During elution, excess glutathione is used to displace the tagged protein.