Command of the sea

Command of the sea

A naval force has command of the sea when it is so strong that its rivals cannot attack it directly. Also called sea control, this dominance may apply to its surrounding waters (i.e., the littoral) or may extend far into the oceans, meaning the country has a blue-water navy. It is the naval equivalent of air superiority.

With command of the sea, a country (or alliance) can ensure that its own military and merchant ships can move around at will, while its rivals are forced either to stay in port or to try to evade it. It also enables free use of amphibious operations that can expand ground based strategic options. Most famously, the British Royal Navy held command of the sea for long periods from the 18th to the early 20th century, allowing Britain and its allies to trade and to move troops and supplies easily in wartime while its enemies could not (the importance of which is reflected in the famous British patriotic song, "Rule, Britannia!," which contains the exhortation, "Rule Britannia! Britannia rule the waves", even if this was not the poem's original subject). For example, Britain was able to blockade France during the Napoleonic Wars, the United States during the War of 1812, and Germany during World War I.

Few navies can operate as blue-water navies, but "many States are converting green-water navies to blue-water navies and this will increase military use of foreign Exclusive Economic Zones [littoral zone to 200 nautical miles (370 km)] with possible repercussions for the EEZ regime." [1]

Gradually, however, countries agreed that the open seas should be free to all shipping in peacetime and to neutral shipping in wartime. Great Britain accepted the principle in 1805; Russia, in 1824; and the United States (tacitly) in 1894. Many treaties, including the Treaty of Versailles, have dealt with the open seas, and currently the United Nations Convention on the Law of the Sea formalizes this freedom.

Historic command of the sea during the age of sail

Britannia rule the waves: decorated plate made in Liverpool circa 1793-1794.

Historically, many powers attempted to extend command of the sea into peacetime, imposing taxes or other restrictions on shipping using areas of open sea. For example, Venice claimed the Adriatic, and exacted a heavy toll from vessels navigating its northern waters. Genoa and France each claimed portions of the western Mediterranean. Denmark and Sweden claimed to share the Baltic between them. Spain claimed dominion over the Pacific and the Gulf of Mexico, and Portugal over the Indian Ocean and all the Atlantic south of Morocco (Hall, 148-9).

During the age of sail, there were two primary counter measures to another power holding control of the sea: smuggling, and privateering. Smuggling helped to ensure that a country could continue trading (and obtaining food and other vital supplies) even when under blockade, while privateering allowed the weaker power to disrupt the stronger power's trade. As these measures, which are examples of asymmetric warfare, came from non-governmental and sometimes criminal organizations, they fell into disfavor with stronger governments. An annex to the Treaty of Paris (1856) banned privateering. That treaty was an oddity in that it was ratified by relatively few countries, but quickly became the de facto law of the sea.

Historic command of the sea in the era of steam

A more modern countermeasure, similar to privateering, was the use of submarine warfare by Germany during World War I and World War II to attack allied merchant shipping primarily in the Atlantic Ocean, Mediterranean Sea, and Baltic Sea.

Historic command of the sea in the era of naval aviation

During World War II, aircraft also became an effective countermeasure to command of the sea, since ships could not defend themselves well against air attack. The Battle of Britain was largely an attempt by Germany to eliminate the Royal Air Force, so that it would not be able to defend the Royal Navy from air attack and even to allow a maritime invasion of Great Britain proper.

Modern command of the sea 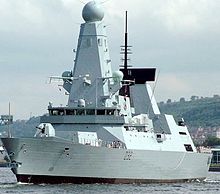 Advanced navies, with access to surveillance satellites and large-scale submarine detection systems, can rarely be surprised at sea, but cannot be everywhere. Individual ships of advanced navies can be vulnerable at sea (e.g., the USS Stark hit by an aircraft-delivered antiship missile while patrolling the Persian Gulf) or in port (e.g., by the suicide attack on the USS Cole.)

"Blue-water" (high seas) naval capability [2] means that a fleet is able to operate on the "high seas." While traditionally a distinction was made between the coastal brown-water navy (operating in the littoral zone to 200 nautical miles (370 km) and a seagoing blue-water navy, a new term, "green-water navy," has been created by the U.S. Navy[3], which refers to the coastal submarines and fast attack boats of many nations, the larger littoral combat corvettes and similar vessels of a substantial number of powers, and amphibious vessels ranging from elderly LSTs to complex S/VTOL carriers and other specialized ships.

The term brown-water navy appears to have been reduced, in U.S. Navy parlance, to a riverine force.

In modern warfare blue-water navy implies self-contained force protection from sub-surface, surface and airborne threats and a sustainable logistic reach, allowing a persistent presence at range. In some maritime environments such a defence is given by natural obstacles, such as the Arctic ice shelf.

During the Falklands War, the British lacked long-range Airborne Warning and Control System (AWACS), which led to ship losses and major damage to others, when the Argentinian attack aircraft came into the view of ship radar at approximately the same time they would fire antiship missiles, and only a short time before they made bombing attacks. A number of navies have learned this lesson. Navies with STOVL carriers have developed helicopter-mounted AWACS like the British and Spanish Westland Sea King AEW, Italian EH-101 AEW, and the Russian Ka-31 AEW helicopter. Recently the French with a new larger CATOBAR aircraft carrier obtained the US E-2 Hawkeye AWACS aircraft.

An example for the difference between a blue-water navy and a green-water navy: "...The first should be a 'green-water active defense' that would enable the People's Liberation Army Navy to protect China's territorial waters and enforce its sovereignty claims in the Taiwan Strait and the South China Sea. The second phase would be to develop a blue-water navy capable of projecting power into the western Pacific . . . Liu [commander in chief of the PLAN 1982-88 and vice chairman of the Central Military Commission 1989-97] believed that in order to fulfill a blue-water capability, the PLAN had to obtain aircraft carriers . . ." [2] Aircraft carriers are deployed with other specialized vessels in carrier battle groups, providing protection against sub-surface, surface and airborne threats.

As there is no clear definition of a blue-water navy, the status is disputed. Usually it is considered to be strongly linked to the maintenance of aircraft carriers capable of operating in the oceans. "In the early 80s there was a bitter and very public battle fought over whether or not to replace Australia's last aircraft carrier, HMAS Melbourne. Senior navy personnel warned without a carrier, Australia would be vulnerable to all types of threat. One ex-Chief of Navy went so far as to claim that we" (the Australians) "would no longer have a blue-water navy (one capable of operating away from friendly coasts)." [4]

While a blue-water navy can project sea control power into another nation's littoral, it remains susceptible to threats from less capable forces. Sustainment and logistics at range yield high costs and there may be a saturation advantage over a deployed force through the use of land-based air or surface-to-surface missile assets, diesel-electric submarines, or asymmetric tactics such as Fast Inshore Attack Craft. An example of this vulnerability was the October 2000 USS Cole bombing in Aden.[5][6][7]