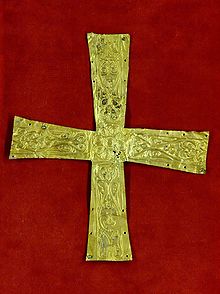 A pectoral cross or pectorale (from the Latin pectoralis, "of the chest") is a cross, usually relatively large, suspended from the neck by a cord or chain that reaches well down the chest. It is worn by the clergy as an indication of their position, and is different from the small crosses worn on necklaces by many Christians, which have no special significance. Most pectoral crosses are made of precious metals (platinum, gold or silver) and some contain precious or semi-precious gems. Some contain a corpus like a crucifix while others use stylized designs and religious symbols.

In many Christian denominations, it is a sign that the person wearing it is a member of the clergy and it may signify that the wearer is a member of the higher or senior clergy; however, in many Western churches there are an increasing number of laypeople who choose to wear some form of a cross around their neck.

While many Christians, both clergy and laity, wear crosses, the pectoral cross is distinguished by both its size (up to six inches across) and that it is worn in the center of the chest below the heart (as opposed to just below the collarbones).

Throughout the centuries, many pectoral crosses have been made in the form of reliquaries which contain alleged fragments of the True Cross or relics of saints. Some such reliquary pectorals are hinged so that they open to reveal the relic, or the relic may be visible from the front through glass.

One of the earliest mentions of a pectoral cross is its mention by Pope Hilarius in 461. In 811 Nicephorus sent Pope Leo III a golden pectoral cross.

The first Anglican bishop to wear a pectoral cross was Edward King of Lincoln (1885–1910). 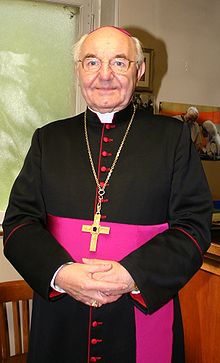 Archbishop Fernand Franck of Luxembourg wearing a gold pectoral cross on a chain.

In the Catholic Church a pectoral cross is one of the pontificals used by the pope, cardinals, archbishops and bishops. Various popes have extended this privilege to abbots, abbesses and some cathedral canons.

In choir dress—that is, when he wears a cassock, rochet and mozzetta—the pectoral cross is usually suspended by a cord of silk. This cord is green and gold for an archbishop or a bishop, and red and gold for a cardinal and gold for the pope. An abbot, abbess and canon would use a black silk cord. Formerly, protonotaries apostolic wore a pectoral cross on a purple silk cord when celebrating in pontificals. 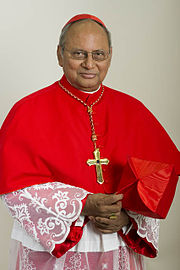 Bishops wear a pectoral cross during Mass suspended by the cord, though it is not visible. It is properly worn — with cord — over the alb, but under the chasuble. In practice most bishops wear their pectoral cross over their chasuble suspended either by a chain or a silk cord.

It is worn over the alb during liturgical functions. The prelate should kiss the cross before putting it on his neck, and while putting it on say the prayer Munire me digneris (the origin of which dates back to the Middle Ages), in which he petitions God for protection against his enemies, and begs to bear in mind continually the Passion of Jesus, and the triumphs of the confessors of the Faith.

The pontifical pectoral cross is distinct from the simple cross, the use of which is often permitted by the pope to members of cathedral chapters. Canons, to whom this privilege has been granted, are permitted to wear the cross at choir service only, and not over the alb at liturgical services, unless specially permitted.

The pectoral is the latest addition to episcopal ornaments. The custom, however, of wearing a cross on the breast either with or without holy relics, dates back to ancient time and was observed not only by bishops, but also by priests and lay people. The first mention made of the pectoral cross as a part of pontifical ornament is made by Innocent III, and its use as such only became customary toward the close of the Middle Ages. As an adornment for bishops we meet it the first time toward the end of the thirteenth century (Durandus), but at that time it was not generally worn by bishops. As Durandus says: "it was left to the discretion of the individual bishop to wear it or not". 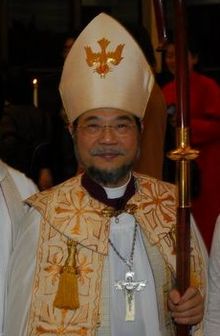 The widespread use of pectoral crosses has been revived in the Anglican Communion, and is usually limited to bishops. The pectorals worn by Anglican bishops do not normally have the corpus (body of Jesus) depicted on them. They may be decorated with amethyst[1] or a bishop's mitre, and are usually suspended from a simple gold chain. Anglo-Catholic bishops may follow more of the Roman Catholic model.

Other Anglican clergy occasionally wear crosses around their necks, but their appearance and form are generally more modest so as not to confuse them with bishops (who also generally wear purple, palatinate, or amaranth magenta shirts).

At their meeting in The Vatican on 21 November 2009 to resolve tensions over an offer for disaffected Anglicans to convert to Rome, the Pope gave the Archbishop of Canterbury a pectoral Cross. Some[who?] thought that this was an indication that he recognised the Archbishop's episcopacy — in spite of a 19th-century papal bull under which Anglican orders are deemed “absolutely null and utterly void”.

In recent years, Protestant churches have returned to more traditional ceremonial dress from either the Catholic, Orthodox or Anglican tradition. Pectoral crosses are worn by clergy in many denominations, mainly Lutheranism, by a bishop, or by a pastor or occasionally by choristers and/or liturgical assistants in other denominations. Generally speaking, only prelates will wear a gold cross suspended with a chain when wearing ceremonial garments or when wearing a suit, in one's left pocket over the heart. Clergy who are not bishops usually wear a silver cross suspended by a cord (usually black). In some denominations the colour of the cord refers to a specific position held in that denomination. 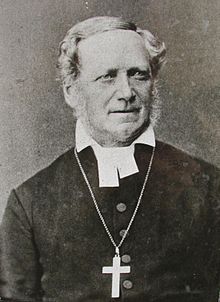 The bishop of Strängnäs Thure Annerstedt wearing a pectoral cross of the model used in the Church of Sweden.

In the Church of Sweden, pectoral crosses were reintroduced for bishops in 1805 by king Gustav IV Adolf. The model of 1805 is still in use today. Bishops wear a simple latin cross of gold suspended by a gold chain. The archbishop of Uppsala uses the same model with the addition of golden rays in the angles of the cross. 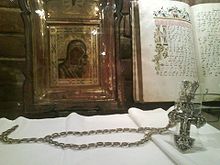 In Orthodox practice, the pectoral cross is worn by all bishops, but not necessarily by all priests. In the Greek tradition, the pectoral cross is only given to specific priests for faithful service; in the Russian tradition, the silver cross is worn by all priests. Whenever the cross is put on, the wearer first uses it to make the Sign of the Cross on himself and then kisses it and puts it on.

The priest's cross depicts the crucified Christ, whether in painted form as an icon, or in relief. However, the Orthodox crucifix differs from the Western type by the fact that the soma (body of Christ) is not in full three-dimensional form, but in no more than three-quarter relief. It also bears the inscription INBI (the titulus that Pontius Pilate placed above the head of Jesus at the crucifixion) and the letters IC XC NIKA around the four arms of the cross. Orthodox pectoral crosses are almost always on chains of either silver or gold, sometimes with intricately worked links. Priest's crosses will often have an icon of Christ "Made Without Hands" at the top. This is the icon before which Orthodox Christians usually confess their sins. In Russian practice, the back of a priest's cross is usually inscribed with St. Paul's words to St. Timothy: "Be an example to the believers in speech and conduct, in love, in faith, in purity" (1 Tim. 4:12).

Orthodox pectoral crosses are awarded in several degrees (particularly in the Russian tradition):

When vesting before celebrating the Divine Liturgy, the pectoral cross is presented to the bishop who will bless the pectoral, cross himself with it, kiss the cross and put it on. Meanwhile the Protodeacon, swinging the censer says the following prayer:

He who would be my disciple, let him deny himself, take up his cross and follow me (Matthew 16:24, etc.); always, now and ever, and unto the ages of ages. Amen.

A priest may be granted the right to wear a second pectoral cross.

A priest who has been given the pectoral cross will typically wear it at all times, whether vested or not.

In Russian practice, a nun who is not an abbess may also be granted the privilege of wearing a pectoral cross, as an honorary award (however, this award is not granted to monks who are not priests).

The pectoral cross worn by Coptic bishops and abbots is sometimes made from intricately worked leather, though metal pectorals are also used.