Delta is a city in Millard County, Utah, United States. The population was 3,209 at the 2000 census.

According to the United States Census Bureau, the city has a total area of 3.2 square miles (8.2 km2), all of it land.

DMAD are the initials for the Deseret Melville Abraham and Delta water company.

Just upstream of Delta, the Sevier River is dammed to provide irrigation water, reservoir storage, and cooling water for IPP, Intermountain Power Project. This reservoir is referred to as the DMAD.

Agriculture is a major economic force in Delta and the Sevier valley.

Downstream of Delta, the Sevier River is dammed again for irrigation and reservoir storage. This reservoir is named Gunnison Bend Reservoir, in honor of John Williams Gunnison. 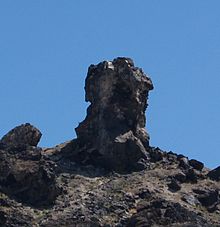 One of the great icons of Delta is 'The Great Stone Face', which is a rock when viewed in profile appears Joseph Smith's face.[4]

Notch Peak is located about 50 miles to the west of Delta. The skyline appears to have a notch taken out of it when viewed from Delta.

Notch Peak as seen from the south on the valley floor. 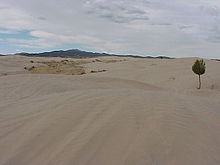 Little Sahara is about 25 miles North of Delta. It is a very popular area for ATV riders. For more information, see Little Sahara Recreation Area. 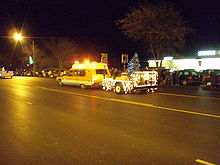 There were 1,006 households out of which 48.6% had children under the age of 18 living with them, 65.3% were married couples living together, 9.0% had a female householder with no husband present, and 22.4% were non-families. 20.8% of all households were made up of individuals and 10.2% had someone living alone who was 65 years of age or older. The average household size was 3.15 and the average family size was 3.71. Intermountain Power Project as seen from the air, 2008

Brush Wellman is a mine and refining plant located at one of the few sources of concentrated beryllium in the world. The plant is a mill and finishing facility for beryllium, a high-strength, lightweight metal used in military, aerospace, and medical industries. The ore for the plant comes from Brush Wellman's mine, located in the Topaz-Spor Mountains, 50 miles west, which is North America's only developed source for the metal. The facility is located here due to the remoteness of the area, as beryllium dust is highly toxic, and the proximity of a large source of power: the Intermountain Power Project.

Graymont Lime has a plant in the Cricket Mountains, about 35 miles southwest of Delta. It is one of the 10 largest lime plants in the United States. It was previously owned by Continental Lime which was purchased by Graymont Lime. For more information, see Graymont's website.

Alfalfa hay is the main crop of the Delta area. Because of Delta's dry climate, the farmers are able to control the alfalfa hay's moisture when it is baled. This is very important to prohibit mold growth.

Delta is home to many dairy farmers who may ship the milk out of the county, or may ship it to the local cheese factory (Red Rock Specialty Cheese).

Delta is home to the Lon and Mary Watson Cosmic Ray Center, the main staging area for the Telescope Array experiment.[5]

A great attraction of Millard County's economy is the digging of fossils. Trilobite fossils are relatively common in the region west of Delta (part of the House Range's Wheeler Shale). A number of local companies maintain fossil dig areas where they allow visitors to dig their own fossils for a small fee.

Near Delta is a mountain called Topaz Mountain which derives its name from the Topaz that is abundant in the area. Other minerals and rocks that are prevalent near Delta include Obsidian, Opal, and geode.

Settlement of Delta began in 1907 on townlots that had been laid out in 1906.[6] The town was originally called Burtner.

After the attack on Pearl Harbor, many Japanese-Americans were gathered up and placed in concentration camps with the intention of protecting military installations from espionage. One of these camps was located near Delta. For more information see Topaz War Relocation Center. Two markers at the Gunnison site, 2008

John Williams Gunnison was leading a federal surveying team near the Sevier Lake. He was ambushed by the Pahvant Indians and killed.

The Snow goose Festival occurs every winter as the geese migrating through Delta stop at Gunnison Bend Reservoir. For more information on the Snow Goose Festival, see http://www.deltagoosefestival.info/

Each 4 July the Hinckley Lions Club sponsors a demolition derby at the Millard County Fairgrounds. The derby attracts an extraordinarily large crowd in excess of 3,000 people. It is one of the largest derbies in the United States with up to eleven rounds of competition including pickup trucks, figure 8 compact car competition, powder puff, a championship round and a wipe out round. Following the derby, there is a fireworks display sponsored by Delta City.

Days of the Old West Rodeo