Chuo University (中央大学, Chūō Daigaku?), literally Central University, is a private university in Tokyo, renowned for its law school. Chuo is one of the most prestigious schools in Japan. The University has four campuses at Tama (Hachiōji), at Korakuen, at Ichigaya (Shinjuku), and at Ichiaya-Tamachi (Shinjuku). Chuo University has six faculties, ten graduate schools, and nine research institutes. It also operates four high schools and two junior high schools.

Chuo was founded as the English Law School (英吉利法律学校, Igirisu Hōritsu Gakkō?) in 1885 at Kanda in Tokyo by a group of lawyers. By 1889, the school had moved and been renamed Tokyo College of Law (Tokyo Hōgakuin). The curriculum was changed to reflect the government reform of Japanese law and creation of a new civil code. Opposition to the implementation of the new civil code resulted in the government shuttering of the campus journal and the subsequent creation of the Chuo Law Review (Hōgaku Shinpo), which has since been published regularly.

The university burned down in the Great Kanda Fire of 1892, but was able to hold temporary classes. By 1903, the school had been promoted to Tokyo University of Law (Tokyo Hōgakuin Daigaku) and in 1905 the school expanded with a department of economics, renaming itself Chuo University.

The origin of its name "Chuo" has not been certain. However, many of founders were graduated from Middle Temple, London, England and qualified as Barrister in England. This is one of the reasons why the university renamed "Chuo", literally Middle, Center, or Central.

Another fire torched the campus in June 1917, but it was rebuilt by August 1918.

The 1923 Great Kantō earthquake again reduced the campus to rubble and it was rebuilt, moving to Kanda-Surugadai in 1926.

In 1944, Engineering College was established.

In 1978, Chuo University's headquarters, four faculties and graduate schools including law, economics, commerce, and letters moved to newly established Tama Campus in Hachiōji from Kanda-Suguradai Campus. Faculty of Science and Engineering and its Graduate School remained in Korakuen Campus. For celebrating its 100th anniversary, in 1988, Chuo University built Surugadai Memorial Hall which is a seven-story building. It is located in a part of old Kanda-Surugadai Campus.

In 1993, Faculty of Policy Studies was opened in Tama Campus.

In 2008, Chuo Graduate School of Strategic Management which is a professional graduate school was launched at Korakuen Campus.

Ichigaya-Tamachi Campus in Shinjuku was opened in 2010. CGSA and the Graduate School of Public Policy have moved to this campus.

In 2010, Chuo University celebrated its 125th anniversary. A series of events including the main ceremony on November 13 were held. 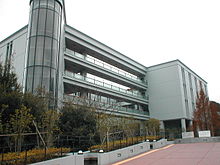 The main campus in Tama

It is a short walk from the Chūō-Daigaku-Meisei-Daigaku Station of the Tama Monorail, which is reachable from the city on the JR Chūō Line, the Keiō Line, and the Odakyū Line.

There are (1) headquarter, (2) all faculties except the Faculties of Science and Engineering, (3) five graduate schools including law, economics, commerce, letters, and policy studies.

There are the Faculty of Science and Engineering and its graduate school, and the Chuo Graduate School of Strategic Management (professional graduate school).

There is the Chuo Law School (professional graduate school).

It is located in Chiyoda ward, Tokyo. It can be reached from Ochanomizu Station (JR Chūō-Sōbu Line, and Marunouchi subway line).

Chuo University is a one of the Japanese leading universities. Thus it is competitive in several rankings such as shown below.

The university has been ranked 27th, 25th, 34th during 2008-2010 respectively in the ranking "Truly Strong Universities(本当に強い大学)" by Toyo Keizai.[1]

Chuo has filed the 67 th highest number of patents in the nation as its research outcomes.[10]

Chuo Law School is considered as one of the top Japanese law schools. In fact, Chuo's number of successful candidates for bar examination has been 2nd in 2009-2010 in Japan.[11] It is the strongest department in this university as the cumulative number of people qualified as lawyer and prosecutor has been historically 2nd after WW2.[12]

The graduate from Chuo enjoy a good success in the Japanese industries.

According to the Weekly Economist's 2010 rankings, graduates from Chuo University have the 36th best employment rate in 400 major companies[13]

École des Mines de Paris ranks Chuo University as 25th in the world in 2011 in terms of the number of alumni listed among CEOs in the 500 largest worldwide companies.[6] The university is also ranked 4th in Japan for the number of alumni holding the position of executive in the listed companies of Japan, and this number per student (probability of becoming an executive) is 14th.[14][15]

Chuo graduates have been ranked 3rd in Japan in the number of successful national CPA exam applicants.[9] Furthermore, the number of Members of Parliament who graduated Chuo is 7th in Japan.[16]

Nikkei BP has been publishing a ranking system called "Brand rankings of Japanese universities" every year, composed by the various indications related to the power of brand, and Chuo was 10th in 2009 in Greater Tokyo Area.[21][3]