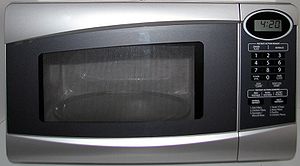 A microwave oven, which uses dielectric heating to cook food

Dielectric heating, also known as electronic heating, RF heating, high-frequency heating and diathermy, is the process in which a high-frequency alternating electric field, or radio wave or microwave electromagnetic radiation heats a dielectric material. At higher frequencies, this heating is caused by molecular dipole rotation within the dielectric. At lower frequencies in conductive fluids, other mechanisms such as ion-drag are more important in generating thermal energy.

RF dielectric heating at intermediate frequencies, due to its greater penetration over microwave heating, shows greater promise than microwave systems as a method of very rapidly heating and uniformly preparing certain food items, and also killing parasites and pests in certain harvested crops.

Molecular rotation occurs in materials containing polar molecules having an electrical dipole moment, which will align themselves in an electromagnetic field. If the field is oscillating, as it is in an electromagnetic wave or in a rapidly-oscillating electric field, these molecules rotate to continuously align with it. This is called dipole rotation. As the field alternates, the molecules reverse direction. Rotating molecules push, pull, and collide with other molecules (through electrical forces), distributing the energy to adjacent molecules and atoms in the material. Once distributed, this energy appears as heat.

Dipole rotation is the mechanism normally referred to as dielectric heating, and is most widely observable in the microwave oven where it operates most efficiently on liquid water, and much less so on fats and sugars. This is caused by fats and sugars being far less polar than water molecules, and thus less affected by the forces generated by the alternating electromagnetic fields. Outside of cooking, the effect can be used generally to heat solids, liquids, or gases, provided they contain some electric dipoles.

Frequencies in the range of 10-100 MHz are necessary to perform dielectric heating with good efficiency, although higher frequences work equally well or better, and in some materials (especially liquids) lower frequencies also have significant heating effects, often due to more unusual mechanisms. For example, in conductive liquids such as salt-water, "ion-drag" causes heating, as charged ions are "dragged" more slowly back and forth in the liquid under influence of the electric field, striking liquid molecules in the process and generating kinetic energy in them, which will be eventually translated into molecular vibrations and thus into thermal energy.

Dielectric heating at low frequencies must occur within inside a capacitative enclosure, and thus it is a contact process or near-contact process, since it usually sandwiches the material to be heated (usually a non-metal) between metal plates that set up the electric field and thus form what is effectively a very large capacitor with the material to be heated acting as the dielectric in the capacitor. However, actual electrical contact is not necessary for heating of a dielectric inside a capacitor, as the electric fields that form inside a capacitor subjected to a voltage do not require electrical contact of the capacitor plates with the dielectric (non-conducting) material between the plates. Because lower frequency electrical fields penetrate nonconductive materials far more deeply than do microwaves, heating pockets of water and organisms deep inside dry materials like wood, it can be used to rapidly heat and prepare many non-electrically conducting food and agricultural items, so long as they fit between the capacitor plates.

At very high frequencies, the wavelength of the electromagnetic field changes begins to be far shorter than the distance between the metal walls of the heating cavity, or the dimensions of the walls themselves. This is the case inside a microwave oven. In such cases, conventional far-field electromagnetic waves form and are absorbed to cause heating, but the dipole-rotation mechanism of heat deposition remains the same. However, microwaves are not efficient at causing the heating effects of low frequency fields that depend on slower molecular motion, such as those caused by ion-drag.

Dielectric heating must be distinguished from Joule heating of conductive media, which is caused by induced electric currents in the media. If conductivity is poor, or the frequency is high, such that

Communication microwave frequencies penetrate conductive materials, including semi-solid substances like meat and living tissue, to a distance defined by the skin effect. The penetration stops essentially where all of the penetrating microwave energy has been absorbed as (i.e. converted to) heat in the tissue. For this reason, it may be dangerous to stand close to high-power microwave antennas such as those used for broadcasting over long distances (tens of miles); a person in proximity to such antennas may experience severe penetrating burns, which (in the worst cases) may include serious burn injury to internal organs.

Use of RF frequency electric fields in dielectric heating

The use of high-frequency electric fields for heating dielectric materials had been proposed in the 1930s, for example US patent 2,147,689 (application by Bell Telephone Laboratories, dated 1937) states "This invention relates to heating systems for dielectric materials and the object of the invention is to heat such materials uniformly and substantially simultaneously throughout their mass. ... It has been proposed therefore to heat such materials simultaneously throughout their mass by means of the dielectric loss produced in them when they are subjected to a high voltage, high frequency field." The modern microwave oven makes use of microwave frequency electric fields for highly efficient dielectric heating.

In agriculture, RF dielectric heating has been widely tested and increasingly is used as a way to kill pests in certain food crops after harvest, such as walnuts still in the shell. Because of uniformity of heating in foods, even more so with RF than with microwave heating, RF heating holds promise as a way to process foods quickly. [1]

In the natural sciences, the term diathermy means "electrically induced heat" and is commonly used for muscle relaxation. It is also a method of heating tissue electromagnetically or ultrasonically for therapeutic purposes in medicine.[2] In surgery, it is used as a method of electrocauterization, for example in controlling bleeding or cutting through tissues.[3]

Electric diathermy (not to be confused with Therapeutic ultrasound which may be called diathermy but does not use dielectric heating) uses high frequency alternating electric or magnetic fields, sometimes with no electrode or device contact to the skin, to induce gentle deep tissue heating by induction or dipole rotation. If precautions are followed no tissue is ordinarily damaged. It is generally used in physical therapy biomedical applications.[4]

Microwave heating is a sub-category of dielectric heating at frequencies above 100 MHz, where an electromagnetic wave can be launched from a small dimension emitter and conveyed through space to the target. Although a capacitor-like set of plates can be used, they are not necessary, since the microwaves are already present as far field type EM radiation, and their absorption does not require proximity to an antenna. The material to be heated (a non-metal) can therefore be simply placed in the path of the waves, and heating takes place, in a non-contact process which does not require capacitative conductive plates. Typical domestic microwave ovens operate at 2.45 GHz, but 0.915 GHz ovens also exist.