Mesoamerican pyramids, pyramid-shaped structures, are an important part of ancient Mesoamerican architecture. These structures were usually step pyramids with temples on top – more akin to the ziggurats of Mesopotamia than to the pyramids of Ancient Egypt. The Mesoamerican region's largest pyramid by volume – indeed, the largest in the world by volume – is the Great Pyramid of Cholula, in the Mexican state of Puebla. 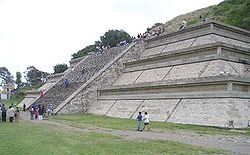 The Aztecs, a people with a rich mythology and cultural heritage, dominated central Mexico in the 14th, 15th and 16th centuries.[1] Their capital was Tenochtitlan on the shore of Lake Texcoco – the site of modern-day Mexico City. They were related to the preceding cultures in the basin of Mexico such as the culture of Teotihuacan whose building style they adopted and adapted. 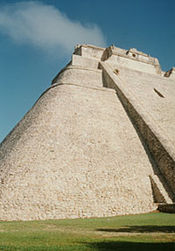 The Maya are a people of southern Mexico and northern Central America (Guatemala, Belize, western Honduras, and extreme northern El Salvador) with some 3,000 years of history. Archaeological evidence shows the Maya started to build ceremonial architecture approximately 3,000 years ago. The earliest monuments consisted of simple burial mounds, the precursors to the spectacular stepped pyramids from the Terminal Pre-classic period and beyond. These pyramids relied on intricate carved stone in order to create a stair-stepped design. Many of these structures featured a top platform upon which a smaller dedicatory building was constructed, associated with a particular Maya deity. Maya pyramid-like structures were also erected to serve as a place of interment for powerful rulers. Maya pyramidal structures occur in a great variety of forms and functions, bounded by regional and periodical differences.

The Tarascan state was a precolumbian culture located in the modern day Mexican state of Michoacán. The region is currently inhabited by the modern descendents of the P'urhépecha. Tarascan architecture is noted for "T"-shaped step pyramids known as yácatas.

Pyramid of the Sun

The Teotihuacan civilization, which flourished from around 300 BCE to 500 CE, at its greatest extent included most of Mesoamerica. Teotihuacano culture collapsed around 550 and was followed by several large city-states such as Xochicalco (whose inhabitants were probably of Matlatzinca ethnicity), Cholula (whose inhabitants were probably Oto-Manguean), and later the ceremonial site of Tula (which has traditionally been claimed to have been built by Toltecs but which now is thought to have been founded by the Huastec culture).

The best known Classic Veracruz pyramid, the Pyramid of Niches in El Tajín, is smaller than those of their neighbours and successors but more intricate.

The Zapotecs were one of the earliest Mesoamerican cultures and held sway over the Valley of Oaxaca region from the early first millennium BCE to about the 14th century.

The following sites are from northern Mesoamerica, built by cultures whose ethnic affiliations are unknown: 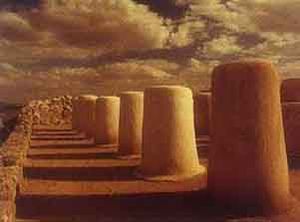 This astronomical and ceremonial center was the product of the Chalchihuite culture. Its occupation and development had a period of approximately 800 years (ca. 200—1000). This zone is considered an important archaeological center because of the astonishing, accurate functions of the edifications. The ones that stand out the most are: The Moon Plaza, The Votive Pyramid, the Ladder of Gamio and The labyrinth. In The Labyrinth you can appreciate with precision and accuracy, the respective equinoxes and the seasons.

A great quantity of buildings were constructed on artificial terraces upon the slopes of a hill. The materials used here include stone slab and clay. The most important structures are: The Hall of Columns, The Ball Court, The Votive Pyramid, and The Palace and the Barracks. On the most elevated part of the hill is The Fortress. This is composed of a small pyramid and a platform, encircled by a wall that is more than 800m long and up to six feet high. La Quemada was occupied from 800 to 1200. Their founders and occupants have not been identified with certainty but probably belonged to either the Chalchihuites culture or that of the neighbouring Malpaso culture.[2]