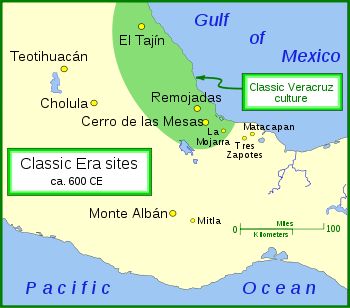 The Classic Veracruz culture and other important Classic Era settlements. 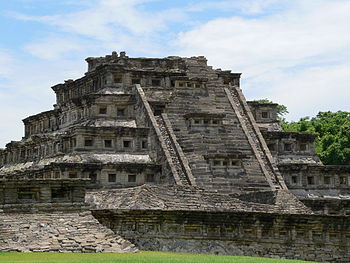 The Pyramid of the Niches, El Tajin. 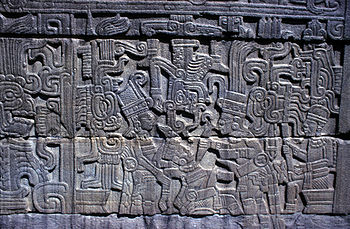 One of a series of murals from the South Ballcourt at El Tajin, showing the sacrifice of a ballplayer. 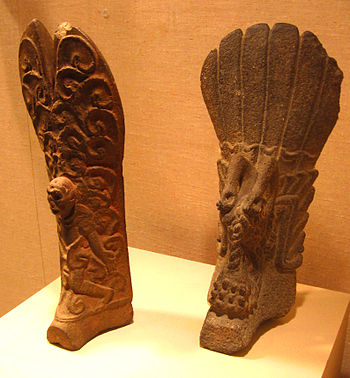 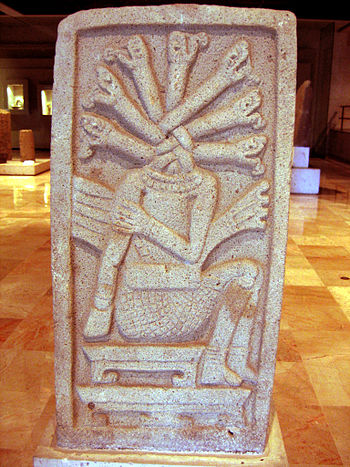 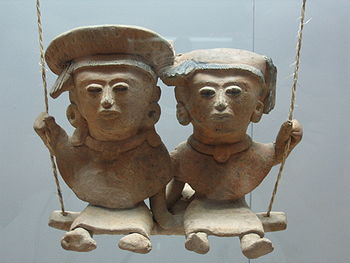 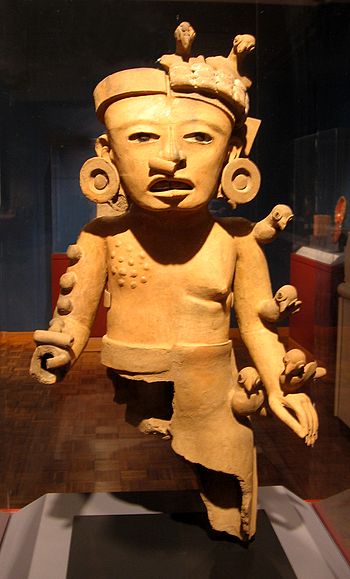 A large male/female duality figurine from Remojadas. Note the feminine breast and birds on the right sideof the figure.

Classic Veracruz culture (or Gulf Coast Classic culture) refers to a cultural area in the north and central areas of the present-day Mexican state of Veracruz, a culture that existed from roughly 100 to 1000 CE, or during the Classic era.[1]

El Tajin was the major center of Classic Veracruz culture; other notable settlements include Higueras, Zapotal, Cerro de las Mesas, Nopiloa, and Remojadas, the latter two important ceramics centers. The culture spanned the Gulf Coast between the Pánuco River on the north and the Papaloapan River on the south.

The major theme of Classic Veracruz art is human sacrifice, particularly in context of the Mesoamerican ballgame.[2] This art is rendered with extensive and convoluted banded scrolls that can be seen both on monumental architecture and on portable art, including ceramics and even carved bones. At least one researcher has suggested that the heads and other features formed by the scrolls are a Classic Veracruz form of pictographic writing.[3] This scrollwork may have grown out of similar styles found in Chiapa de Corzo and Kaminaljuyu.[4]

In addition to the scrollwork, the architecture is known for its ornate ornamentation, such as that seen on the Pyramid of Niches at El Tajin. This ornamentation produces dramatic contrasts of light and shadow, what art historian George Kubler called a "bold chiaroscuro".[5]

While Classic Veracruz culture shows influences from Teotihuacan and the Maya,[6] neither of these cultures are its direct antecedents. Instead, the seeds of this culture seems to have come at least in part from the Epi-Olmec culture centers, such as Cerro de las Mesas and La Mojarra.[7]

The Classic Veracruz culture is sometimes wrongly associated with the Totonacs, who were occupying this territory at the time of the Spanish Conquest of Mexico. However, there is little or no evidence that the Totonacs were the originators of the Classic era culture.[8]

Burials, monumental sculpture, relief carvings, and the distribution of architecture within the regional centers all point to a stratification of Classic Veracruz society, including the presence of an elite rank as well as craft specialization. Elite hereditary rulers held sway over these small- to medium-sized regional centers, none over 2000 km², maintaining their rule through political and religious control of far-flung trade networks and legitimizing it through typical Mesoamerican rites such as bloodletting, human sacrifice, warfare, and use of exotic goods.[9] Much or most of the population, however, lived in isolated homesteads, hamlets, or villages.[10]

Like the Epi-Olmec and Olmec cultures before it, Classic Veracruz culture was based on swidden, or slash-and-burn, agriculture, with maize an important component of the diet, supplemented with domestic dog, wild deer and other mammals, and fish and shellfish. Cotton was also an important crop.[11]

The Classic Veracruz culture venerated many common Mesoamerican deities, in particular a death god (very prominent at El Tajin and often associated with the Aztec Mictlantecuhtli) and an earth monster (likely inherited from the Olmec culture).[12]

The Classic Veracruz culture was seemingly obsessed with the ballgame.[13] Every cultural center had at least one ballcourt, while up to 18 ballcourts have been found at El Tajin.[14] It was during Late Classic here in north-central Veracruz that the ballgame reached its height.[15]

The ballgame rituals appear throughout Classic Veracruz monumental art. The walls of largest ballcourt, the South Ballcourt at El Tajin are lined with carved murals showing human sacrifice in the context of the ballgame (see photo above). The culmination of these murals is a tableau showing the rain god, who pierces his penis (an act of bloodletting) to replenish a vat of the alcoholic, ritual drink pulque, the apparent desired end result of the ballgame ritual sacrifice.[16]

A defining characteristic of the Classic Veracruz culture is the presence of stone ballgame gear: yokes, hachas, and palmas. Yokes are U-shaped stones worn about the waist of a ballplayer, while the hachas and palmas sit upon the yoke. Archaeologists generally suppose that the stone yokes are ritual versions of leather, cotton, and/or wood yokes, although no such perishable artifacts have yet been unearthed. While the yokes and hachas have been found from Teotihuacan to Guatemala, the palmas seem peculiar to what is today northern Veracruz.

Until the early 1950s, the Classic Veracruz ceramics were few, little understood, and generally without provenance. Since then, the recovery of thousands of figurines and pottery pieces from sites such as Remojadas, Los Cerros, Dicha Tuerta, and Tenenexpan, some initially by looters, has expanded our understanding and filled many museum shelves.[17] Artist and art historian Miguel Covarrubias described Classic Veracruz ceramics as "powerful and expressive, endowed with a charm and sensibility unprecedented in other, more formal cultures".[18]

Remojadas style figurines, perhaps the most easily recognizable, are usually hand-modeled, and often adorned with appliqués. Of particular note are the Sonrientes (smiling faces) figurines, with triangular-shaped heads and outstretched arms. Nopiloa figurines are usually less ornate, without appliqués, and often molded.[19]

The Classic Veracruz culture produced some of the few wheeled Mesoamerican figurines and is also noted for the use of bitumen for highlighting.