Sakhalin-2 includes the first liquefied natural gas plant in Russia. Therefore, the project is of vital importance to Russia's energy policy. This was seen as a reason why the foreign owners of the development were forced to sell a majority stake in the project to Russian gas company Gazprom.[1] The development is situated in areas previously little touched by human activity, causing various groups to criticize the development activities and the impact they have on the local environment.[1]

The first ever Russian production sharing agreement was signed in the framework of the Sakhalin-2 project in 1994. Production began from the Molikpaq platform in the Piltun-Astokhskoye field in July 1999, and in September 1999 the first crude oil was exported.[citation needed]

The consortium Sakhalin Energy had a contract to produce gas without a local partner. However, in 2005–2006 the consortium was heavily criticized due to environmental issues and the legal proceeding on violation of the Russian environmental regulations were initiated.[2] Under legal and political pressure, the consortium was forced to sell a majority stake to Gazprom. On 21 December 2006, Gazprom took control over a 50%-plus-one-share stake in the project by signing an agreement with Royal Dutch Shell. Russian President Vladimir Putin attended the signing ceremony in Moscow and indicated that environmental issues had been resolved.[1][3]

The LNG plant was inaugurated on 18 February 2009. The first cargo was loaded to the LNG carrier Grand Aniva at the end of March 2009.[4]

The two fields contain an estimated 1,200 million barrels (190×10^6 m3) of crude oil and 500 billion cubic meters (18 trillion cubic feet) of natural gas; 9.6 million tonnes of liquefied natural gas per year and about 180,000 barrels per day (29,000 m3/d) of oil will be produced.[5] The total project cost until 2014 was originally estimated by Royal Dutch Shell to be between US$9 and $11 billion. However, the costs turned out to be substantially underestimated and in July 2005 Shell revised the estimate upwards to $20 billion.[citation needed]

The Molikpaq drilling and oil production platform (Piltun-Astokhskoye-A platform) is an ice-resistant structure, originally built to explore for oil in the Canadian Beaufort Sea. It had been mothballed in 1990, and was installed in the Astokh area of the Piltun-Astokhskoye field, 16 kilometres (9.9 mi) offshore, on September 1998.[6] The Molikpaq has production capacity of 90,000 barrels per day (14,000 m3/d) of oil and 1.7 million cubic meters of associated gas. [2] 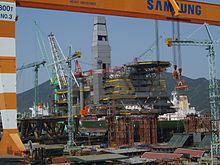 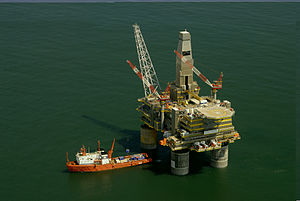 The onshore processing facility is located in the north-east of Sakhalin Island, 7 kilometres (4.3 mi) inland in Nogliki district. It is designed to process natural gas, condensate, and oil from the Lunskoye and the Piltun-Astokhskoye fields prior to pipeline transportation to the oil export terminal and the liquefied natural gas plant in Aniva Bay in the south of Sakhalin Island.[9]

The TransSakhalin pipeline system is designed for transportation of hydrocarbons from the Piltun-Astokhskoye and Lunskoye fields in the North of Sakhalin Island to the onshore processing facility in the Nogliki district and to the LNG plant and the oil export terminal in Aniva Bay.[10]

The oil export terminal is located in Aniva Bay to the east of the LNG plant. It includes the export pipeline and the tanker loading unit, where oil-loading to tankers is performed.[11]

The Sakhalin-2 LNG plant is the first of its kind in Russia. It is located in Prigorodnoye in Aniva Bay, 13 kilometres (8.1 mi) east of Korsakov. Construction of the LNG plant was carried out by OAO Nipigaspererabothka (Nipigas) and the KhimEnergo consortium, together with two Japanese companies Chiyoda Corporation and Toyo Engineering Corporation.[citation needed] The plant has been designed to prevent major loss of containment in the event of an earthquake and to ensure the structural integrity of critical elements such as emergency shut down valves and the control room of the plant.[citation needed]

The LNG plant production capacity is 9.6 million tons of LNG per year. The consortium is examining the possibility of adding another train.[12] A special gas liquefaction process was developed by Shell for use in cold climates such as Sakhalin, based on the use of a double mixed refrigerant.[citation needed]

The LNG plant has two LNG double-walled, storage tanks with a capacity of 100,000 cubic metres (3,500,000 cu ft) each. LNG is exported via an 805 metres (2,641 ft) jetty in Aniva Bay. The jetty is fitted with four arms – two loading arms, one dual purpose arm and one vapour return arm. The upper deck is designed for a road bed and electric cables. The lower deck is used for the LNG pipeline, communication lines and a footpath. LNG is pumped from the storage tanks into the parallel loading lines which are brought to the LNG jetty. At the jetty head, the pipelines are connected with the jetty's four loading arms. The water depth at the tail of the jetty is 14 metres (46 ft). The jetty will service LNG tankers which have capacities of between 18,000 and 145,000 cubic metres (640,000 and 5,100,000 cu ft). Loading operations are estimated to take from six to 16 hours, depending on vessel capacity. The jetty will be able to handle loading of around 160 LNG carriers per year.[citation needed]

Contracts for the supply of LNG have been signed with:

Sakhalin Energy looked for finances from the European Bank for Reconstruction and Development. However, on 11 January 2007 EBRD withdrew its consideration of financing for Sakhalin-2, claiming that Gazprom's acquisition of the controlling stake of Sakhalin-2 resulted in a to the project making it is unfeasible for the EBRD to pursue the current project.[14] Meanwhile, environmental organizations contend that Sakhalin II had "chronically and substantially violated EBRD's environmental policy".[15][16]

The consortium applied for nearly a billion dollars in financing from the public export credit agencies of the United States and the United Kingdom, but in early March 2008 these applications were withdrawn due to the drawn-out and uncertain decision making process] by these banks.[17] However, environmental groups contend that the drawn-out process was due to the fact that the company failed to demonstrate compliance with these public banks' environmental policies.[18]

In July 2005, a Russian court upheld the appeal of environmentalists who claimed in a petition that Sakhalin Energy's environmental impact assessment, was inadequate. Sakhalin Energy denied the claims and stated them as vague and inaccurate.[21] The environmental and social concerns came to a head at the end of November 2005 when the chief executive of WWF, Robert Napier, said that it would have a "negative impact on Sakhalin's people and environment".[citation needed] The WWF asserted that Sakhalin-2 threatens marine life as well as potentially damaging the local communities in the region. Sakhalin Energy responded to the WWF's assertion by saying that the project meets lenders' policies and that environmental and social issues have been met.[22]

In September 2006, Sakhalin Energy briefly suspended construction work on its pipelines. Oleg Mitvol, the deputy chief of the Russian Federal Service for Natural Resources, had announced in early August 2006 that, according to his data, Sakhalin Energy failed to take all actions required to eliminate the danger of the mud flow.[23] This was supported by President Vladimir Putin.[24]

Energy analysts believed alleged violations of the environmental regulations were a pretext by the Russian government to pressure Sakhalin Energy to sell a large stake to Gazprom.[1]

One key concern from environmental groups is that the Sakhalin-2 project will harm the western gray whale population. The whales summer feeding grounds are close to the project's offshore platforms in the Sea of Okhotsk.[25][26]

In 2006, the International Union for Conservation of Nature set up the Western Gray Whale Advisory Panel (WGWAP). Its members are marine scientists who give independent advice to Sakhalin Energy about managing any potential risks to the western gray whales.[27] The Russian Academy of Sciences has identified an increasing population of western gray whales in the Sea of Okhotsk during a photo identification research programme.[28] However, in February 2009 the WGWAP issued an urgent warning that the number of western gray whales observed in the primary (near shore) feeding area had decreased and the panel called for a "...moratorium on all industrial activities, both maritime and terrestrial, that have the potential to disturb gray whales in summer and autumn on and near their main feeding areas."[29] In a meeting in April 2009, the WGWAP reiterated its urgent plea for a moratorium. Sakhalin Energy then agreed to suspend its planned summer 2009 seismic testing.[30]

The Far Eastern Regional Hydrometeorological Research Institute is involved in regular monitoring of the western gray whales near the oil and gas developments on the Sakhalin Shelf.[31]

In December 2008, Sakhalin Energy won the Environmental Project of the Year award. The company’s protection of the Western Gray Whale population was recognised in the Environmental Efficiency of Economics category. The award was presented by Yuri Trutnev, the Russian Federation’s Natural Resources Minister.[32]

Other concerns are that the project will threaten the livelihood of tens of thousands of fishermen, destroy the key salmon fishing area off the island by dumping one million tons of dredging spoil waste into the sea, and imply a long-time threat of a large oil spill in the Sea of Okhotsk and Sea of Japan.[33] Dredging of Aniva Bay was completed in 2005. In 2005 the salmon harvest was recorded as an all-time high of more than 134,000 tonnes. In 2007 this record was overturned with a salmon catch of 144,181 tonnes.[34]

Sakhalin Energy paid compensation of $110,000 to the Russian Federation to cover potential fish impacts from the Sakhalin-2 project. This compensation was paid regardless of whether any impact was recorded on the fishing industry or not. Part of these funds was used to set up thriving salmon hatcheries on Sakhalin Island.[35]

Impacts on rivers and streams

According to the Sakhalin Environment Watch, the following environmental changes have occurred: