Political relations were incredibly strained under the rule of Mahathir bin Mohamad, who ruled from 1981 until 2003, and who was very critical of the foreign policy of the United States. However this doesn't stop United States from being one of the largest trading partner during his tenure. US was, and still is one of the biggest trading partner of Malaysia, and the other way around.

Two-way diplomatic ties between the two sovereign nations have thawed and subsequently warmed under the helm of the Najib Tun Razak administration. Malaysia is currently pursuing the Trans-Pacific Partnership treaty with the support of the US.

The United States is the largest foreign investor in Malaysia. American companies are particularly active in the energy, electronics, and manufacturing sectors. The cumulative value of U.S. private investment in Malaysia exceeds $10 billion. The United States is Malaysia's largest trading partner and Malaysia is the tenth-largest trading partner of the U.S. Annual two-way trade amounts to $49 billion. The United States and Malaysia launched negotiations for a bilateral free trade agreement (FTA) in June 2006. As of 2010 the two sides have yet to conclude an FTA despite eight rounds of talks.

The Malaysian government has indicated that it does not view the United States was only as an export market for Malaysian manufacture but also as a source of technology and talent, especially in the areas of technology and finance. During his April 2010 trip to the USA, Prime Minister Najib said, "It is a host of economic opportunities that we can leverage on if we have good bilateral relations with the US". Malaysia is also seeking more investment from the United States. Najib held-up the decision of Coca Cola to invest RM1 billion in a new bottling plant in Nilai as a model for future ventures.[1]

The United States and Malaysia enjoy strong security cooperation. Malaysia hosts the Southeast Asia Regional Center for Counterterrorism (SEARCCT), where over 2000 officials from various countries have received training. The United States is among the foreign countries that has collaborated with the center in conducting capacity building programmes. The U.S. and Malaysia share a strong military-to-military relationship with numerous exchanges, training, joint exercises, and visits.

In November 2010, Secretary of State Hillary Rodham Clinton made a 3 day bilateral visit to Kuala Lumpur.

Prime Minister Najib Tun Razak and President Barack Obama met just before the Nuclear Security Summit in Washington on 12 April 2010. This meeting was thought by many to represent a significant improvement in relations. This was their first one-on-one meeting. During their talk Obama sought further assistance from Malaysia in stemming nuclear proliferation which Obama described as the greatest threat to world security.[2] In June 2009 Najib and Obama discussed via telephone the global financial crisis, nuclear non-proliferation issues and two Malaysians detained at Guantanamo. [3] During the summit Najib stressed that Malaysia only supported nuclear programmes designed for peaceful purposes. Najib's attendance at the summit was part of a week-long official visit to the United States.[4] 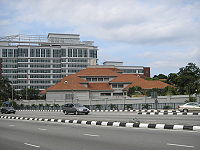 The American embassy in Kuala Lumpur

The American embassy in Malaysia is located in Jalan Tun Razak, Kuala Lumpur. The Principal U.S. Embassy Officials include:

Malaysian embassy to the United States

This article incorporates public domain material from websites or documents of the United States Department of State (Background Notes).[1]