Jahangirnagar University (Bengali: জাহাঙ্গীরনগর বিশ্ববিদ্যালয় Jahaŋgirnôgor Bishshobiddalôe) is a public university of Bangladesh. It is the one and only residential university in the country.[citation needed]

The university was established in 1970 by the government of Pakistan by the Jahangirnagar Muslim University Ordinance, 1970. During the first two years, it operated as a project.[citation needed] Its first Vice-Chancellor took up office on September 24, 1970. The first group of students, a total of 150, was enrolled in four departments: Economics, Geography, Mathematics and Statistics. Its formal inauguration was delayed until January 12, 1971, when the university was formally launched by Rear Admiral S. M. Ahsan, the Chancellor. The university was formally launched on 12 January 1970. 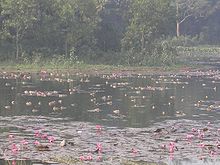 The university stands on the west side of the Asian Highway, popularly known as the Dhaka-Aricha Road, and is 32 kilometers from the capital. Spread over a land area of 697.56 acres (2.8 km²), the campus lies between the Bangladesh Public Administration Training Centre (BPATC) and the Savar Cantonment, on the north of which is the National Monument (Jatiyo Smriti Soudho).

The topography of the land, with its gentle rise and plains, is soothing to the eye. The bodies of water sprawling around the campus make an excellent habitat for winter birds that flock there every year by the thousands, making bird-watching a favorite pastime. The beauty of this university campus attracts tourists.

There are 28 departments under 5 faculties:

Faculty of Arts and Humanities

Faculty of Mathematical and Physical Science

There are four institutes for specialized research and training: 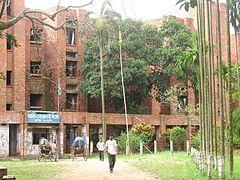 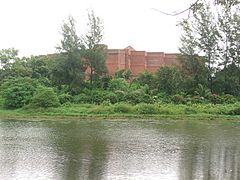 On 20 June 2009 the foundation stone for a new male dorm, Shahid Rafik-Jabbar Hall, was laid by the ex-Vice Chancellor Dr. Alauddin Ahmed. The new hall is expected to accommodate 576 students.

Other establishments and facilities

Bus services between the campus and Dhaka city are provided by the university. There is an open-air amphitheatre, the very first one in the country, inside the campus. A Teacher-Students Centre (TSC) is also established for different club activities for teachers and students.