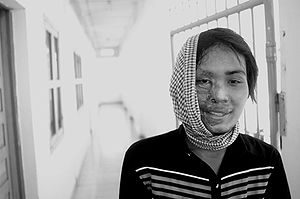 Acid throwing (acid attack[1] or vitriolage) is a form of violent assault.[2]. It is defined as the act of throwing acid onto the body of a person "with the intention of injuring or disfiguring him out of jealousy or revenge".[3] Perpetrators of these attacks throw acid at their victims, usually at their faces, burning them, and damaging skin tissue, often exposing and sometimes dissolving the bones.[4] The long term consequences of these attacks include blindness and permanent scarring of the face and body.[5][6][7]

In South Asia, acid throwing attacks have been used as a form of revenge for refusal of sexual advances, proposals of marriage and demands for dowry.[5] Scholars Taru Bahl and M.H. Syed say that land disputes are another leading cause.[7] In Bangladesh, where such attacks are relatively common, they are mostly a form of domestic violence.[11] Tom O'Neill of National Geographic reported that acid throwing is also used to enforce the caste system in modern India, where uppercaste individuals often attack Dalits for supposedly violating the order.[12] In Cambodia, it was reported that these attacks were mostly carried out by wives against their husbands' lovers.[8] According to New York Times reporter Nicholas D. Kristof, acid attacks are at an all time high in Pakistan and increasing every year. The Pakistani attacks he describes are typically the work of husbands against their wives who have "dishonored them".[13] In India, the number of acid attacks have been rising.[14] There had been 68 reported acid attacks in the state of Karnataka since 1999.[15]

According to a Rand Corporation commentary, hundreds of women in Pakistan and Afghanistan have been blinded or maimed "when acid was thrown on their unveiled faces by male fanatics who considered them improperly dressed".[16] Attacks or threats of attacks on women who failed to wear hijab or were otherwise "immodestly dressed" have been reported in other countries as well.[17][18][19][20] In Afghanistan in November 2008, extremists subjected schoolgirls to acid attacks for attending school.[21]

The chemical agents most commonly used to commit these attacks are hydrochloric acid and sulfuric acid. According to Mridula Bandyopadhyay and Mahmuda Rahman Khan, it is a form of violence primarily targeted at women. They describe it as a relatively recent form of violence, with the earliest record in Bangladesh from 1983.[5] The scholar Afroza Anwary points out that acid violence occurs not only in Bangladesh but also in Pakistan, China, Ethiopia and has occurred historically in Europe.[22]

In 2002, Bangladesh introduced the death penalty for throwing acid and laws strictly controlling the sales of acids.[23]

Under the Qisas law of Pakistan, the perpetrator may suffer the same fate as the victim, and may be punished by having drops of acid placed in his/her eyes.[24] This law is not binding and is rarely enforced according to a New York Times report.[13] Iran has a similar law, and sentenced an attacker to be blinded in 2008. However, as of July 31, 2011, Ameneh Bahrami pardoned her attacker, thereby absolving Majid Movahedi of his crime and halting the retributive justice of Qisas.[25][26]

Lower House of Parliament in Pakistan unanimously passed the Acid Control and Acid Crime Prevention Bill On May 10, 2011. As punishment, according to the bill individuals held responsible for acid throwing face harsh fines and life in prison. Over the past few years, acid throwing has been recognized by many countries as one of the latest and most excruciating forms of violence committed against women.

Indian acid attack survivor Shirin Juwaley founded Palash Foundation [31] to help other survivors with "psycho-social rehabilitation". She also spearheads research into social norms of beauty, speaks publicly, and blogs regularly at Do I Look 'Normal'?.[32] In 2011, the principal of an Indian college refused to have Juwaley speak at her school for fear that Juwaley's story of being attacked by her husband would make students "become scared of marriage".[33]

Reports of acid attacks from around the world