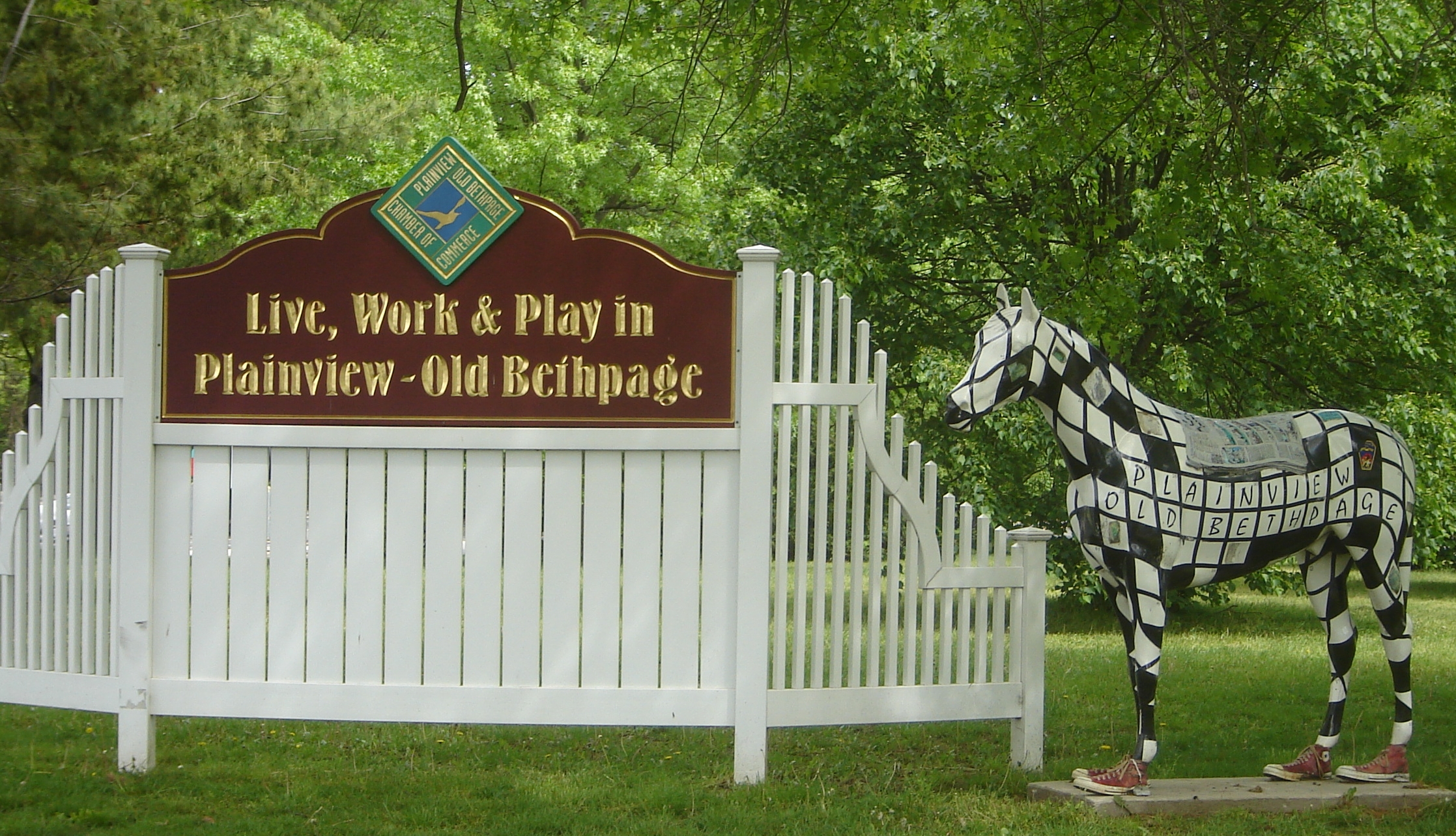 Plainview and its neighboring hamlet, , share a school system, library, fire department, and water district. Law enforcement for the community is provided by the , with the [http://www.police.co.nassau.ny.us/2nd_pct.htm Second Precinct] serving areas north of and [http://www.police.co.nassau.ny.us/8th_pct.htm Eighth Precinct] serving areas south of Old Country Road.

According to the , the CDP has a total area of 5.7 square miles (14.8 km²), all land. Plainview is located in the middle of Long Island, bordering Suffolk County.

The (I-495) and pass across the northern part of Plainview. NY-135 (Seaford-Oyster Bays Expressway) is a north-south route.

In 1885, residents petitioned the , for a local post office, but were turned down because the name Manetto Hill was already in use upstate. The town was then renamed, Plainview, for the "plain-view", the town had of the , from the top of Manetto Hill.

Plainview remained a farming community, famous for growing s, until . After the war, returning s, many anxious to leave , fueled massive development in the area, giving rise to so called, . Between 1950 and 1960, the town grew from a population of 1,155 to more than 35,000. [ [http://www.plainview-oldbethpage.com/history.cfm Plainview-Old Bethpage Chamber of Commerce History] ]

There were 8,556 households out of which 39.3% had children under the age of 18 living with them, 76.2% were married couples living together, 7.0% had a female householder with no husband present, and 14.5% were non-families. 13.1% of all households were made up of individuals and 8.7% had someone living alone who was 65 years of age or older. The average household size was 2.95 and the average family size was 3.22.

The operates one , , two , Howard B. Mattlin [ cite web |url= http://select.nytimes.com/mem/archive/pdf?res=FB0916FC3A541A7A93C5AB178AD95F448685F9 |title=Four-Part School is Planned on Long Island |author=Unknown |date=1960-11-29 |accessdate=2008-04-04|publisher= ] and Plainview-Old Bethpage Middle School, and four Parkway (due to its proximity to the ), Pasadena, Old Bethpage, and Stratford Road.There is also one Kindergarten Center, a school just for kindergarteners connected to Stratford Road Elementary School.

Two schools in Plainview have had the name Manetto Hill School. The original building was a one room school house, built in 1899. This building, which still stands, is adjacent to the much larger school of the same name, which was built in the 1950s. Today, both buildings are owned by the Mid-Island Y-JCC. The original building is immediately north of the JCC. The entrance to the building is on the front left side, but if you look closely on the right side opposite the entrance, you'll see the outline of what had been another door. When originally built, the building had separate entrances for boys and girls. The right door, now sealed off, was the girls entrance. The building now serves as an office for the Nassau-Suffolk Region Bnai Brith Youth Organization.

Old Bethpage also had its own one room school house, named the Little Red Schoolhouse. This building, which stood until the 1970s, was located, appropriately enough, on Schoolhouse Road, just off of Round Swamp Road. The building was torn down and the property developed into several houses.

The Plainview Library was first established in 1956, in rented space, in the Morton Village Shopping Center. Significant increases in population caused the library to outgrow this space. In March 1962, voters approved a $711,000 bond issue to pay for the purchase of a nearly three acre parcel of land and development of a new library building. [ [http://select.nytimes.com/mem/archive/pdf?res=F30C11FD3B5C137A93C2AA1788D85F468685F9 Plainview Library Voted] ] [ [http://select.nytimes.com/mem/archive/pdf?res=FB0A11FE3F5F107B93CAAB1788D85F468685F9 L.I. Library Seeks $190,000 to Buy Site] ] Almost exactly two years later, the library moved into its new facilities. [ [http://select.nytimes.com/mem/archive/pdf?res=F20913FC395415738DDDAA0894DB405B848AF1D3 Plainview Library to Be Closed] ] Since its construction, the building has had two major expansions to better serve the communities needs, including increased audio/visual and internet demands. [ [http://www.antonnews.com/plainviewoldbethpageherald/2001/10/12/news/ Expansion Planned at POB Library] ] [ [http://www.antonnews.com/plainviewoldbethpageherald/2003/01/10/news/expansion.html Update for Residents on Plainview Old Bethpage Public Library Expansion] ] In 2008, the library was made eligible to receive financing from the New York State Dormitory Authority, furthering its ability to develop and modernize its facilities in the future. [ [http://www.antonnews.com/plainviewoldbethpageherald/2008/07/18/news/ Key Support Obtained for Plainview-Old Bethpage Library] ]

Plainview has numerous community parks tucked in between homes. Its primary park is the 19 acre Plainview-Old Bethpage Community Park, located on Washington Avenue. [ [http://www.oysterbaytown.com/index.asp?Type=B_BASIC&SEC={F5EDEC47-D633-40FB-BE56-1D0F60C3B0EC}&DE={2B4A2912-BFDC-4265-BA6B-997B830AE593 Town of Oyster Bay- Parks Division] ] Opened in 1960, this park features an Olympic size pool, a children's pool, baseball/softball fields, tennis courts, racquetball/handball courts, basketball courts, a newly-built children's recreation playground, and trails through its woods. [ [http://select.nytimes.com/mem/archive/pdf?res=F30C11FC3D5C177A93C3AB178ED85F468685F9] ] [ [http://select.nytimes.com/mem/archive/pdf?res=F20E16FE395F13738DDDAB0994DB405B818AF1D3] ] During the summer the park runs a concession stand. Parks in Plainview are administered by either the Nassau County Department of Parks, Recreation and Museums or the Town of Oyster Bay. In addition, the town is home to a nature preserve called the Manetto Hills Park. This undeveloped parkland was the formerly known as the Shattuck Estate.

The [http://www.miyjcc.org/ Mid Island Y JCC] has many activities for youths as well as seniors.

The station, , channel 21, broadcasts from Plainview.

Until the 1980s there were several movie theaters in the community. Their patrons going to the mutliplexes which were built in Hicksville and Commack, all the theaters were converted to office or retail use.

* Century's Morton Village, Morton Village Shopping Center. This theater, located at the western end of the shopping center, was converted to retail space.
* Old Country Theater. Located at the intersection of Old Country Road and Manetto Hill Road. This theater was immediately west of the Shell gas station. The building was converted to an office building, housing mostly medical offices.
* RKO Plainview Twin. This movie theater was located behind the Plainview Centre on South Oyster Bay Road. This building was converted (and expanded) into today's .
* The Plainview, A Century Theater. This theater was located on South Oyster Bay Road (facing the Plainview Centre, noted above) and, therefore, technically, was in Hicksville, South Oyster Bay Road being the boundary line between Plainview and Hicksville. It was converted into an office building, housing mostly medical offices.

* , a graduate of Plainview JFK High School (Class of '72), is the head coach of the men's basketball team.

* , a graduate of Plainview JFK High School (Class of '74), is the head coach of the Virginia Tech men's basketball team.

* , one of four students killed in the , was born and raised in Plainview.

* Jamil Soriano, a graduate of Plainview-Old Bethpage JFK High School (Class of '99) and , had a brief career in the NFL as an offensive lineman. He was a member of the champion .

* Plainview was home to at least two grand Gold Coast estates.
** The Schwarzenbach Estate. Robert Schwarzenbach was a very successful textile manufacturer, who purchased an estate on Manetto Hill. The house was demolished long ago to make way for homes, however, one outbuilding still exists. It is located in the Manetto Hills Shopping Center. This building, originally the home provided to the estate's gardener, operated for many years as Malarkey's Tavern. The building presently houses a veterinarian's office. In addition, until the 1990s, a second building was still standing. This building, which had been the estate's chicken coop, was converted into a residence, where the gardener mentioned above eventually moved with his wife. It was located on Manetto Hill Road, just across from Nick Place.
** The Shattuck Estate. The Shattuck Estate was purchased by a successful New York City attorney, who lived there until he died in the 1960s. He was a member of the Shattuck family who owned the , which operated, among other things, a restaurant chain known as Schrafft Foods. [cite web |url=http://select.nytimes.com/gst/abstract.html?res=FB0914FA3B541B728DDDAC0994DB405B878FF1D3&scp=1&sq=frank+shattuck+schrafft&st=p |title=FRANK G. SHATTUCK OF SCHRAFFT'S DIES|author=Unknown|date=1937-03-15 |accessdate=2008-04-04 |publisher=] The property, which totals approximately convert|138|acre|km2, was almost developed in the 1970s until community activists forced the county to purchase the property and leave it as a nature preserve. [ [http://www.saveamericasforests.org/news/NewsdayLILifeCover.htm Save Americas Forests: Carl Ross] ] It is located on Washington Avenue and has no signage to indicate its presence. The property's main house still exists.

* The property known as the Nassau County Office Complex, located between the split of Old Country Road and Round Swamp Road, was once home to the Nassau County Sanitarium, a tuberculosis ward. Built on the Taliaferro Estate, primarily in Old Bethpage, the sanitarium was authorized by the Nassau County Board of Supervisors in 1930, and was completed in the early part of the same decade. [ http://www.nassaulibrary.org/bethpage/cphs/cphs-n.html Encyclopedia of theUnincorporated Village of Bethpage] ] [cite web |url=http://select.nytimes.com/mem/archive/pdf?res=FB0911F83C5A13738DDDAC0994DC405B828FF1D3 |title=$5,000,000 Bonds For Nassau County |author=Unknown|date=1932-04-14 |accessdate=2008-03-31|publisher=] As tuberculosis was brought under control, the complex of buildings was closed in the 1960s.

* At least one movie is known to have partially filmed in Plainview, 1998's, directed by Eric Mendelsohn.

* "Our Town: Life in Plainview-Old Bethpage 1600 Through Tomorrow", by Richard Koubek, published in 1987