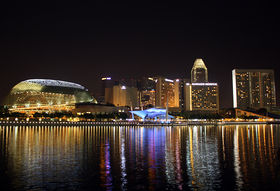 Marina Bay, with Marina Centre in the background.

Marina Bay is a bay near Central Area in the southern part of Singapore, and lies to the east of the Downtown Core. Marina Bay is set to be a 24/7 destination with endless opportunities for people to “explore new living and lifestyle options, exchange new ideas and information for business, and be entertained by rich leisure and cultural experiences”.[1] It is here where the most innovative facilities and infrastructure such as the underground “common services tunnel” are built and where mega activities take place.[2]

The URA Master Plan for Marina Bay aims to encourage a mix of uses for this area, including commercial, residential, hotel and entertainment, to ensure that the area remains vibrant round the clock. All developments in the area aim to promote the 3 premises of Explore, Exchange and Entertain:

Explore – New living options. Numerous high-end residential developments are in the pipeline, including One Shenton and Marina Bay Residences which will complement The Sail @ Marina Bay to provide a seamless work-live environment at the heart of the city.[1]

Exchange - Hub for global business. When completed, Marina Bay will double the size of the existing financial district, further cementing Singapore’s position as one of Asia's leading financial centres. It will provide 2.82 million square metres of office space, equivalent to the office space within Hong Kong's main business district, Central.

Entertain - Kaleidoscope of activities. In 2010, the opening of Marina Bay Sands Integrated Resort provided more entertainment options to the area, along with the other existing entertainment and shopping districts like Esplanade, Suntec City, Marina Square, Raffles City Shopping Centre.

The Singapore government also spent $35 million to complete the 3.5 km Waterfront Promenade around Marina Bay.[3] It includes a new eco-friendly visitor centre and The Helix linking Bayfront to Marina Centre where the Youth Olympic Park is located. The Promontory @ Marina Bay (formerly Central Promontory Site) will be used as an interim event space and public space used for activities such as theatres and carnivals.[4]

In 1970s, land reclamation was carried out at Marina Bay, forming what is today the Marina Centre and Marina South areas. In the reclamation process, Telok Ayer Basin was removed from the map, while the Singapore River's mouth now flows into the bay instead of directly into the sea. In 2008, Marina Barrage was built, turning Marina Bay and Kallang Basin into a new downtown freshwater Marina Reservoir, providing water supply, flood control and a new lifestyle attraction.

The inaugural Singapore Grand Prix took place on September 28, 2008 on a street circuit through Marina Bay.[5] It was also the first ever Formula One Grand Prix to be staged at night, with the track fully floodlit. Since its inception, The Float@Marina Bay has hosted events such as the National Day Parade, New Year’s Eve Countdown,[6] Singapore Fireworks Celebrations, as well as served as a spectator stand for the inaugural Formula 1 Singapore Grand Prix. The world’s largest floating stadium played host to the Opening and Closing Ceremonies of the inaugural Singapore Youth Olympic Games 2010.[7]

Singapore is the second Asian country after Japan to implement a comprehensive Common Services Tunnel system to distribute various utility services to all developments at Marina Bay. The network of purpose-built tunnels houses water pipes, electrical and telecommunication cables and other utility services underground. CST not only improves reliability of services supplies and allows easy maintenance and new installations, it also has 100% emergency backup services and the capacity for expansion to meet changing utility needs.[8]

In 2004, the Public Utilities Board publicly announced plans to construct a new downtown reservoir by damming the Marina Channel. This barrage was completed in 2008. Known as the Marina Barrage, it turned Marina Bay and the Kallang Basin into a confined freshwater reservoir with limited access to marine transportation to regulate the water quality.

The new reservoir provides another source of drinking water for Singapore, as well as a stable water level for a variety of water activities and events. The barrage will also prevent flooding in the Chinatown area.

There are currently 5 rail stations: City Hall, Raffles Place, Marina Bay, Promenade and Esplanade stations serving Marina Bay. By 2020, the 360 hectares Marina Bay will boast a comprehensive transport network as Singapore's most rail-connected district.[9] The first three new MRT lines will open between 2012 and 2014. By 2018, the Marina Bay district will have six or more MRT stations, all no more than five minutes of each other. A comprehensive pedestrian network including shady sidewalks, covered walkways, underground and second-storey links will ensure all-weather protection and seamless connectivity between developments and mass rapid transit stations.[10] Within Greater Marina Bay, water taxis will even double up as an alternative mode of transportation.

Gardens by the Bay

In line with Singapore's image as a Garden City, construction of three waterfront gardens is underway at Marina Bay. The 101-hectare Gardens by the Bay site is made up of Bay South, Bay East, and Bay Central across the mouth of the Singapore River. Phase 1 of the Gardens is scheduled to open in 2011.[11] All three gardens will be interconnected via a series of pedestrian bridges to form a larger loop along the whole waterfront and linked to surrounding developments, open public spaces, transport nodes and attractions.[1] Through plant-based edutainment, horticultural displays, garden craftsmanship and floral artistry, Gardens by the Bay will provide another source of recreation for Singaporeans and tourists alike.[11]

Completed in July 2010, the Marina Bay City Gallery is an eco-friendly building by the waterfront promenade along Marina Boulevard. The gallery showcases a large-scale model of Marina Bay, by incorporating the latest multimedia technology, visitors can navigate their way around the model to experience and appreciate the new city coming up around Marina Bay.

A 3.5 km waterfront promenade linking the necklace of attractions at the Marina Centre, Collyer Quay and Bayfront areas was completed in 2010. Visitors can look forward to a stroll along the Mist Walk, dancing water jets and enjoy a panoramic view of the Bay from any point along the promenade. [10]