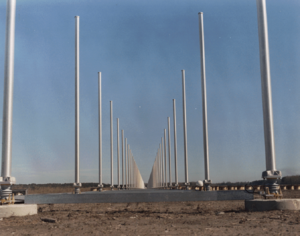 Over-the-horizon radar, or OTH (sometimes also beyond the horizon, or BTH), is a design concept for radar systems to allow them to detect targets at very long ranges, typically up to thousands of kilometers. Several OTH radar systems were deployed starting in the 1950s and 60s as part of early warning radar systems, but these have generally been replaced by airborne early warning systems instead. OTH radars have recently been making something of a comeback, as the need for accurate long-range tracking becomes less important with the ending of the Cold War, and less-expensive ground based radars are once again being looked at for roles such as maritime reconnaissance and drug enforcement.

Radio waves, a form of electromagnetic radiation, tend to travel in straight lines. This generally limits the detection range of radar systems to objects on their horizon due to the curvature of the Earth. For example, a radar mounted on top of a 10 m (33 ft) mast has a range to the horizon of about 13 kilometres (8.1 mi), taking into account atmospheric refraction effects. If the target is above the surface this range will be increased accordingly, so a target 10 m (33 ft) high can be detected by the same radar at 26 km (16 mi). In general it is impractical to build radar systems with line-of-sight ranges beyond a few hundred kilometers. OTH radars use various techniques to see beyond the horizon, making them particularly useful in the early warning radar role. 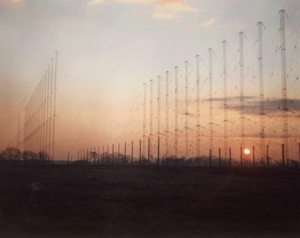 Since the signal reflected from the ground, or sea, will be very large compared to the signal reflected from a "target", some system needs to be used to distinguish the targets from the background noise. The easiest way to do this is to use the Doppler effect, which uses frequency shift created by moving objects to measure their velocity. By filtering out all the backscatter signal close to the original transmitted frequency, moving targets become visible. This basic concept is used in almost all modern radars, but in the case of OTH systems it becomes considerably more complex due to similar effects introduced by movement of the ionosphere itself.

The resolution of any radar depends on the width of the beam and the range to the target. For example a radar with a 1/2 degree beamwidth and a target at 120 km (75 mi) range will show the target as 1 km (0.62 mi) wide. Because of the long ranges at which OTH radars are used, the resolution is typically measured in tens of kilometers. This makes the backscatter system almost useless for target engagement, although this sort of accuracy is more than adequate for the early warning role. In order to achieve a beamwidth of 1/2 degree at HF, an antenna array several kilometers long is required.

Much of the early research into effective OTH systems was carried out under the direction of Dr. William J. Thaler at the Naval Research Laboratory; The work was dubbed "Project Teepee" (Thaler's project). Their first experimental system, MUSIC (Multiple Storage, Integration, and Correlation), became operational in 1955 and was able to detect rocket launches 600 miles (970 km) away at Cape Canaveral, and nuclear explosions in Nevada at 1,700 miles (2,700 km). A greatly improved system, a testbed for an operational radar, was later built in 1961 as MADRE (Magnetic-Drum Radar Equipment) at Chesapeake Bay. As the names imply, both systems relied on the comparison of returned signals stored on magnetic drums, then the only high-speed storage systems available.

The first truly operational development was an Anglo-American system known as Cobra Mist. Built starting in the late 1960s, Cobra Mist used an enormous 10 MW transmitter and could detect aircraft over the western USSR from its location in Suffolk. When the system started testing in 1972, however, an unexpected source of noise proved to render it unusable. They eventually abandoned the site in 1973, the source of the noise never having been identified.

The Soviets were also working on similar systems during this time, and started operation of their own experimental system in 1971. This was followed shortly thereafter by the first operational system, known in the west as Steel Yard, which started operation in 1976.

OTH-B coverage from stations in Maine and Oregon.

The USAF's Rome Laboratory had the first US success with their AN/FPS-118 OTH-B.[1] A prototype with a 1 MW transmitter and a separate receiver was installed in Maine, offering coverage over a 60 degree arc between 900 to 3,300 km. A permanent transmitting facility was then built at Moscow AFS, a receiving facility at Columbia Falls AFS, and an operational center between them in Bangor. The coverage could be extended with additional receivers, providing for complete coverage over a 180 degree arc (each 60 degree portion known as a "sector"). GE Aerospace was awarded the development contract, expanding the existing east coast system with two additional sectors, while building another three-sector system on the west coast, a two-sector system in Alaska, and a one-sector system facing south. In 1992 the Air Force contracted to extend the coverage 15 degrees clockwise on the southern of the three east coast sectors to be able to cover the southeast US border. Additionally, the range was extended to 3,000 miles (4,800 km), crossing the equator. This was operated 40 hours a week at random times. Radar data was fed to the U.S. Customs/Coast Guard C3I Center, Miami; Joint Task Force 4 Operations Center, Key West; U.S. Southern Command Operations Center, Key West; and U.S. Southern Command Operations Center, Panama.

With the end of the cold war, the influence of the two senators from Maine was not enough to save the operation and the Alaska and southern-facing sites were canceled, the two so-far completed western sectors and the eastern ones were turned off and placed in "warm storage," allowing them to be used again if needed.[2]

By 2002, the west coast facilities were downgraded to "cold storage" status, meaning only minimal maintenance was performed by a caretaker. Research was begun into the feasibility of removing the facilities. After a period of public input and environmental studies, in July 2005 the U.S. Air Force Air Combat Command published a "Final Environmental Assessment for Equipment Removal at Over-the-Horizon Backscatter Radar - West Coast Facilities" [3].

A final decision was made to remove all radar equipment at the west coast sector's transmitter site outside Christmas Valley, Oregon and its receiver site near Tulelake, California. This work was completed by July 2007 with the demolition and removal of the antenna arrays, leaving the buildings, fences and utility infrastructure at each site intact.[4] 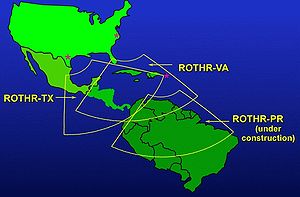 Coverage of the three US Navy ROTHR stations in Texas, Virginia, and Puerto Rico

The US Navy also created their own system, the AN/TPS-71 ROTHR (Relocatable Over-the-Horizon Radar), which covers a 64 degree wedge-shaped area at ranges between 500 to 1,600 nautical miles (925 to 3,000 km). ROTHR was originally intended to keep track of ship and aircraft movement over the Pacific, and thus allow coordinated fleet movements well in advance of an engagement. A prototype ROTHR system was installed on the isolated Aleutian Island of Amchitka, Alaska, monitoring the eastern coast of Russia, in 1991 and used until 1993. The equipment was later removed into storage. The first production systems were installed in the test site in Virginia for acceptance testing but were then transitioned to counter the illegal drug trade, covering Central America and the Caribbean. The second production ROTHR was later set up in Texas, covering many of the same areas in the Caribbean, but also providing coverage over the Pacific as far south as Colombia. It also operates in the anti-drug trafficking role. The third, and final, production system was installed in Puerto Rico, extending counterdrug surveillance past the equator, deep into South America.

The Soviets had also studied OTH systems starting as early as the 1950s. Their first experimental model appears to be the Veyer (Hand Fan) that was built in 1949. The next serious Soviet project was Duga-2, built outside Nikolayev (on the Black Sea coast near Odessa). Aimed eastward, Duga-2 was first started on 7 November 1971, and was successfully used to track missile launches from the far east and Pacific Ocean to the testing ground on Novaya Zemlya.

This was followed by their first operational system, known in the west as Steel Yard, which first broadcast in 1976. Built outside Gomel, near Chernobyl, it was aimed northward and covered the continental USA. Its loud and repetitive pulses in the middle of the shortwave radio bands led to it being known as the Russian Woodpecker by amateur radio (ham) operators. The Soviets eventually shifted the frequencies they used, without admitting they were even the source, largely due to its interference with certain long-range air-to-ground communications used by commercial airliners. A second system was set up in Siberia, also covering the continental USA, as well as Alaska. 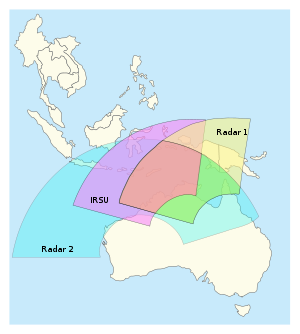 A more recent addition is the Jindalee Operational Radar Network developed by the Australian Department of Defence in 1998 and completed in 2000. It is operated by No. 1 Radar Surveillance Unit of the Royal Australian Air Force. Jindalee is a multistatic radar (multiple-receiver) system using OTH-B, allowing it to have both long range as well as anti-stealth capabilities. It has an official range of 3,000 kilometres (1,900 mi) but in 1997 the prototype was able to detect missile launches by China[5] over 5,500 kilometres (3,400 mi) away.

Jindalee uses 560 kW as compared to the US's OTH-B's 1 MW, yet offers far better range than the US 1980s system, due to the considerably improved electronics and signal processing.[6]

The French have developed an OTH radar called NOSTRADAMUS[7] (stands for New Transhorizon Decametric System Applying Studio Methods) during the 1990s. It entered in service for the French army in 2005, but is still in development. It is based on a star shaped antenna field used for emission and reception (monostatic) able to detect every aircraft at more than one thousand kilometers, in a 360 degree arc. The frequency range used is from 6 to 30 MHz.

A number of OTH-B and OTH-SW radars are reportedly in operation in China. However, few details are known of these systems.[8][9][10]

An entirely different approach to over-the-horizon radar is to use creeping waves or electromagnetic surface waves at much lower frequencies. Creeping waves are the scattering into the rear of an object due to diffraction, which is the reason both ears can hear a sound on one side of the head, for instance, and was how early communication and broadcast radio was accomplished. In the radar role, the creeping waves in question are diffracting around the Earth itself, although processing the returned signal is quite difficult. Development of such systems became practical in the late 1980s due to the rapidly increasing processing power available. Such systems are known as OTH-SW, for Surface Wave.

The first OTH-SW system deployed appears to be a Soviet system positioned to watch traffic in the Sea of Japan, while a newer system has recently been used for coastal surveillance in Canada. Australia has also deployed a High Frequency Surface Wave Radar[11].