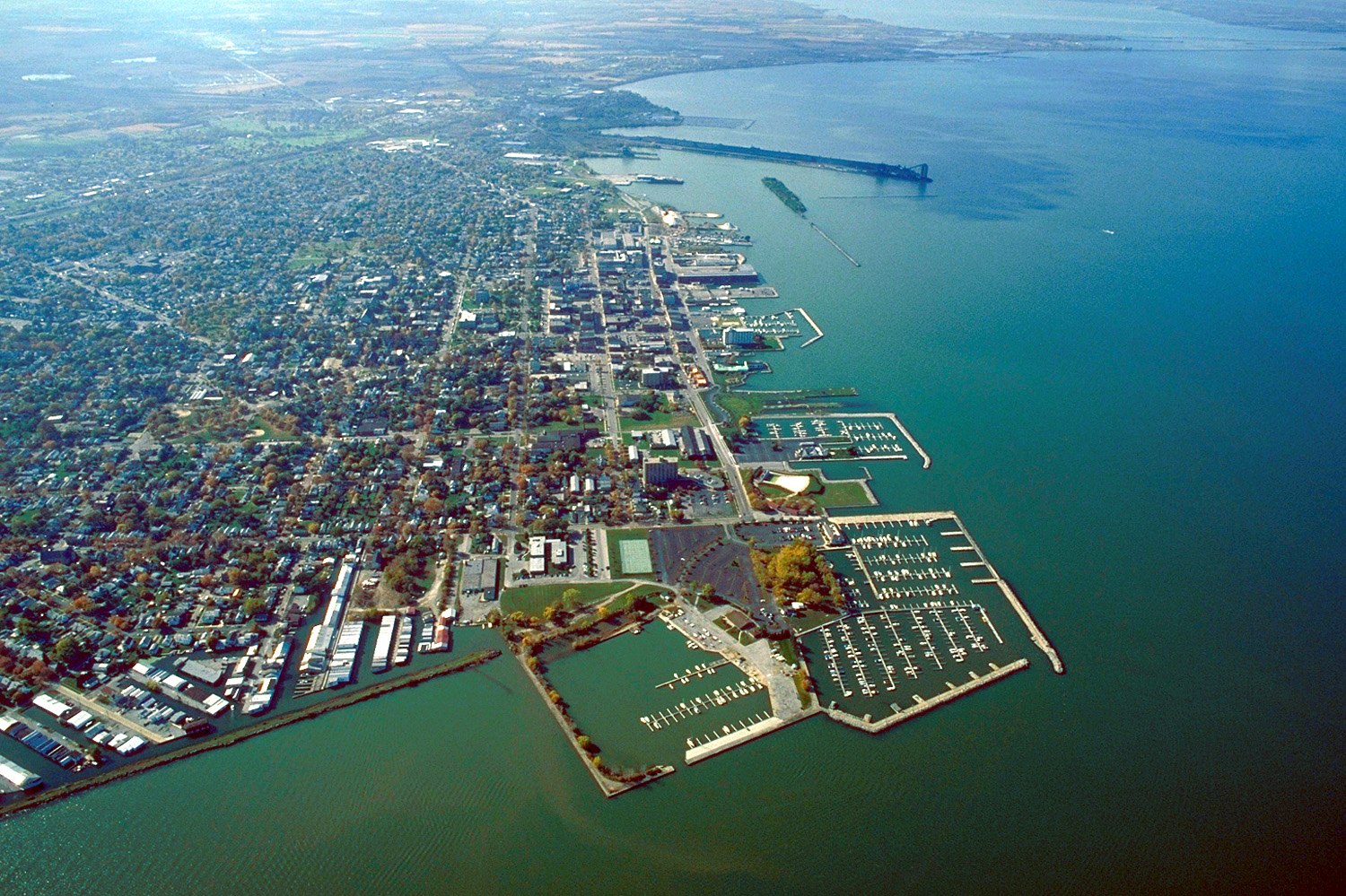 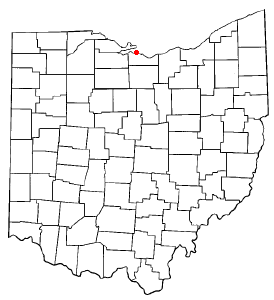 mapsize = 250px
map_caption = Location within the state of

Sandusky is a city in the of and the of Erie County.GR|6 The municipality is located in northern Ohio and is situated on the shores of , almost exactly half-way between Toledo to the west and Cleveland to the east.

Sandusky is one of Ohio's most popular tourist destinations. The city is home to the , an amusement park and entertainment management company, as well as its flagship amusement park, . Cedar Point features the largest collection of roller coasters in the world as well as many former record holders. Like most Ohio citiesFact|date=June 2008, Sandusky's population has decreased since the late 1970s.

The has designated Sandusky as a .

Fort Sandusky was a British trading and military outpost established around 1794. The Native Americans that inhabited the immediate surrounding area were the Seneca, displaced at the outset of the . The generally accepted theory is that the name "Sandusky" is an Anglicization of the phrase "San Too Chee", meaning "cold water." A less accepted theory is that the that the city was named after a Polish fur trader by the name of Antoni Sadowski or . [ [http://www.sandusky.lib.oh.us/public/local_history_faq.asp] ]

The Greater Sandusky area was a safe haven and a new start for of the refugees of the Revolutionary War in Connecticut. Norwalk, the Huron County seat (just south of Erie County) is named for , as is New London, a small town south of Norwalk.

Established as Portland in 1816, [ [http://www.eriecountyohiocofc.com/StudentInfo.htm Erie County Chamber ] ] the name was changed two years later to Sandusky. Norwalk was also established in 1816; at the time, both were growing towns of a unified Huron County. Not long after, thanks to the growth of both towns, Erie County, Ohio's second smallest (in land area), came into being. The county encompassed newly-rechristened Sandusky's far west side, Vermilion to the east, and Norwalk's northern line to the south.

Prior to the abolition of in the United States, Sandusky was a major stop on the . As depicted in 's novel "", many slaves seeking to reach freedom in Canada made their way to Sandusky, where they boarded boats crossing to the port of in .

Downtown Sandusky was designed according a modified known as the Kilbourne Plat after its designer. The original street pattern featured a grid overlaid with streets resembling the symbols of . Hector Kilbourne was a surveyor who laid out this grid in downtown Sandusky. He was the first Worshipful Master of the Sandusky Masonic Lodge.

Sandusky was the site of groundbreaking for the on September 17, 1835. Currently, Battery Park Marina is located on original site of the MR&LE Railroad. The tracks that ran through downtown Sandusky have since been removed due to most of the downtown industrial area being re-used for other purposes including mainly marina dockage. The coal docks located west of downtown still use a portion of the original MR&LE lines.

A bus station is located on Route 250 south of Sandusky in Perkins Township.

and passenger/bicycle ferry boats (M/V Jiimaan and M/V Pelee Islander) owned by the Owen Sound Transportation Company run on a regularly-scheduled seasonal basis from Sandusky to to and .

Sandusky is served by a daily newspaper, "", and several local radio stations. owns and operates 102.7 FM, which features a hot adult contemporary format, 100.9 FM (licensed to ), which plays classic rock, and 1450 AM which plays standards. There are several options for in the area, including WVMS 89.5 FM, run by the as a relay of in Cleveland; WGGN 97.7 FM in Castalia, which plays music and is co-owned with religious 52; and a translator for the at 88.3 FM. Elyria-Lorain Broadcasting operates several stations serving the Sandusky area, including 96.1 FM (country music) and 95.3 FM (modern adult/adult alternative) and WLKR 1510 AM (sports talk). Stations from the Toledo, , , Windsor and Fremont areas also reach the Sandusky area.

* , best known for her portrayal of on the series The Wire, was born in Sandusky.
* ; sports broadcaster, co-host of "" on
* (1821-1905), Civil War Financier, Railroad Magnate, and Philanthropist, was born in Sandusky
* , defensive back for the , 1972-1981.
* Lee Evans, wide receiver for the ,
* , head coach of the
* , / .
* , NCAA national champion basketball player and 1976 Olympic gold medalist.
* , 1963 and currently a motivational speaker; the section of Route 2 that runs through Erie County is named "Jackie Mayer Miss America Highway".
* , chief justice of the since 1987.
* , offensive lineman for the of the NFL and a seven-time er, played for the Blue Streaks of Sandusky High School, who retired his jersey number in a special half-time ceremony on October 20, 2006.
* , 2-time Div I NCAA wrestling champion for The Ohio State University and professional mixed martial arts fighter

* passed through Sandusky in 1842. He describes it in "" as "sluggish and uninteresting enough,... something like the back of an English watering-place, out of the season."
*Sandusky was the setting for the film "", but was only seen in one brief scene in the beginning of the movie (most scenes were shot in , Canada). The "Sandusky Register", the city's newspaper, was also asked to provide newspaper boxes to be used as props for the movie. The movie depicted the non-existent "Sandusky International Airport."
*Sandusky (specifically, 1984 Sandusky) was also the setting for the 1998 film "Edge of Seventeen" which featured several recognizable location shots. Footage from Cedar Point is used (some of which is 1984 vintage) though no scenes with the film's cast were shot in the park, which is called "Crystal Shores" in the film.
*The character of Sugar, played by in the film "", hailed from Sandusky.
*In "" episode, "Alias Micky Dolenz", Micky says he is from Sandusky.
*Local legend holds that a now-defunct Sandusky restaurant, the Porterhouse (that once stood on the corner of Wayne and Water Streets), was the originator of the . This story appears to be apocryphal.
*Dudley (Booger) Dawson's supposed illegitimate child was from Sandusky in
*In 's book , New York cop Mike Rogo's wife Linda was from Sandusky, though she didn't care to talk about it.
*In the movie, "Network", 's character says the following referring to response from a show on the network, "Herb's phone hasn't stopped ringing! Every god damn affiliate from Albuquerque to Sandusky! The response is sensational!" Sandusky does not have a broadcast TV affiliate, nor did it during the time of the film.
*The 1985 movie "Fast Forward" is about a fictional group of dancers from Sandusky who travel to New York to compete in a talent competition.
*The 1990 movie "", which is set in the nearby town of , includes scenes shot in Sandusky.
*In the 2004 movie "", Dr. Keats (played by ) says his brain injury clinic is funded out of Sandusky.