The Center for Global Development (CGD) is a non-profit think tank based in Washington, D.C. that focuses on international development. It was founded in November 2001 by former senior U.S. official Edward W. Scott, director of the Peterson Institute for International Economics, C. Fred Bergsten, and Nancy Birdsall. Birdsall, the former Vice President of the Inter-American Development Bank and former Director of the Policy Research Department at the World Bank, became the Center's first President.

CGD's stated mission is "to reduce global poverty and inequality by encouraging policy change in the U.S. and other rich countries through rigorous research and active engagement with the policy community.[1] Recently, Foreign Policy Magazine's Think-Tank Index listed CGD as one of the top 15 think-tanks in the US.[2] The Center considers itself to be a 'think and do' tank, with an emphasis on producing research that is channeled into practical policy proposals.

CGD is also known for creating the program called advance market commitments to encourage vaccine development for specific diseases. The G7 endorsed the approach and the Gates Foundation and five countries gave $1.5 billion to create a vaccine against strains of pneumonia.[4]

CGD conducts research within a range of topics that impact global poverty and people of the developing world. Topics include aid effectiveness, education, globalization and global health, as well as the impact of trade and migration on development.

In 2008, CGD produced a compilation of essays, edited by Nancy Birdsall, called "The White House and the World: A Global Development Agenda for the Next U.S. President." These essays give policy recommendations to solve international problems, such as global health, foreign aid policy, migration, global warming and direct foreign investment.[7]

CGD recently published a report on the dangers of drug resistance in “The Race against Drug Resistance: When Medicines Fail,” which the Global Health team launched on June 14, 2010.[8]

In addition to printed publications,[9] CGD maintains several blogs, including Views From the Center and the Global Health Policy blog.

The Center considers itself a “think and do” tank, and thus has multiple initiatives to implement their policy suggestions. These, initiatives attempt to give specific policy recommendations to organizations while creating a dialogue.[11] 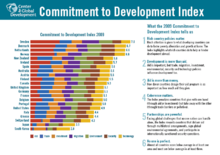 In 2003, David Roodman created the Commitment to Development Index with Foreign Policy magazine and Mapping Worlds. The Commitment to Development Index (CDI) [5] ranks and analyzes nations’ financial and political commitments to development every year. The index uses interactive graphs and analyzes how countries contribute to development in seven policy areas: aid (both quantity as a share of income and quality), trade, investment, migration, environment, security, and technology.[12]

Secretary Clinton speaks at CGD about development in the 21st century.

CGD hosts about 90 public and private events a year that draw more than 7,000 participants.[24] Events have featured speakers such as U.S. Secretary of State Hillary Clinton, President of Nigeria Goodluck Jonathan, Paul Romer, U.K. Secretary of State for International Development Andrew Mitchell and many others.[25]

During Secretary Hillary Clinton’s visit to CGD on January 6, 2010, she emphasized the importance of development and said it was “time to elevate development as a central pillar of our foreign policy and to rebuild USAID into the world's premier development agency.”[26]