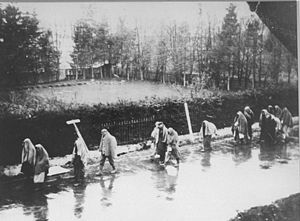 Dachau concentration camp inmates on a death march through a German village in April 1945.[1][2]

The death marches refer to the forcible movement between Autumn 1944 and late April 1945 by Nazi Germany of thousands of prisoners from German concentration camps near the war front to camps inside Germany. 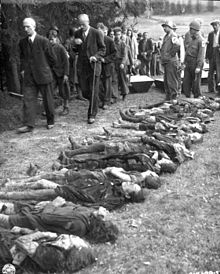 May 11, 1945 German civilians are forced to walk past bodies of 30 Jewish women starved to death by German SS troops in a 300-mile march across Czechoslovakia. Buried in shallow graves in Volary, Czechoslovakia, the bodies were exhumed by German civilians working under direction of Medics of 5th Infantry Division, U.S. Third Army. Bodies will be placed in coffins and reburied in cemetery in Volary. 5thMed. Bn. 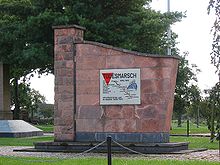 Memorial of Death march from Sachsenhausen concentration camp in Blievenstorf

Towards the end of World War II in 1944, as Britain and the United States approached the concentration camps from the west, the Soviet Union was advancing from the east. Trapped in the middle of the allied advance, the SS, not wanting the world to know about the Holocaust, decided to abandon the camps, moving or destroying evidence of the various atrocities they had committed there. Thousands of prisoners were killed in the camps before the marches commenced. These executions were deemed crimes against humanity during the Nuremberg trials.

Although the prisoners were already weak or ill after enduring the routine violence, overwork and starvation of concentration camp life, they were marched for dozens of miles in the snow to railway stations, then transported for days at a time without food, water or shelter in freight carriages originally designed for cattle. On arrival at their destination, they were then forced to march again to the new camp. Any prisoners who were unable to keep up due to fatigue or illness were immediately executed by gunshot.

The first evacuation of Majdanek inmates started in April 1944. Prisoners of Kaiserwald were transported to Stutthof or killed in August.

Mittelbau-Dora was evacuated in April 1945.

The SS killed large numbers of prisoners in gas chambers, by lethal injection and by starvation before the marches, and shot dead many more both during and after the death marches. Seven hundred prisoners were killed during one ten-day march of 8,000 Jews, including 6,000 women, who were being moved from camps in the Danzig region, which is bordered on the north by the Baltic Sea. Those still alive when the marchers reached the coast were forced into the sea and shot.[3]

Elie Wiesel, Holocaust survivor and winner of the 1986 Nobel Peace Prize, was forced on a death march, along with his father, Shlomo, from Buna to Buchenwald, which he describes in his 1958 book Night.[4]

The best known of the death marches took place in January 1945, when the Soviet army advanced on occupied Poland. Nine days before the Soviets arrived at the death camp at Auschwitz, the SS marched nearly 60,000 prisoners out of the camp toward Wodzisław Śląski (German: Loslau), 35 miles away, where they were put on freight trains to other camps. Approximately 15,000 prisoners died on the way.[3] Atlas of the Holocaust, Martin Gilbert, map of forced marches.