The guest ranch, also known as a dude ranch, is a type of ranch oriented towards visitors or tourism. It is considered a form of agritourism. 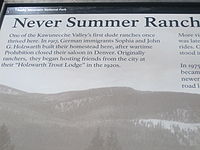 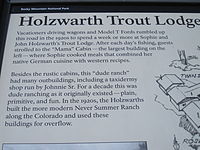 Guest ranches arose in response to the romanticization of the American West that began to occur in the late 19th century. In 1893, historian Frederick Jackson Turner stated that the United States frontier was demographically, "closed." This in turn led many people to have feelings of nostalgia for bygone days, but also, given that the risks of a true frontier were gone, allowed for nostalgia to be indulged in relative safety. Thus, the person referred to as a "tenderfoot" or a "greenhorn" by westerners was finally able to visit and enjoy the advantages of western life for a short period of time without needing to risk life and limb.

The Western adventures of famous figures, like Theodore Roosevelt, were made available to paying guests from cities of the East, called "dudes" in the West. In the early years, the transcontinental railroad network brought paying visitors to a local depot, where a wagon or buggy would be waiting to transport people to a ranch. Experiences varied. Some guest ranch visitors expected a somewhat edited and more luxurious version of the "cowboy life," while others were more tolerant of the odors and timetable of a working ranch. While there were guest ranches prior to the 20th century, the trend grew considerably after the end of World War I, when postwar prosperity, the invention of the automobile and the appearance of Western movies all increased popular interest in the west. In 1926 the Dude Ranchers Association was founded in Cody, Wyoming to represent the needs of this rapidly growing industry.

In the United States, guest ranches are now a long-established tradition and continue to be a popular vacation destination. Depending on the climate, some guest ranches are open only in the summer or winter, others offer "year-round" service in all four seasons. College students are often recruited to work at guest ranches during the summer months. Common jobs offered to college students include: housekeeping, wrangler, dining staff, and office staff or babysitters. A number of working ranches have also survived lean financial times by taking in paying guests for part of the year.

Some guest ranches cater to hunters. Some feature native wildlife such as whitetail deer, mule deer, bison or elk. Others feature exotic species imported from other regions and nations such as Africa and India. Both types of ranches are highly controversial. While many traditional ranches allow hunters and outfitters on their land to hunt native game, the act of confining game to guarantee a kill is considered unsporting by some people.

The introduction of non-native species on ranches is even more controversial because of concerns that these "exotics" may escape and contaminate the gene pool of native species or spread previously unknown disease. The advocates of hunting ranches argue in turn that they help protect native herds from over-hunting and the stocking of exotic species actually increases their numbers and may help save them from extinction.