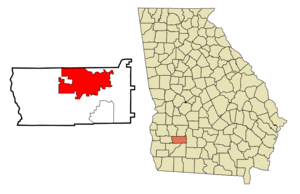 Albany is a city in and the of Dougherty County, Georgia, , in the southwestern part of the state.GR|6 It is the principal city of the .

The total area is 0.59% water. Albany lies in a belt of rich farmland in the East Gulf coastal plain on the banks of the Flint River.

There were 28,620 households out of which 32.3% had children under the age of 18 living with them, 36.6% were married couples living together, 25.2% had a female householder with no husband present, and 34.0% were non-families. 28.8% of all households were made up of individuals and 9.6% had someone living alone who was 65 years of age or older. The average household size was 2.54 and the average family size was 3.14.

The area where Albany is located was formerly inhabited by the Creek Indians. They called it "Thronateeska" after the found near the river. The Creeks used this stone to make heads and other tools.

businessman settled along the Flint River in October, 1836 and named the new town Albany, after New York's state capital because they both sit at the head of a river.

Some historians have cited that Albany was not founded by Nelson Tift, but was founded by a group of Quakers who settled along the banks of the Flint River-having exhausted the navigatable waters of the river. These Quakers named their new found settlement "Albany" because it was the same distance up the Hudson River to Albany, New York, as it was up the Flint River to their new settlement. The historical accounts of the day are that Nelson Tift actually purchased the land from the Quakers on account of the fact that the Quakers were forced to return to New York having encountered a hostile climate and Native American populuation; and, as a consequence, Nelson Tift did not actually found Albany, Georgia. Fact|date=July 2008

The city was laid out by Alexander Shotwell in 1836. The city was incorporated by an act of the General Assembly of Georgia on December 27, 1838 [http://www.albany.ga.us/city_commission/cc_index.htm] .

Surrounded by a prosperous farming region which produced large amounts of , Albany was in a prime location for transportation of cotton by s on the river, over which Tift had Horace King, a former slave, build a in 1858. Albany later became a hub and there is an exhibit on trains at the Thronateeska Heritage Center, which is located at the old .

In 1841 the Flint river flooded the city.

On April 11, 1906, the Carnegie Library opened downtown. It functioned as a library until 1985. In 1992 it reopened as the headquarters of the Albany Area Arts Council.

In 1911 the first flight in the U.S. was inaugurated and the first was struck, both in Albany.

In 1912 the U.S. Postoffice and Courthouse building opened downtown.

In 1925 the Flint river again flooded the city.

In 1937 Chehaw park was established as a part of a program.

In the summer of 1940 a Major Peacock approached the Albany Chamber of Commerce about the possibility of locating an Army Air Corp training base in Albany. Construction under the Army Corp of Engineers began March 25, 1941. The field was temporarily deactivated between August 15, 1946 and September 1, 1947 but then reactivated to support the , with the stationing units and support units there. A number of other missions were hosted at [cite web
url=http://www.strategic-air-command.com/bases/Turner_AFB.htm
title=Turner AFB
accessdate=2006-05-11] as the base was renamed. Among them were the 1370th Photomapping Group [cite web
url=http://www.1370th.com/index.htm
title=1370th Photomapping and Charting Group
accessdate=2006-05-11] , and refueling and maintenance functions. The base was transferred to control of the in 1967 and was deactivated in 1974. In 1979 the Miller Brewing Company purchased part of the property to build a new brewing plant. [cite web
url=http://www.turnerfield-miller.com
title=History of Turner Field Albany Georgia
accessdate=2006-05-11]

In 1951 the Marine Corps established a large base on the eastern outskirts of the city.

In 1994 there was another severe flood, caused by Tropical Storm Alberto, killing 14 people and displacing 22,000.

In 1998 the Flint river crested at 35 feet, once again flooding parts of Albany.

Albany in "The Souls of Black Folk"

In ' "" (1903), Albany was featured in several chapters as a typical African American rural town in the South. In the book, Du Bois discussed the culture, agribusiness, and economy of the region. Du Bois described Albany as a small town where local sharecroppers lived. Much of the soil had been depleted of nutrients because of intense cotton cultivation. Once a bustling community full of cotton gins and toiling slaves, the place had declined steadily in the late 1800s as the Civil War and drastically altered the demographics and economy of Albany. Du Bois wrote that Dougherty County had many decaying one-room slave cabins and unfenced land. Despite the problems, local folklore, customs, and the culture made Albany a unique town in the South.

Elected officials include a and six city , all of whom serve four-year terms. The commissioners represent the wards from which they are elected. There is also an appointed who acts as the . The city has been governed by a city commission and city manager since January 14, 1924. [http://www.albany.ga.us/city_commission/cc_index.htm] .

Although Albany has expanded considerably in the past few decades, it is still able to retain the population and environment of a Southern town. Today, although the city is still surrounded by groves, s, s and s, almost none of the population is employed in .

, and the are the largest employers. , , and are also important foundations of Albany's economy and the city acts as a hub for commerce in southwest Georgia.

(ABY) is serviced by , a regional carrier for Delta and by . Both UPS and use the airport as a sorting facility.

Freight rail service is provided by and .

offers intercity transportation to locations throughout the U.S., , and

Albany Transit System, operated by the city from 1974, provides fixed-route and paratransit services in Albany and Dougherty county, including service to the airport. The main transfer station is downtown.

Albany is located on (Georgia-Florida Parkway).

Albany is home to the historically black (ASU) and . Both are part of the .

Albany is the home of a not-for-profit regional health system with a 26 county cachement area with [http://www.phoebeputney.com] at its hub. Palmyra Medical Centers [http://www.palmyramedicalcenters.com/] is a for-profit hospital.

Museums and the arts

* was named in 1873 by county clerk William Cruger after his former home of Albany, Georgia. [http://www.rootsweb.com/~txshacke/albany.htm]
* The new U.S. federal in downtown Albany is dedicated to .
* Nicknames for Albany include:
** Artesian City
** Good Life City
** Capital of the World
** Hunting Capital of the World
*In 1972 the manager of a local theater, Mr. Jenkins, was convicted of "distributing obscene material" for showing the film "Carnal Knowledge", in .
*Some Albanians pronounce the name as allBENny with emphasis on the second syllable, while others pronounce it ALLbany with the emphasis on the first syllable.
*Albany is the only city in the entire nation that has had a Super Bowl MVP, a World Series MVP, and an Olympic Gold Medalist.