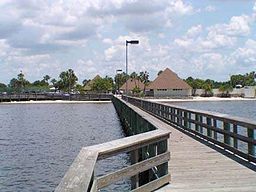 Port Charlotte is a census-designated place (CDP) in Charlotte County, Florida, United States. The population was 46,451 at the 2000 census. It is part of the Punta Gorda Metropolitan Statistical Area. 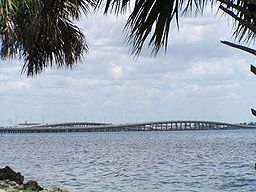 The first people to call the Port Charlotte area home were the nomadic paleo-indians as they chased big game such as woolly mammoth southward during the last ice age around 10,000 BCE.[3] At the time, Port Charlotte was not a coastal area;[3] the peninsula of Florida was much wider than it is today and much drier. As the ice melted, the sea level rose and Florida assumed the shape and climate it has today and the paleo-indians gave way to the Calusa, the "shell people." The Calusa thrived on the southwest Florida coast and numbered over 50,000 when the first Spaniards reached the peninsula in the 16th century.[4] The arrival of the Europeans was devastating to the Calusa, as diseases such as small pox and measles decimated the population. Eventually the Seminole would arrive from points to the north and establish themselves on the peninsula.[4]

In 1819 Florida was ceded by the Spanish and became a U.S. territory and in 1845, Florida became the 27th state. For the first 100 years of statehood, the area around Port Charlotte was mostly undeveloped. Maps of the area at the turn of the 20th century show that most of the roads and railroads leading into southwest Florida had bypassed the Port Charlotte area.[5][6] Aside from some cattle raches and small farming, the area was mostly uninhabited. This would change when the post-World War II boom opened people's eyes to the possibility of developing land in Florida.

In the 1950s, the now defunct General Development Corporation led by the Mackle brothers decided to take advantage of the Florida land boom and developed land primarily on both of Florida's coastlines. Among the areas they planned and developed was the Port Charlotte area. Ultimately, Port Charlotte would become the most populated center of population in Charlotte County, although like most GDC developments, Port Charlotte remained unincorporated land.

Port Charlotte was severely impacted by Hurricane Charley on August 13, 2004. The hurricane, predicted to hit Tampa as a category 2 hurricane, took a last-minute right hand turn and intensified into a category 4 storm as it made landfall near Charlotte Harbor and caused severe damage in the city of Punta Gorda and in the Port Charlotte area.[7] The storm's 145 mph maximum sustained winds destroyed almost half of the homes in the county and caused heavy ecological damage to sensitive wetlands in the area...[7][8]

Port Charlotte has a warm humid subtropical climate (Köppen climate classification: Cfa) bordering on a tropical wet and dry climate (Köppen climate classification: Aw).[9] The summers are long, hot and humid with frequent afternoon thunderstorms. The winters are mild to warm with a pronounced drop in precipitation. Year round, the diurnal temperature change averages around 20 degrees Fahrenheit (11 degrees Celsius).