Reed Arena is a sports arena and entertainment venue located at the corner of Olsen Boulevard and Kimbrough Boulevard in College Station, Texas. This facility is used for Texas A&M University basketball games and commencement ceremonies, concerts, trade shows, family entertainment, and Texas A&M student programs, including the on-campus Aggie Muster. The building replaced the G. Rollie White Coliseum, and is named for Dr. & Mrs. Chester J. Reed, a 1947 A&M graduate whose donations made the new arena possible.[2]

In 2005, Reed Arena served as the site of men's and women's first round NIT games, as the men played Clemson and the women played Tulsa.[3]

In recent years, Reed Arena has gained a reputation as one of the most hostile arenas in the nation, coinciding with the men's and women's Aggie basketball teams rise to national prominence. This is partly due to a group of students calling themselves the Reed Rowdies, which have been instrumental in helping to create an energetic fan atmosphere during basketball games similar to that of football games at Kyle Field.

The arena is surrounded by four parking lots, which hold a combined 1500 cars, and is also within walking distance of a 3,750 capacity parking garage and numerous other parking lots. Generally event parking costs between $3 and $5.

Basketball games are played on a parquet wood floor which made its debut on August 12, 1998. The floor contains 210 sections, each weighing 190 pounds, and generally takes six adults five hours to assemble. Both the men's and women's basketball team make use of a full size practice gym on the bottom floor of the arena, conveniently located near the Aggie locker rooms.[4] 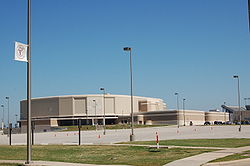 Exterior of Reed Arena with the Cox-McFerrin Center

In February 2006, the 12th Man Foundation, a fund raising organization associated with Texas A&M Athletics, announced plans for an effort to build the Cox-McFerrin Center, a 40,000-square-foot (3,700 m2) addition to Reed Arena, providing new men's and women's basketball locker rooms, practice gyms, and player lounges. On February 2, 2007, the A&M System Board of Regents approved a revised plan, increasing the size of the facility to 69,400 square feet (6,450 m2) and a total cost of $21.5 million.[1]

Following Hurricane Katrina in 2005, Texas A&M opened Reed Arena as a temporary shelter to house over 200 evacuees from New Orleans. Although school was barely in session and there was minimal notice, the students and staff of A&M prepared the facility, setting up several hundred beds on the arena floor and making arrangements for the evacuees to get new clothes and have medical checks. Aggie students organized a child care facility, and Aggie athletes escorted many of the teenagers to the Aggie Rec Center to play basketball.[6] Less than three years later, Reed Arena was again opened as a temporary shelter for people fleeing Hurricane Rita, and again for those seeking shelter from Hurricane Ike in 2008.[7] It also became temporary home to Tulane University's basketball team for the 2005-2006 season. 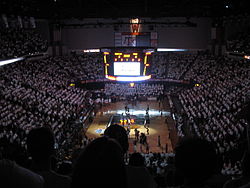