The Dwight Look College of Engineering is the engineering school of Texas A&M University in College Station and is home to more than 10,700[1] engineering students in 12 departments.

The first engineering department at Texas A&M appeared in 1880, four years after the foundation of the school, with the creation of the Department of Engineering, Mechanics, and Drawing. For the next several years, the curriculum focused on practical training to assist students in finding industrial and vocational work. By 1887, separate departments had been created for mechanical engineering and for civil engineering and drawing.[4]

To assist the United States during World War I, the Department of Mechanical Engineering shifted focus to train blacksmiths, automobile mechanics, machinists, draftsmen, general mechanics, and pipe fitters for the war. Following the war, the department's enrollment continued to increase, and began offering courses in power, industrial and railway, or transportation engineering. In the 1930s, these options were eliminated, while others, including aerodynamics, air-conditioning and physical metallurgy began to be offered. During the 1936-1937 school year, the Department of Mechanical Engineering was first accredited by the Engineering Council for Professional Development, now known as the Accreditation Board for Engineering and Technology Inc.[4]

By 1940, the engineering school comprised almost half of Texas A&M's enrollment. As World War II dawned, the school again assisted the war effort, with the Department of Mechanical Engineering faculty volunteering to teach at military bases throughout the state. Following the war, college introduced a Ph.D. program, and industries and government began to sponsor research within the college.[4] 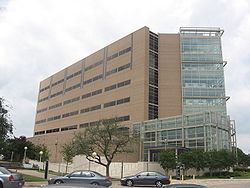 * from 2011 edition of US News and World Report