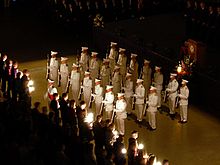 2007 Aggie Muster at Reed Arena. The Ross Volunteers stand at attention as candles are lit for the deceased.

Aggie Muster is a time-honored tradition at Texas A&M University. Muster officially began on April 21, 1922 as a day for remembrance of fellow Aggies. Muster ceremonies today take place in approximately 320 locations globally including Kabul, Afghanistan, and Baghdad, Iraq. The largest muster ceremony occurs in Reed Arena, on the Texas A&M campus.[1] The "Roll Call for the Absent" commemorates Aggies, former and current students, who died that year. Aggies light candles, and friends and families of Aggies who died that year answer “here” when the name of their loved one is “called”. Campus muster also serves as a 50th year class reunion for the corresponding graduating class.[2] Some non-campus muster ceremonies do not include the pageantry of the campus ceremony, and might consist simply of a barbecue.[1]

On June 26, 1883, former students of Texas A&M University gathered together to "live over again their college days, the victories and defeats won and lost upon the drill field and in the classroom."[2][3] The same year, the Ex-Cadets Association established the "Roll Call for the Absent." The event grew into a loosely organized annual tradition but did not have a permanent date set aside until several decades later, when it merged with a different tradition.[4]

In 1889, Texas A&M administrators declared that April 21 (which in Texas is known as San Jacinto Day, the anniversary of the Battle of San Jacinto whereby Texas gained its independence from Mexico) would be an official school holiday. Each year on San Jacinto Day, the cadets would have a track and field competition. In 1903, then-A&M President Davis Houston encountered much student resistance to the idea of cancelling the holiday. Houston agreed to retain the holiday as long as the students promised to use it for constructive purposes.[4]

Beginning April 21, 1903, the tradition of Aggie Muster merged with the Texas Independence celebration, featuring both athletic events and banquets to honor alumni. For the next fifteen years, the event would occur unchanged as a day of play and fellowship. In 1918, however, focus changed from play to the World War. Many former students were in the military, fighting overseas, and were unable to return to campus to bond with their fellow students. A&M President Bizzell encouraged former students and the student body to gather together wherever they were on April 21, becoming the first Aggie administrator to officially support the tradition.[4]

In the early 1920s, as Aggies returned from the war and settled throughout Texas, A&M clubs, which aimed to reunite former students within a certain geographical area, began forming. With the proliferation of these groups, the Muster tradition began to have a more formal atmosphere. In 1923, the student radio station WTAW broadcast a statewide program for over two dozen Aggie groups who had gathered at points across Texas.[4] The March 1923 Texas Aggie urged that "If there is an A&M man in one-hundred miles of you, you are expected to get together, eat a little, and live over the days you spent at the A&M College of Texas."[2]

The tradition of reading the roll call of the dead aloud began in 1924, with the addition of the song Taps in 1927. The following year, 23 former students were added to the roll call.[4] During the Great Depression, Aggies continued to celebrate April 21, calling it "A. and M. Day," and using the gathering to help raise money to support students and alumni, as well as advancing a job placement plan.[4]

The most well-known Aggie Muster took place during World War II in 1942 on the Philippine island of Corregidor. At this time, Corregidor was the last American stronghold against the Japanese forces in the Philippines, and Japanese artillery and warplanes were constantly attacking. An estimated 1.8 million pounds of shells pounded the island in one five-hour stretch. The American artillery commander on Corregidor was Brigadier General George F. Moore, a 1908 graduate of Texas A&M. With the help of Major Tom Dooley, class of 1935, Moore gathered the names of 25 other Aggies under his command. Despite the fierce fighting as the Japanese laid siege to the island, on April 21, 1942 Moore held a roll call—known as muster in army terms—calling the names of each of the Aggies under his command.[4][5]

Only twelve of the twenty-five survived the battle and the POW camps to which the survivors were sent.[4] Dooley told a United Press correspondent about the gathering, and the reporter sent an article back to the USA about the 25 Aggies who had "Mustered." The story captured the imagination of the country and "helped boost American spirits at a time a lift was badly needed."[5] (T. R. Louder, the last known Corregidor Muster survivor, died on May 21, 2001, and his name was called at Muster 2002 in College Station.)

Association of Former Students Executive Secretary E. E. McQuillen, Class of 1920, is given credit for refocusing San Jacinto Day as a remembrance for fallen Aggies. He changed the April 21, 1943 celebration to be the first known as an Aggie Muster and sent packets to each A&M club, Aggie Moms club, and to military bases around the world with a detailed program of events for April 21. It included greetings from the A&M President and the Muster Poem. The response was overwhelming, with 10,000 Aggies worldwide mustering in 500 locations. The following year McQuillen added a list of recently deceased Aggies to the packets, asking each local group to choose names from the list and call them aloud during their ceremony, and "as each name is called a comrade will answer 'Here.'"[4]

In April 1945, just eight weeks after Corregidor had been recaptured by the Allies, three Aggies conducted a Muster "on the Rock." They wrote letters home to McQuillen to let him know about their impromptu Muster. A year later, on April 21, 1946, an even larger Muster occurred on Corregidor. With the War now over, A&M held a special Victory Homecoming Muster on Easter morning in 1946. Over fifteen thousand Aggies gathered at Kyle Field to listen to a speech by General Dwight D. Eisenhower. Lt. Col. Tom Dooley also presented the "Muster Tradition," and conducted a W.W. II Roll Call. To represent the 900 Aggies who died in World War II, the names of the four deceased WW II Aggie Medal of Honor winners were called.[4]

Muster became a student organization in 1950, and students now coordinate all aspects of the campus Muster in College Station, Texas.

Randy Matson, the keynote speaker at the 2000 campus Muster, vowed that "'we're here (tonight) to pledge that none of you will be forgotten as long as there are two Aggies left in the world.'"[6]

The largest Muster each year, with over 12,000 in attendance, is held in Reed Arena on the campus of Texas A&M University in College Station, Texas.[7] This campus Muster is dedicated to the fifty-year reunion class of that year, demonstrating unity among Aggies.[6] During the day a Camaraderie Barbecue is held at the Academic Plaza around noon to rekindle the spirit of the original Muster celebration. The evening Muster ceremony begins with a keynote speaker.[7][8] Several poems are read including "The Last Corps Trip", which imagines a Judgement Day in which Aggies are welcomed into heaven with open arms.[9] Following the readings, the room is darkened for the Roll Call of the Absent. This Roll Call honors Aggies who have died since the last Muster. As the names are called, a family member or friend answers "Here," and lights a candle in remembrance of that person.[7][8] Following the Roll Call, the Ross Volunteers give a 21-gun salute, and buglers play Silver Taps, an especially evocative version of the military's mournful melody of farewell."[6]

Smaller Musters are held in over 300 other locations, including in Kosovo, Germany, Istanbul, Seoul, and almost every county in Texas.[7] Names can be called at multiple Muster ceremonies. For example, a person may be honored at the Muster in his hometown, while the Muster in the town where his parents live may also choose to call his name.[3] Many of the smaller Musters do not have the pagentry of the campus Muster. In all cases, a Roll Call for the Absent is held, but the ceremony may take place in conjunction with a barbecue or fish fry, to allow for fellowship.[1]