Melbourne Water is a government owned statutory authority that controls much of the water system in Melbourne, Victoria, Australia including the reservoirs, and the sewerage and drainage system that services the city.

Melbourne Water is wholly owned by the Victorian State Government. It manages Melbourne's water supply catchments, sewage, rivers and major drainage systems throughout the Port Phillip and Westernport region. Governance of Melbourne Water is by an independent Board of Directors in conjunction with the Minister for Water. Customers include the metropolitan retail water businesses (such as City West Water, South East Water and Yarra Valley Water.[1]), other water authorities, local councils and the land development industry.[2] Melbourne water primarily operates under the Water Industry Act 1994 and the Water Act 1989.[3] Melbourne Water was formed by the merger of Melbourne and Metropolitan Board of Works and a number of smaller urban water authorities in 1992. The Victorian Water Industry Association (VicWater) is the peak industry association for water companies in Victoria.

In 1891, the Melbourne and Metropolitan Board of Works (MMBW) was formed to manage Melbourne's water supply system. Its responsibility covered the Yan Yean Reservoir (supplemented by the Toorourrong Scheme), the first stage of the Maroondah Scheme and six metropolitan service reservoirs.

Silvan Reservoir was completed in 1932 to regulate the increased flows in the O'Shannassy Aqueduct from the Upper Yarra River and Coranderrk Creek diversions. Water flowed out of Silvan Reservoir through the Mount Evelyn Aqueduct; the aqueduct was later replaced by pipes but is still visible in places with the Mount Evelyn Aqueduct Walk alongside.

In response to the severe drought of 1967–68, the diversion of Starvation, McMahons, Armstrong and Cement Creeks commenced between 1968 and 1971.

A reservoir was completed at Greenvale in 1971, with a capacity of 27,000 megalitres, to meet the growing need in the western suburbs, especially during summer.

Following the 1967–68 drought, construction of Cardinia Reservoir was started in 1969 with it being filled to its 287,000-megalitre capacity in 1977, bringing Melbourne's total storage capacity to 610,000 megalitres.

To improve transfer capacity between Upper Yarra and Silvan reservoirs, and to enable water harvested from the Thomson River to be transferred to Cardinia Reservoir, the 2.1-metre diameter Yarra Valley Conduit and Silvan-Cardinia main were built in 1975.

In 1969 work commenced on diverting part of the flow of the Thomson River in Gippsland into the Upper Yarra River catchment. The final stage of the Thomson project concluded in May 1983 with an extension of the Thomson-Yarra Tunnel and completion of the dam wall. Thomson Reservoir has a storage capacity of 1,068,000 megalitres.

The Sugarloaf Reservoir Project, including a major pumping station and water treatment plant, was completed in 1981, increasing Melbourne's total storage capacity by 95,000 megalitres. Sugarloaf uses water pumped from the Yarra River at Yering Gorge and water transferred from Maroondah Reservoir via the Maroondah aqueduct. Sugarloaf is important in meeting peak summer demand in the northern parts of Melbourne.

In 1991, the Melbourne and Metropolitan Board of Works was merged with a number of smaller urban water authorities to form Melbourne Water.

In 2008, work commenced on the North South Pipeline from northern Victoria's Eildon and Goulburn Valley area to Melbourne. Another project being planned to avert a water shortage in Melbourne is a desalinisation plant to be built on Westernport Bay in Victoria's south-east. 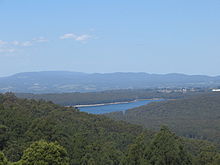 Around 80% of Melbourne's water is sourced from uninhabited forests in the Yarra Ranges and Central Highlands. In excess of 1,570 square kilometres is reserved for water catchment. These forests primarily consist of Mountain Ash. Catchment areas have been closed to the public for over 100 years .[10][11]

In addition to the reservoirs in the table above, water is harvested from minor tributaries of the Yarra River[12] (Badger, Armstrong, Cement, McMahons and Starvation Creeks), Watts River (Donnelly, Sawpit and Grace Burn Creeks) and, from north of the Dividing Range, Silver and Wallaby Creeks via a number of diversion weirs.

Clearfell logging is permitted in some of these catchment areas which in turn is reducing Melbourne's water supply since young regrowth forest uses more water than existing forest.[13][14] [12] It is estimated that 30 thousand megalitres of water could be saved per annum by phasing out logging. This represents 6% of Melbourne's annual usage.[15]

The Seawater Desalination Plant is a $(AUS)3.1 billion desalination plant to be built in the Wonthaggi region of the Bass Coast by the end of 2011.[16] The plant is to provide an additional 150 gigalitres of water each year.[17][18] Construction of the plant is scheduled to commence in mid-2009.[19] This project represents the single biggest boost to Melbourne's water system since the approval of the Thomson Dam in 1975. While this project will supply water for Melbourne, it is being managed by the Department of Sustainability & Environment (DSE) as a Public-private partnership (PPP). DSE will award the tender for design, build and operation to another company who will in turn supply the water to Melbourne Water.

Northern Sewerage Project is a major infrastructure project to increase the capacity of the sewerage system in Melbourne's growing northern suburbs. It will also help protect the Merri and Moonee Ponds Creeks by virtually eliminating sewage overflows that can occur after heavy rain.