The Nagoya Pan-Pacific Peace Exposition (1937) (名古屋汎太平洋平和博覧会, Nagoya hantaiheiyo heiwa hakurankai?) was a world's fair held in what is now part of the Minami Ward of Nagoya city, Japan from 15 March to 31 May in 1937.

Sponsored by the Japanese government and with HIH Prince Higashikuni Naruhiko as chairman, the Nagoya Pan-Pacific Peace Exposition was intended to promote industry, transportation, education, science, construction, architecture, social welfare, tourism, fine arts and crafts. Each of the participating nations or colonies had its own pavilion to promote its products and culture, and each of the prefectures of Japan (with the exception of Tottori and the external territories of Taiwan, Karafuto and Korea) also had a pavilion. In addition, major Japanese industries also sponsored their own pavilions.

Over the two and a half months of operation, the Nagoya Exhibition received more than 4,800,000 visitors, or roughly four times the population of the greater Nagoya area at the time. Daily attendance averaged at 61,643 people. 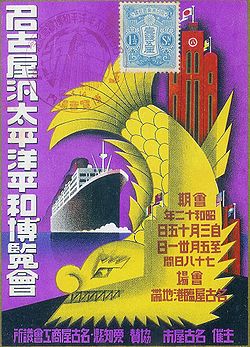 The Second Sino-Japanese War erupted only two months after the Exposition closed.