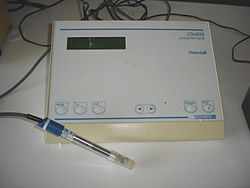 Industrial conductivity probes often employ an inductive method, which has the advantage that the fluid does not wet the electrical parts of the sensor. Here, two inductively-coupled coils are used. One is the driving coil producing a magnetic field and it is supplied with accurately-known voltage. The other forms a secondary coil of a transformer. The liquid passing through a channel in the sensor forms one turn in the secondary winding of the transformer. The induced current is the output of the sensor.

Over a limited temperature range, the way temperature affect conductivity of a solution can be modeled linearly using the following formula: